There’s a classic saying in theater, “acting is reacting”, meaning it’s not about reciting lines, it’s about listening to your fellow performers, and making your lines a response to the other characters. Which is all great advice – but what if you’re doing a monologue and you have no one to react to? Does that mean monologues aren’t really ‘acting’?

Fortunately, there are a few warmups and tips you can utilize to make your monologues just as believable, character-driven, and reaction-based as if you were performing with a whole cast of other actors. Just like with any sport, or singing, or dancing, warmups are important to an actor, and there are several good ones that work especially well to set you up for success with your monologue work, beginning with your mental preparation. 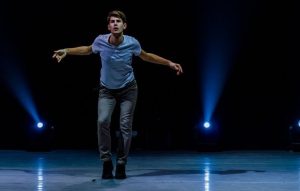 A monologue actor’s best friend is something I call “the invisible scene partner”. This is sort of like a more sophisticated variation on an invisible friend.

If your monologue comes from a scene with other characters, you can base your ‘scene partner’ on the character whose line or action prompts your lines, and imagine them doing or saying something to get you started. And since this character is in your own mind, you can use someone (or something) else if that helps motivate your scene.

For example, I recently coached a student doing a monologue from The Graduate, as Benjamin reacting to Mrs. Robinson. He imagined one of his friends’ mothers coming on to him and it got him right into the awkward, embarrassed mood of the monologue.

The ‘invisible scene partner’ can be anything that creates the feeling you want – for one student doing an original comic monologue breaking up with someone she really liked but wasn’t good for her, she remembered how hard it was to give up chewy candy when she got her braces on, so she imagined talking to a giant package of Skittles. (Obviously you wouldn’t want to use something that silly for a dramatic monologue, but it worked perfectly for comedy!)

Other students have done love scenes to their dogs, or imagined they were talking to a favorite food or article of clothing. Having a specific mental image goes a long way toward making up for the fact that you don’t have anyone else in the scene to react to.

The next mental warmup for acting monologues is to make sure you’re clear on ‘the precipitating event’. That’s the thing that happens (or what is said) that jumpstarts your monologue. This way, you really can be reacting to something.

Again, you can sometimes use the script, looking at what happens in the play right before the monologue you’ve chosen. But if it’s a stand-alone monologue, or the script isn’t giving you the right frame of mind, zero in on what your character’s mood is, what their intention is (why are they saying these words?), and then create a scenario that helps you get started.

Warm Up Your Body 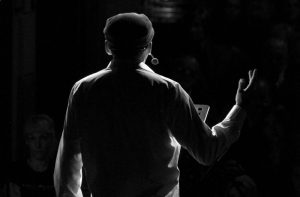 Once you’ve done the mental work, and you’ve memorized your monologue, you want to warm up your body. One of my favorite physical warmups is to stand up and let myself slump. Then, I imagine my feet are grounded into the floor. And then imagine I have a helium balloon attached to the top of my head.

I don’t yank my head up straight, but I let the vision of that balloon gently lift my head up. Then I imagine I’m wearing a heavy backpack that is opening up my chest and guiding my shoulder blades out and down my back – again, not yanking anything, but letting the thought guide my posture. Once I’ve gotten to a good neutral posture, I imagine something that generates the feeling of my monologue – sadness, excitement, fear, love – and let my body absorb that feeling.

Warm Up Your Face

Any theater warmups work to prepare for acting monologues. These can be breathing exercises, shaking nerves out of the hands, whatever you like (and there are tons available online). But for monologues it’s especially important to have good diction. Particularly because the audience won’t have any other actors or the rest of the scene to create context. So the focus is all on you.  Tongue twisters are great (again, tons are online). And I especially love lip trills (vibrating your lips like you’re imitating a motor). Particularly because they both warm up the mouth and release any tension.

And anything that opens up your facial expressions is useful, especially if it’s an online or videotaped monologue – simply opening up the eyes and mouth as wide as possible, then scrunching, and back & forth a few times, is an easy way to limber up your facial muscles.

Know Where Your Focus Is

Finally, you’ll want to figure out where your focus is. At an audition where I was one of the directors, an actor directed his entire monologue right to me, as if I were the ex-wife he was yelling at. Needless to say, it was extremely uncomfortable, so you don’t want to direct your monologue right at anyone in particular.

If you’re performing live, either for an audience or a panel at an audition table, use that ‘invisible scene partner’ and put them/it someplace just off to the side. Or in the middle of the audience but not at a particular person.  Likewise, if you’re performing for a video camera or a zoom screen, put your focus just to the side of the lens (but not too far to the side – the audience wants to see your face, not your profile!)

Use These Audition Warm Up Tips to Jump Start Your Performance

Acting monologues can be challenging, but they’re a great way to dive into an interesting character, as well as an essential part of acting auditions. And using these tips and warmups can help boost your enjoyment – and your success!