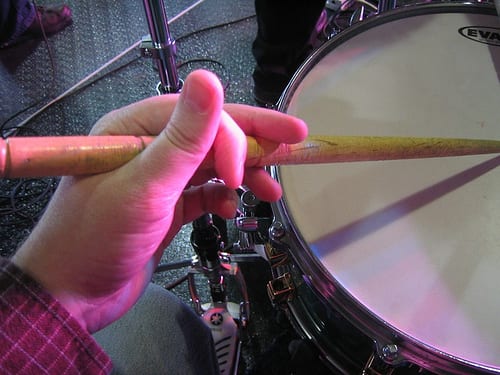 Learning proper grip for holding your drum sticks is one of the first things you’ll tackle in your drum lessons. To start with, you’ll need to know the differences between traditional grip and matched grip. Here, TakeLessons student counselor Nick S. offers a quick overview of what you need to know…

Matched grip is a technique that uses the overhand position, with both hands gripping the drumstick the same way. Matched grip comes in three forms: French grip, German grip and American grip.

French grip consists of the two palms facing each other, with the thumbs directly on top of the drum stick. The stick is primarily moved by using the fingers rather than with the wrist like the German grip. This technique is usually used by timpanists due to its greater degree of finesse.

German grip offers more power by placing the palms parallel with the floor and the thumbs on the side of the drum stick. The stick is primarily moved by the wrist, rather than the fingers.

American grip is a hybrid of the French and German grips, offering the greatest overall benefits. The palms are faced at about a 45-degree angle and the thumbs are placed just above the side of the stick. The stick is moved by using a combination of wrist (power) and fingers (finesse & speed).

Traditional grip is primarily used by jazz drum set players, marching drum lines and snare drum. This technique uses an overhand American grip with the right hand and an underhand grip for the left hand.

To execute the traditional grip of your left hand, start with your left hand out as if you were to shake someone’s hand. Place the last 2-4 inches of the drum stick in the crook of your thumb and rest the front of the stick on the first knuckle of your ring finger. Next, place the pad of the thumb on the first knuckle of your index finger.  Keep the middle finger relaxed and on the stick, and the ring and pinky finger should stay relaxed underneath the stick. The fundamental motion of the left hand is like turning a doorknob and uses the thumb as the primary finger to bounce the stick.

Learning how to hold your drumsticks correctly is important, since poor technique can lead to strain and injuries. Readers, which grip do you use? Weigh in by leaving a comment, or stop by our Facebook page to discuss!

You might also like…
– Practice Drum Rudiments Without Getting Bored
– Video: How Are Drum Sticks Made?
– Drumming With Your Weaker Hand: 3 Helpful Tips