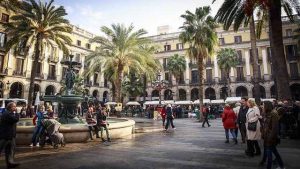 From health benefits to more cultural awareness, learning a new language is one of the most wholesome awesome things you can do in your life and for your life.

If you are thinking about learning a new language, I’m here to tell you why Spanish is one of the best languages to choose. Even though there are many good reasons to learn any language, today I will give you ten reasons why Spanish ranks high among the top languages to acquire.

1. You will benefit from a bilingual brain:

If this is your first time learning a second language, then I have good news for you. Bilingualism has been linked to beneficial changes in the brain, as evident as an increase in grey matter volume. Being bilingual has shown to alter key structures in the brain related to multitasking, increase focus and attention.

The constant switch from first language to target language stimulates the brain and creates muscle memory that can benefit you in other areas of your life, such as trying to focus your attention at work while there are many distractions around you. It is also said that a bilingual brain ages differently since “a bilingual brain can compensate for brain deterioration”, says Psycholinguist Mark Antoniou in his article How a second language can boost the brain. So think of bilingualism as a long term “risk free” investment. Your brain will thank you.

2. It will open a whole new world of entertainment options:

Sure, you can watch movies with subtitles and you can just enjoy foreign music without paying attention to the lyrics. But the truth is, you are missing out! There’s a lot of nuance in TV shows and movies that subtitles cannot deliver properly. Imagine being able to understand pop culture jokes, idiomatic expressions, cultural references and how much it will enrich your life. Not to mention that it will also take your appreciation for Netflix to a whole new level.

3. It will help you land a new job or get a promotion:

How many times have you seen the phrase “Bilingual in English/Spanish is a plus”? Even though being bilingual in Spanish is not always a job requirement, unless essential for the job, being able to add Spanish proficiency to your resume can get you ahead of others and help you land a new job. Similarly, if you already have a job, learning  Spanish can help you get that promotion you have been hoping for.

4. It will prepare you for the future:

Spanish is spoken in over 20 countries and territories as an official language. In the US only, where Spanish is not an official language, a whooping 52 million people – 23% of the population – speaks Spanish and that number is only expected to grow. It is projected that by 2050 the US will have more Spanish speakers than Spain. So why not prepare for the future by learning the third most used language on the Internet?

5. It will boost your confidence:

This one applies to language learning in general, but the fact that you will be able to communicate with so many people around the world, as seen above, can only give a great sense of achievement. That first time you can hold a conversation with a native speaker, the first time you can get around in a foreign country by using your target language, the first time you can be funny in another language are all satisfying milestones in your journey that will make you feel oh so proud of yourself.

6. will be a gateway to learning similar languages:

Learning Spanish could be to your advantage if you are planning to set out on a journey to becoming a polyglot! “Spanish functions as a gateway to the rapid acquisition of the cognate languages of French, Italian, and/or Portuguese” according to Clorinda Donato in her article Polyglots, Multilinguals, and Translanguagers: Spanish as a Gateway Language. Spanish shares its structure with other romance languages which will speed up your learning process and get you speaking in more languages in half the time. Talk about a shortcut!

7. It will make you more interesting:

From excelling at small talk at parties to impressing your friends, the ability to speak Spanish will make you more interesting to those around you (that is, more interesting that you already are, of course). Picture being introduced to a Spanish speaker at a social event and striking a casual conversation with them or having the ability to translate for a friend while you’re watching a movie or listening to a song in Spanish. It doesn’t get cooler than that.

8. It will open up opportunities for volunteering:

From teaching ESL in Spanish speaking countries to battling social issues, knowing Spanish will allow you to give back and help others. It’s a real win win situation. An experience that can change your life and make a difference in a world.

9. It will give you a better understanding of your own language:

As you learn Spanish grammar and vocabulary, you will come across foreign terms that may confuse you at first, only to realize that the same is true for your native language. An example of this is the subjunctive mood. Most English speakers think this doesn’t exist in their language. Except that it does! And if functions in a very similar way. Mind-blowing, I know.

Lastly, humor. Beyond the plus of understanding thousands of memes in Spanish, learning this language will introduce you to a new way of thinking and seeing the world. Spanish speakers are known for their lightheartedness and sense of humor, and being able to understand and be funny in your target language is an impressive skill to harness and a fun one!

So… which of these reasons resonates the most with you. Can you think of any other reasons why Spanish has changed your life? Let us know in the comments.