The ‘ukulele (pronounced “OO-koo-ley-ley,” and roughly translating to “jumping flea”) is one of the most popular instruments today, and many of you reading this have either signed up for private or group lessons with us here at TakeLessons, or are considering doing so. If you are, that’s great! Now, you may be wondering where the ‘ukulele came from.

If you’re wondering about the origins of the instrument, and how it came to be associated with the Hawai’ian Islands, then you’re in the right place. ‘Ukulele history is as deceptively complex as the instrument itself. This article briefly details its journey from obscure folk instrument to its integration with mainstream American music.

The ‘ukulele was the favorite instrument of the one of the last monarchs of Hawai’i, King David Kalākaua (1836-1891). Kalākaua was a patron of the arts. A strong proponent of Hawai’ian culture and traditions, he revived traditional hula and chant. Kalākaua (“KAH-lah-ka-OOwah”) was the first inductee of the Ukulele Hall of Fame Museum (UHoFM) in 1997. He even had his own band, known as Kalākaua’s Singing Boys, “the best singers and performers on the ‘ukulele and guitar in the whole islands,” as described by author Isobel Osbourne Strong.

His group popularized the ‘ukulele as a Hawai’ian instrument symbolizing a love of land and Hawai’ian sovereignty as the Kingdom faced a period of turmoil, leading to its annexation by the United States in 1898.

19th Century: Arrival in the Pacific 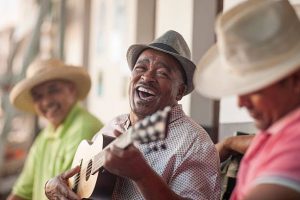 The ‘ukulele first arrived in the Kingdom of Hawai’i with immigrants from the Portuguese island of Madeira in August of 1879, who came to work on the sugar plantations. It wasn’t the ‘ukulele yet, however. Instead, it was a slightly different instrument known as the machete, a relative of the cavaquinho, considered a very small guitar. It even shared the same tuning with the top four strings of the guitar, although it was an octave higher, and higher than the modern ‘ukulele’s tuning.

Augusto Dias (UHoFM in 2003), Manoel Nunes (UHoFM in 1998), José do Espirito Santo (UHoFM in 2003), João Fernandes, and João Luiz Correa (all Portuguese) are credited as the musicians who introduced the King to this instrument, performing at events he hosted. Dias, Nunes, and Santo in particular are credited with shaping the Madeiran machete into what we now know as the ‘ukulele. This group performed for Kalākaua at ‘Iolani Palace (“EE-oh-la-ni”), which led to the King’s infatuation with the instrument.

Dias opened an ‘ukulele shop in Honolulu to manufacture the new instrument using native Koa wood. Dias is the first luthier (builder of string instruments) documented in Honolulu; Manoel Nunes is the second. The King was a frequent visitor to Dias’ shop, with his daughter Christina serving as a translator between the King’s English and the luthier’s Portuguese. Dias passed away in 1915, just days before the Panama-Pacific International Exhibition.

The completion of the Panama Canal in 1915 was celebrated in San Francisco with an exhibition that included Hawai’ian musicians and dancers. This is the event that is credited with kicking off a national craze for Hawai’ian culture, carrying the ‘ukulele to new heights and establishing it in the minds of many Americans as the instrument of Hawai’i. The ‘ukulele gained more popularity after World War II, boosted by Arthur Godfrey’s appearances on television in the 1950s and his endorsement of the inexpensive Mastro Plastics brand:

Inducted into the UHoFM in 2001, many credit Godfrey with the creation of a new kind of ‘ukulele: the baritone.

Baritone ‘ukuleles share the same tuning as the top four strings of a guitar, unlike the machete, which is an octave higher. His model was built by banjo player Eddie Connors. Others claim John Favilla in New York City created the first model, at the request of his son who wanted to use it to teach guitar.

Another notable television performance was that of Tiny Tim’s “Tiptoe Through the Tulips” on February 5, 1968, for the first episode of Rowan and Martin’s Laugh-In. Following this performance, “Tiptoe” became Tiny Tim’s signature song, and he became associated with the soprano ‘ukulele.

This instrument rides the waves of popularity, but its staying power cannot be understated. It is seen as a simple and laid-back instrument, but the limits of the ukulele are constantly being tested by the world’s greatest players. Jake Shimabukuro is one of these players.

Shimabukuro is the subject of a popular video uploaded to YouTube in 2006 (without his knowledge). In it, he performs an entirely instrumental arrangement of The Beatles’ “While My Guitar Gently Weeps” on a tenor ‘ukulele. This led to his breakout success as a virtuoso on the ‘ukulele, with the video quickly going viral. Another instance of his prowess on the ‘ukulele is his arrangement and performance of Queen’s “Bohemian Rhapsody” during a TED Talk in 2010.

Other players have found success on the ‘ukulele, too. The impact of Israel Kamakawiwo’ole (“KAmaka-veevo-olay”), also known as IZ, cannot be overlooked. One of Hawai’i’s most well-known stars years after his passing, IZ’s gentle medley of “Over the Rainbow/What a Wonderful World” (released in 1990) was a hit, debuting at No. 1 on the Billboard World Albums Chart. IZ was honored with a signature tenor ‘ukulele from Martin & Co.

Another wave of popularity has been kicked off by singer-songwriter Billie Eilish’s solo performances on a soprano ‘ukulele; she has her own signature model with Fender.

As you have read, the history of the ‘ukulele has a colorful beginning, and the instrument has earned its place among the most popular musical instruments due to its universal appeal. Both simple and complex, it is a contradiction of sorts. It is hard to imagine not falling in love with the ‘ukulele after hearing it for the first time. From the late 19th century until today, it has only grown in popularity and sophistication, and will continue to do so. Perhaps you will take this instrument to new heights! No pressure, of course; that would be against ‘ukulele tradition.