The term “Fiddle Tune” is very broad, and can be defined several ways. It could be simply: a tune that is played on the fiddle.  It could also be defined more specifically as: a short piece of traditional music with a repetitive form of at least two parts. This article will answer the question, “what are fiddle tunes?” We’ll talk about what fiddle tunes are, where they’re found, and other important information about how to learn and play them.

So, Just What Are Fiddle Tunes, Anyway?

In order to better understand the term, it’s important to have an idea of what both words, fiddle and tune, mean. Firstly, the fiddle is the same instrument as the violin, but the word fiddle is usually used when referring to traditional music. And next, a tune is a piece of music that is played instrumentally, as opposed to a song, which has lyrics. There are also pieces of music called “tune songs”, especially in the American old time tradition, which are tunes that have words, and can be played instrumentally or with a singer. 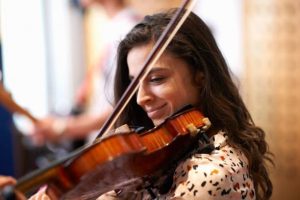 There are several traditions that use the term fiddle tune to describe the instrumental music in their style. These include Bluegrass and Old Time, which are traditional music styles from the United States, Irish, Scottish, English, French Canadian, and many, many more.

Each of these styles also has sub-genres that classify the music that was written in a specific time period or region. For example, within the Old Time tradition, tunes can be classified as “West Virginia tunes” if their author was from there, or “Civil War tunes” if they were written in that time period.

Written by Fiddlers, Meant for the Fiddle

Fiddle tunes are generally written by fiddlers, and meant to be played on the fiddle.  That being said, they can be – and often are – played on other instruments. In every tradition that has fiddle tunes, there is an ensemble that surrounds the fiddle, and depending on the genre, may take turns playing the melody as well.  There are also tunes written for other instruments, including banjo, guitar, and mandolin.  In the same way, these tunes are written for their respective instruments, but can be played on any.

Something that distinguishes fiddle tunes from other pieces of music is their relatively consistent structure. This can vary from tradition to tradition, but in general, fiddle tunes have two or three parts, which are each played twice, and then the entire tune is repeated multiple times. Each part of the tune is conveyed with a letter, so in a standard, two part tune, the structure would be expressed as AABB.  There are also many tunes that have three parts, although it’s less common.  Although rare, there are tunes that have 5, 6, or more parts.

There are a few common keys that fiddle tunes are in, which are usually the most comfortable keys to play in on the fiddle. The most common keys are G, D, A and C. The next most common keys after that are E, F, Bb and B. There are some tunes in these keys, but not many.  In the keys of F#, Eb, Db, and Ab, there are almost no tunes.

The setting in which fiddle tunes are usually learned and taught is quite unique compared to other types of music. Fiddle tunes are most often learned by ear, and almost never learned by sheet music. One reason for this is the flexibility it gives the player. Although fiddle tunes do have a “skeleton melody” which is relatively consistent, most players will play each tune slightly differently, and even change the melody each time they play the tune.

Sometimes tunes are taught in traditional music lesson settings, but more often they are passed from person to person at music festivals, jam sessions, and through families. In these settings, It’s really common to find people giving each other impromptu lessons where the teacher and student role are much more ambiguous, with the purpose being less about a certain educational track, but more about sharing knowledge for fun, and to keep a tradition alive.

Fiddle Tunes Tend to Be Regional 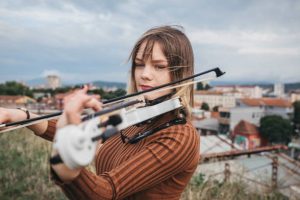 Fiddle music is very regional, in the sense of repertoire.  If someone went to a jam session in Maryland and learned all the tunes they play, they might know only a few at a similar jam session in Virginia. In the case of old time music, style is also very regional. The musicians in New England play a different style than in the south or the west, although it’s still all considered old time.  The reason for this is probably the history of the music.

Before the internet existed, or even means of long distance travel, people didn’t have access to many other musicians or their music.  So if someone was learning to play the fiddle, they could only learn from the other two or three fiddlers in their town, hence they developed a similar style.  Nowadays people have access to more resources and can pick and choose how they want to develop their style, but the regional styles have largely remained.