What is different between the violin and fiddle?  This question comes up a lot when I go out and play different gigs.  I might be sitting in on a folksy bluegrass session jamming away and someone might say “You don’t look like a fiddler, but you sure do sound like one!”

This is always pretty funny to hear, and I had to think about why they would make such a statement. I think part of it is just a pre-conceived notion that people have of what a fiddle player looks and plays like compared to a classical violinist.

If you show up at the bluegrass jam with a tuxedo on or a long black dress people would think, “that’s pretty odd,” even though you might play the style of music just fine. The same thing applies to going into a recital hall and trying to play a concerto in a comfortable pair of jeans.   People might think you are not taking things seriously enough. Unfortunately, in both situations the audience is paying attention to the wrong thing, which is how the person looks and dresses. 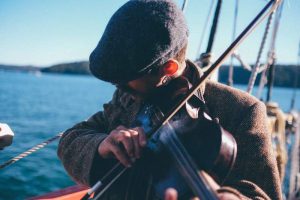 When it comes to the violin itself, people will fall into the same trap of trying to discern large differences in how an instrument looks so they can apply an appropriate label to it.

There are some minute differences between the setup of a violin for fiddling and the setup for classical playing. Fiddle players will play with louder strings that can cut through a band mix better when they are playing their breaks. A classical player might play with high-end strings that have subtle variations in the coloration of sound that are not necessarily noticed in a band setting.

Continuing with the bridge, there is this idea called the action of the string.  The lower the string is to the fingerboard the easier the ‘action’ is. Fiddlers will again lower the bridge to make the action easier.  Classical violinists would not do this generally so other techniques like left and pizzicato could still be done properly.

The idea of violin support is very important in the classical side of things. We learn that we must hold the violin at a certain angle, and it should be supported by the shoulder and jaw in a particular fashion.

In fact, one of the acid tests for if you are holding the instrument correctly is whether you can hold the instrument under your chin without the aid of your left hand.  There is a good reason for being able to do this.  It is so the left hand is left free to travel up and down through the positions easily.

On the other hand, the fiddle player will be much less concerned about being able to play up in 8th position way up on the body of the violin.  In general, they will restrict themselves to 3rd or lower position. In many cases even, just first position. Here, the ability to hold the violin solely by the jawbone and shoulder is almost never needed.  This is why the position of the violin looks so different from a fiddler and a classical violinist. The fiddler’s scroll may almost point to the ground, and the back of the violin can sometimes rest on the chest or upper arm in more extreme cases.

If you are one of these players, you have little need of a chinrest or shoulder rest.  This is why many times you will see these pieces of the violin missing on a fiddle setup.

The bow can sometimes be different as well.  There are many advanced bow techniques that require well balanced light springy bow with the proper amount of bow hair in place. However, many of these techniques are not needed for fiddle playing. So, it is possible to have a less expensive bow and be less picky about how it feels. It still needs to be well balanced, but many fiddle players will not play outside the middle of the bow. This is why you will see some players with a shorter than standard bow.  Shorter bows are lighter and easier to maneuver.  Fiddle players also enviably break their bow hairs with seeming abandon!

So, What is the Difference Between a Fiddle and a Violin? 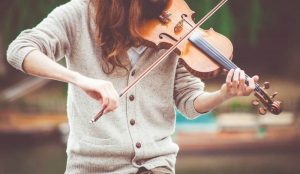 In the end, not too much.  Especially things that a non-violin player would notice. Keep in mind that the points I have made are based on my own observations in the industry, and are not hard and fast rules. There are many fiddle players that use shoulder rests. And classical players that cut their bridges a little flatter.

The main thing is to get playing, and enjoy whatever style of music you like.