The most valuable skill you can develop as a musician is learning to read music. While it’s possible to learn to play “by ear,” reading music opens up the world to you as an artist!

There are many different ways to write music. Guitarists often read off of charts outlining the chord progressions for the song. Drummers have a rhythm chart showing them what to play. As a violinist, however, you’ll most likely be reading off of violin sheet music.

Standard sheet music is filled with directions for the performer, including:

Sheet music will also often include items specific to the particular instrument. For example, violin sheet music may include numbers to signify position on the neck, bow direction markings, and specific markings for vibrato and pizzicato, techniques specific to the violin.

First, let’s look at the basic elements you’ll see on sheet music and then address some of the specific markings you’ll find on violin sheet music.

Music is written on a type of grid that consists of five lines and four spaces, called a staff. Each of these lines and spaces signifies a specific note or pitch.  Music is always read from left to right, and on the left hand side is a symbol called a clef.

The clef will clue you in on the names of the notes on that staff, as it’s different for bass and treble clef. The illustration above shows a grand staff that is used in piano music. The top staff shows a G, or treble clef. It’s called the G clef because it somewhat resembles the letter G and the bottom circle surrounds the second line, which is the note G in treble clef.

The bottom staff shows a bass, or F clef. It is known as an F clef not only because it resembles the letter F, but also because the two dots surround the second line from the top, which is the note F in the bass clef.

As a violinist, you will only be dealing with treble clef, so we will look specifically at the notes in that clef.

The time signature is a symbol that defines the number of beats per measure, and what type of note gets a beat.  Here are some examples:

The top number in the time signature signifies how many beats are in each measure. The bottom number shows what type of note receives a beat.  For example, in 4/4 time there are four beats per measure and a 1/4 (quarter) note gets one beat. 4/4 is also known as common time and may be represented by the letter “C”.

Now that we’ve explored the basics of the staff, let’s look at musical notation.

Because music has more than nine notes, ledger lines are used to extend the range of the staff. They can appear both above and below the lines of the staff.

Musical symbols are used to denote the duration, or how many beats to hold each note. The following chart shows the most common note durations in 4/4 time. 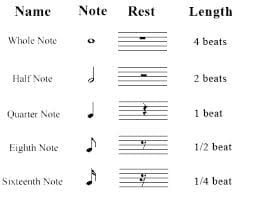 Once you master these basics, you’ll be able to read and play everything from Mozart to Metallica! There are other symbols that you will learn as you study reading music, including volume markings, articulation markings, and tempo markings. But understanding these basic concepts are the first steps to achieving mastery in reading music.

Because of the nature of the instrument, violinists will see some additional markings on violin sheet music that are specific to the instrument. Often, violin sheet music will include position markings. These signify when you move your hand up and down the neck of the violin to play different notes. They are usually shown as a Roman numeral beneath the note; for example, first position is I, second position is II, and so on.

Violin is an expressive instrument and often composers will incorporate this in their music. You may see the symbol “Vibr” under the notes of a section. This is shorthand for vibrato, which is a technique of moving your finger to get a pulsing sound when playing a note.

Because violin is played using a bow, there are specific symbols used in violin sheet music to signify if a note or series of notes should be played by bowing the instrument in an upward direction, or with a downward motion. Up-bows are marked using this symbol: >. A down-bow is shown as a partial rectangle open at the bottom.

Want to put your violin sheet music knowledge to the test? Take a look at some of these violin songs for beginners, and see if you can make sense of the sheet music!

The best way to learn how to read music, of course, is to study with a qualified violin teacher. While the basic concepts shown in this article can be learned independently, a teacher will help you refine and master the fine points of reading music. Learning to read music well will make your study much more rewarding and enjoyable.

4 thoughts on “Violin Notes: How to Read Sheet Music for Beginners”