You’ve likely heard the saying “Music is a universal language.” If that’s the case, then how should we be teaching it? How can you effectively learn the language? Read on as Aurora, CO teacher Zach S. explores the idea…

I recently was able to go to a master class taught by Victor Wooten, and he brought up something that is not talked about nearly as much as it should be in music. Music is a language. Now what does that mean? It means that music has rules (music theory) just as languages do (grammar), and that music can be used to communicate with others.

I will go more in depth into those two aspects of music as a language, but if you read one thing from this post, this should be it: You do not learn a language by studying grammar all day, you learn a language by talking and by listening. The same approach should be taken to music – learn to talk (play) but also learn how to listen.

Communicating with Music
I love music theory. I have studied it for seven years and it is my favorite class in college right now. With that being said, there are a lot of problems with the way music is being taught. When handed an instrument the first thing I am told to do is learn to play scales. Why? There is nothing musical about scales. I am not able to communicate with a scale, just as I am not able to communicate by saying the ABCs.

The first thing we teach a child when they are learning how to speak is a word, but in music the first thing we teach a student is a scale. Why not teach the student how to communicate? Why not teach them how to express themselves first and then teach them how it works second? What I do with students in their first lesson is have them play. I don’t care what, I don’t care how, I just want to see what they have to say. Then I play back, and by the end of our lesson we are able to communicate and my student has learned how to say something with his instrument. That is why they came to me in the first place, to learn how to talk with their instrument. Why not teach the student that first?

Learning How Communicating With Music Works
Now this is where music theory comes in. After a little bit of communicating with music, we start to learn why it works. Just as toddlers start to learn grammar in grade school. It is not the FIRST thing that is taught, but it is still taught. One can communicate without any knowledge of grammar, but the ideas one can get across are simple. As one learns more grammar they are able to get more and more complex ideas across to the listener.

This is why one should learn scales – not to be able to play through them at rapid fire, but to be able to use the scale to get a more complex idea across. Let’s take my main instrument, for example, which is bass guitar. I can hang out on the root of a chord and I will sound good. I then can add in some different rhythms to give it my own little flair. That is with one note, but if I learn the scale that goes with the chord, then six more notes open up. I am able to get a more complex idea across just because I have studied the grammar behind music. This is why music theory is important to allow musicians to better express themselves.

Conclusion
Music is a universal language. Everyone feels something from music, so that should be the first thing taught to students – how to communicate using your instrument, how to be in a band, and how to contribute to the sound. That should be the first thing taught by a teacher. Then it is the teacher’s responsibility to open up the vocabulary of the student, to allow the student to be able to say more, and say something complex. Music is taught backwards currently; we teach students the grammar and then hope they stay with it long enough to the point were they are allowed to say something. Let’s teach student how to say something first, then worry about the grammar behind music.

Thank you for reading! 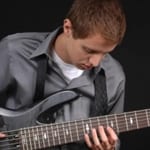