There’s no better way to learn Japanese than exploring important aspects of the culture. Martial arts play a significant role in both Japanese history and Japanese culture.

So whether you’re taking Japanese lessons or you’re interested in learning martial arts, here is your guide to the most popular Japanese fighting styles.

Sumo is Japan’s national sport. The rules are simple: each rikishi (wrestler) tries to push his opponent out of the elevated, clay dohyo (ring).

A sumo match ends when a wrestler steps out of the ring, or touches the ground with anything other than the soles of his feet. Matches usually take just a few seconds, but can last up to a minute or longer.

Unlike American wrestling, there are no weight classes in sumo, so a smaller wrestler could find himself face to face with a much larger opponent.

There are six annual 15-day sumo tournaments in Japan. Higher-ranked wrestlers will compete in one match per day during the tournament. At the end of each tournament, the wrestlers receive an updated ranking based on their record. The ranking system consists of six classifications: Makuuchi (top division), Juryo (2nd division), Makushita (third division), Sandanme (4th division), Jonidan (fifth division), and Jonokuchi (6th division). Yokozuna (grand champion) is the highest level a sumo can achieve.

Sumo has roots in the Shinto religion, and some of the original rituals remain today, like purifying the ring with salt. Sumo wrestlers must live and train in a heya (sumo training stable) and adhere to strict rules that dictate when they sleep, what they eat, and how they dress.

Judo is a modern martial art and Olympic sport created by Jigoro Kano in 1882. Judo translates to “the gentle way,” and the sport is a combination of jujitsu and wrestling.

Judo does not involve punching, kicking, or striking. Instead, participants use throws to take an opponent to the ground.
Kata (pre-arranged movement) is part of Judo and many other Japanese martial arts. Because the opponent knows the moves, kata also allows hitting, kicking, and the use of weapons, but these movements are not permitted in competition and free practice.

Karate translates literally to “open or empty hand” which is fitting since it was developed during a time when a ban was placed on weapons. The three basic movements in karate are thrusts, kicks, and arm strikes.

There are several theories about the history of karate, but many of them are difficult to verify. While karate was developed initially as a method of self-defense, participants also learn and practice Zen and Bushido principles in their search for spiritual enlightenment.

Karate is a blend of indigenous martial arts from the Ryukyu Islands (now Okinawa) and Chinese martial arts like, kenpo. A large number of karate styles are practiced in Japan and across the world, differing from one another in fighting technique and kata.

In kendo (the way of the sword), opponents use shinai (bamboo sowrds) and wear bogu (protective armor) that covers the face, chest, and arms. Participants must master techniques and timing to strike an opponent and score a point.

Like other Japanese martial arts, kendo is about much more than just the physical fighting. Kendo participants seek physical and mental strength along with spiritual enlightenment.

According to the Southern California Kendo Organization, “the concept of kendo is to discipline the human character through the application of the principles of the Katana (sword).”

Another form of Japanese sword fighting, iaido is the art of drawing and attacking with a sword. Unlike kendo, iaido is mainly practiced solo using a series of movements called waza. A participant uses techniques and movements against an imaginary opponent, and there is more focus on striking from the draw.

Iaido practitioners develop not only their technique and physical strength, but also their mental capacity. There is no direct sparring in iaido, but partner practice is permitted with a bokuto (wooden sword).

Hayashizaki Jinsuke Minamoto Shigenobu, who lived in Japan from 1546 to 1621, is credited with creating iaido. Almost 100 years prior, however, Iizasa Ienao developed iaijutsu, the precursor to iaido. 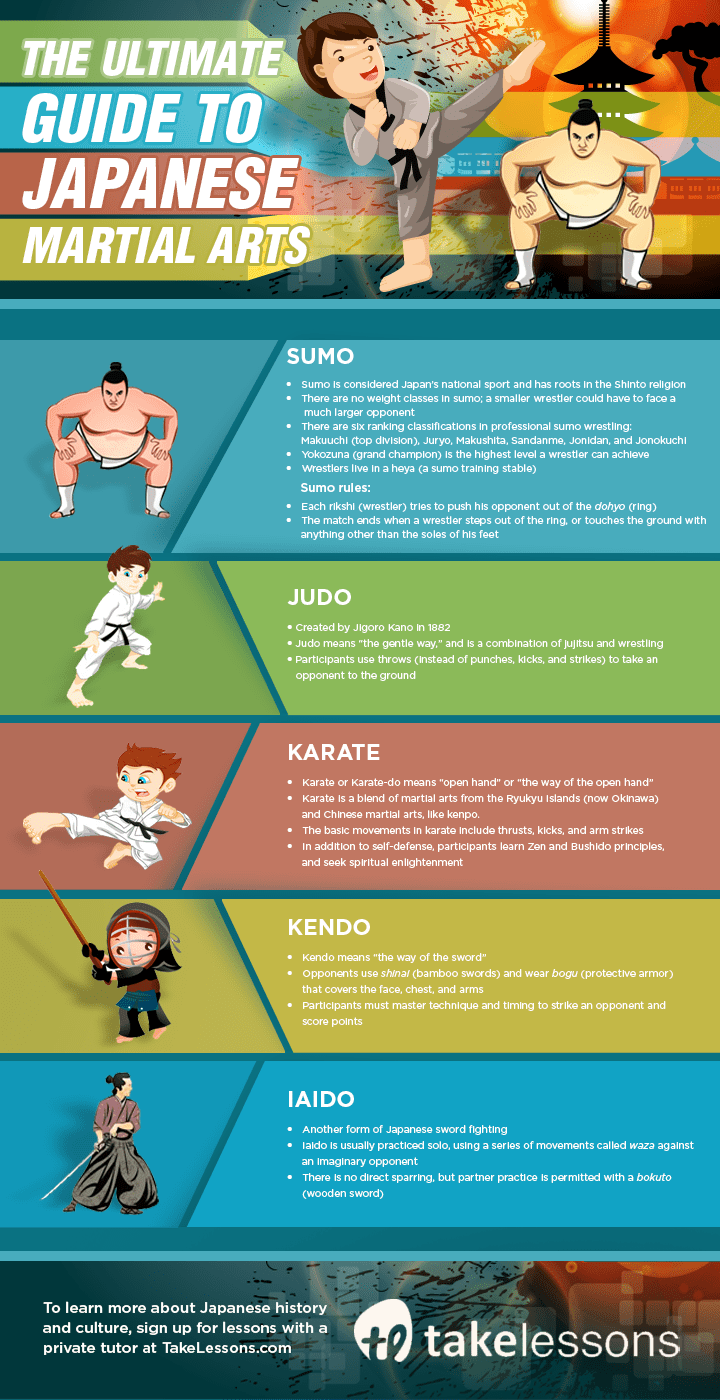 Japanese martial arts aren’t simply physical activities, but means of seeking spiritual enlightenment. Which martial arts form would you like to try? Let us know in the comments below!

One thought on “The Ultimate Guide to Japanese Martial Arts”