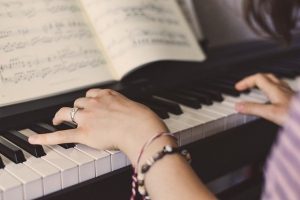 The piano was invented over 300 years ago. Since then there have been some insanely difficult pieces written for the instrument, particularly from the 19th century onward. The most common choice for “most difficult piece” is probably the third etude from Grandes études de Paganini, S. 141,  “La campanella,” written by Franz Liszt in 1851. The dexterity and accuracy required to play it seems, to most observers, to be almost otherworldly. A YouTuber named Rousseau made a video that showcases the piece very well using visual aids. I highly recommend watching it; it’s fascinating.

Watching a performance of a piece like “La campanella” could make any beginning piano student either inspired to go practice or give up the instrument entirely. How in the heck can anybody possibly get that good? Liszt, and the musician who wrote this, and composer Niccolò Paganini, who wrote the violin concerto on which this is based, were rumored to have sold their souls to the devil for their talents. But of course, the real answer is years of dedicated, focused practice.

There are a variety of technical exercises to practice which, over time, help a student develop into a more advanced player. One category of practice is finger dexterity – The ability to use each finger of each hand smoothly as you move up and down the piano keyboard. For this type of practice, I strongly recommend Hanon piano exercises. The Hanon exercises were first published in 1873 as part of a collection called The Virtuoso Pianist, and many piano teachers and players have been using them ever since.

Each exercise is designed to target very specific finger motions, each of which have their place in various piano literature. The more adept a student becomes at quickly and accurately completing these drills, the easier it will be to play the more advanced piano pieces.

There are a few other categories of practice that every beginner should spend time reviewing, but I will not spend too much time discussing each of them here, since I already wrote more about them in an earlier piece, “5 Piano Warm-Ups to Use for Daily Practice, Lessons, & Performances.” Instead, I would like to focus the rest of this article more on two styles of music to practice for a well-rounded, advanced skill set on the piano.

Reading new music at sight is an important skill for any musician. But there are a variety of musical styles out there. To play something by Chopin is a very different experience than to play something by J.S. Bach, and it often requires a different skill set. So to become a more advanced player, a student should look at as many styles as possible.

J.S Bach is well-known for two particular styles of musical composition: fugues, and chorales. A fugue is a compositional style where multiple musical lines are played one after the other, passing ideas back and forth. Imagine playing each of two to four different entrances of “Row, Row, Row Your Boat” at the same time, and you’re not too far off. Watch “Fugue in C major” from Four Little Fugues for a good example of what a fugue looks like on paper and sounds on the piano.

The chorale, on the other hand, is a style of music where you play mostly blocks of several notes all at once. There is one main melody, usually the top part, and the other fingers “harmonize” around it. “Nun lob’ mein Seel’, den Herren” is a good example of a chorale.

Fugues and chorales are common in the Baroque style of classical music in particular, but practicing them helps to develop critical skills for any advanced player regardless of style. One of the hardest hurdles to overcome as a player is the ability to mentally detach what one hand does relative to the other. Fugues help a student get used to that by reading multiple related, yet independent, musical lines simultaneously. Another skill to develop is the ability to read “block” chords quickly. That is, the ability to read a vertical stack of notes as a single unit. This is where chorales are helpful.

How Often Should I Practice?

More than what you’re doing now. There is a running joke with musicians that no matter what, we should be practicing instead of whatever else we are doing. Of course, life gets in the way and we all need to set our own realistic goals. But one’s rate of improvement is directly correlated to their practice time. Practice habits, like anything else, take time to develop. Start with a small but consistent routine – maybe 15 minutes a day, five days a week. Then grow that habit over time.

It is easy to sit down to practice and just fiddle around with random activities. It may be entertaining enough, but your rate of improvement will be slow. Plan to spend your time efficiently. If you only have 15 minutes, spend five on dexterity exercises, five working on a fugue, and five working on a chorale. The more you target your practice, the faster those particular skills will improve.

Advanced players spend years honing their skills. Something like “La Campanella” takes at least that long to perform well. But if you are passionate and dedicated enough, I think the beautiful music you can create is well worth the investment.