Are you wondering how to find the best piano warmups to get yourself prepped for piano lessons or recitals? Need some go-to exercises to get your fingers, hands, arms, and body limber and ready to play?

When you are trying to build habits, skills, or muscles, it is important to have a plan. Without a plan, one can often find themselves going over the same few things, or neglecting some kinds of practice for the kinds they think are more fun.

There is a common but important saying that goes around – “practice doesn’t make perfect, perfect practice makes perfect.” With that in mind, I would like to offer a short list of five piano warm-ups that I think are important for daily practice.

For some of these topics, I will be using some music theory terminology that might be unfamiliar to new students. To help, I’ve included relevant links for more information.

So, What Are Some Warmups for Daily Practice? 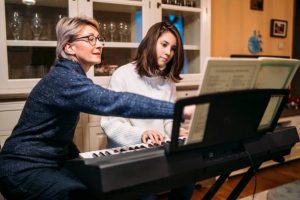 Scales (not just major ones)

Scales are a foundational element of musical organization. A scale, usually C-major, is often one of the very first things that a new piano student learns. This is not only because they are easy to visualize, but because they are ubiquitous in nearly all styles as a means of constructing musical works.

They are important to know how to play, but it is equally important to know how they sound, and how that particular organization of sounds carries over into other scales and musical compositions. When practicing scales, be sure to play them in ascend and descending order. Also, pay careful mind to where your fingers “crossover” during the scale. That is where mistakes most commonly occur, especially when using both hands.

Don’t forget minor scales! To neglect minor scales would be to neglect roughly one third of all of Western music’s foundational element. Finally, if jazz playing is one of your goals, then Blues scales should also be added to the list. Blues scales are essential tools for improvisation in the jazz style, so one should feel very comfortable navigating them. 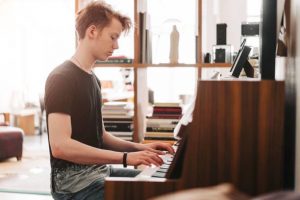 Any chord you play on the piano can be reconfigured by mixing up the order of the keys you are pressing. For example, a C-major chord uses the notes C, E, and G. You can stack the notes in that order, or you can order them as E – G – C, or G – C – E. This is called using “chord inversions,” or playing the chord in different “positions.” To practice this, you can move through chords in these different inversions up and down the length of the piano. You can play through each chord of a musical key, or if you want to be more comprehensive, every major and minor chord.

To move through a variety of common chord progressions in any key is an incredibly useful skill to have as a pianist. It improves your knowledge and ear for how most Western music is written, which makes learning new songs much easier, and it helps you to navigate around the piano more smoothly. In this area, a knowledge of scale degrees is very helpful. Chords are generally built within the context of a scale, using one of the notes of a scale as it’s foundation, or “root.” A strong knowledge of each chord within the context of each scale will greatly aid the accuracy of one’s music reading ability.

One of the most common kinds of chord progressions is the so-called “Circle of Fifths.” In the context of a particular scale, it takes you through each of the seven different chords available in an up-five, down-four pattern. Using Roman numerals to label the chords based on their scale degree, the pattern would be as follows: I – IV – VII – III – VI – II – V – I. This pattern, in part or in its entirely, is very common in classical, popular, and jazz musical styles. I would highly recommend becoming acquainted with it in multiple keys.

Building and maintaining dexterity in all the fingers of both hands is an essential part of any player’s practice routine. Dexterity exercises come in many different forms, each focusing on particular patterns. I like to use exercises developed by Charles Louis Hanon in The Virtuoso Pianist. Daily practice with exercises like these daily will build strength and speed in one’s hands quickly.

Finally, players should strive to find at least one fresh piece of music to play through. When I was auditioning to be a teaching fellow at the University of North Texas, I made a point to read through at least a few chorales (short 4-part church songs) by J.S. Bach every day. This greatly improved my ability to read multiple musical lines simultaneously, which is a necessity for any piano player.

The music you choose to sightread doesn’t have to be very long or very difficult, as long as it is unfamiliar. As with studying any new language, one of the best ways to develop comprehension is the read new material as much as possible. It will also help draw your attention to how each of the other exercises we’ve discussed can come into play in real music. This keeps the goals in view and prevents practice exercises from seeming too abstract.

Use These Piano Warmups Consistently to Maximize Your Playing Time

Get in the habit of using your piano warmups daily. Don’t just dive into playing your repertoire, but take time at the beginning of each practice session to get yourself in the zone – using piano warmups is the best way to do that.