Chess: Undoubtedly the ultimate head-to-head mental contest, an ancient game of strategy in which  your one and only goal is to outsmart and defeat your opponent’s army (represented of course by the pieces on the board). Chess moves that surprise your opponent are part and parcel of the game, and it would thus behoove you, the player and aspiring chess move master, to learn moves that will catch your opponent off guard and bring you victory. And so, without further ado, here are 5 moves to do that very thing—5 moves to surprise your opponent.

How to Win Chess in 5 Moves

Castling is one of the first “advanced” moves that the beginner chess player will learn, and it serves as a rough barometer to separate the novices from the knowledgeable (ie: the more gatekeeping chess enthusiasts won’t consider you to be a chessman until you know how to castle.)

Castling is the only move that allows two pieces to move simultaneously, and it is done like so: There must be no pieces between the king and the rook, and neither of those pieces can have moved prior to castling. When one wishes to castle, you move the two pieces towards each other and reverse positions. This can perhaps be better explained with images. 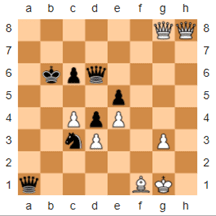 Kings and rooks move towards the indicated circles, touching each other, and then switch

Castling will suddenly create a defensive position for you, defending your king from an opponent who seeks to get an early checkmate using a queen or bishop. It can also be used to reorient your rook to get it into the fray. Bear in mind, of course, that you cannot castle yourself directly out of a check position (I personally think this rule should be changed, but that is beyond the scope of this article)

In contrast to castling, which is largely a defensive move, en passant is an offensive move that is typically part of the endgame—as indicated by how many chess problems involve en passant positions.

An en passant position is when a pawn moves two spaces on its first move, and ends up next to a pawn of the opposite color. That opposite color pawn, on its next move, can move diagonally behind the aforementioned pawn and capture it despite not being on the same square. The attacking pawn passes the other pawn, hence the name.

Again, an illustration is probably worth referring to. 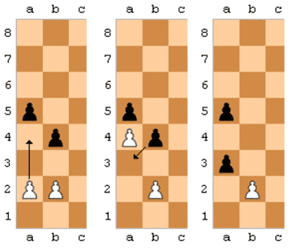 This is another move that the casual chess player doesn’t know, and can act as a great surprise  in the later stages of the game—the experienced chess player knows the importance of pawns, and bypassing them in this way can clear up the path to a checkmate, or perhaps a pawn promotion. And speaking of…

Simply put, this is when a pawn makes it all the way to the opposite end of the board, and has the opportunity to promote itself to any piece (other than a king). It goes without saying that suddenly having a queen appear at the end of the board is a devastating surprise to your opponent, and oftentimes can spell the end of the game—or at the very least, put the king in check, taking pressure off your side of the board! 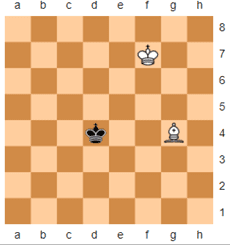 As with many chess tactics, a discovered attack forces the opponent into a situation in which they are being threatened in two places at once, and thus have to pick the “lesser evil” to sacrifice to the opponent. Discovered attacks can also combine many of the previous moves we have learned, as in this example that uses an en passant check to put the king in danger from a bishop and a rook. 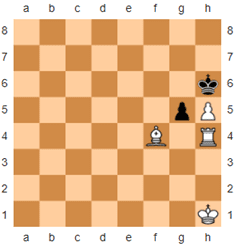 As you can see here, moving the white pawn to G6 in an en passant move means that the king is in a double discovered check from the white rook and the white bishop.

If you the reader, are on the ropes from your opponent’s attack, you can, if all else fails, utilize a dead position to force a stalemate on your opponent. This is a situation defined as any position where neither player can win the game with a legal move. This can be done in many ways, an example of which is below 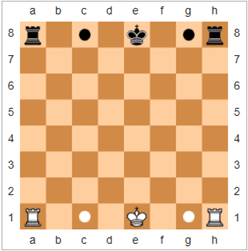 These situations force a draw (Stalemate). And while nobody is truly satisfied with a tie, it’s better to tie than to lose, correct?

Practice These Chess Moves to Win in Your Next Game

Try pulling these moves out in your next chess game, and catch your opponent off guard. And always: have fun with your gaming.