If you are reading this then the idea that you would like to start performing ukulele alongside other musicians has crossed your mind. This can seem like a daunting task, even scary, if you aren’t armed with a list of things to start thinking about in order to achieve this goal.

There are a few steps to follow when learning a song for the first time (or polishing one you’ve been playing for awhile) in order to get it performance ready. There are also, once you’re ready to start performing on the uke with your fellow musicians, things that would be helpful to know in order to succeed.

As someone who has jumped into the ring of a jam session many times, I’m here to help you with that. I promise that with these new guidelines in mind, the idea of performing on uke with others will seem simpler than you had thought previously.

1) where the pulse of the song is

2) what chord is supposed to be played at this time.

Beyond that, everything else is style and flair. Let me elaborate.

Feeling the Rhythm of the Song 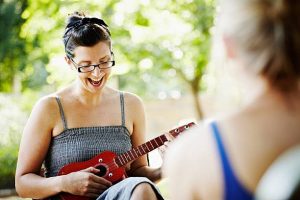 To know where the pulse of a song is at any given time you first need to be able to play at a consistent “beats per minute” or “BPM” for short. This is the way that musicians say how fast or slow a piece of music is.

A slow song would be somewhere around 60 bpm, a fast one would be around 170 bpm. But you want to ensure that you can play consistently at any bpm, and that can be done by beginning to practice with a metronome. A metronome is a device that keeps time for you, and allows you to focus on staying in time without having to guess whether or not you’re doing that on your own.

There are many free metronome apps for all smart devices and I would highly recommend. If you haven’t gotten one yet, go do that right now. Practicing with a metronome regularly will make it so you will be able to keep time without effort when you are performing on your uke.

And once you have this ingrained sense of time while performing you’ll also need to know when chords change, and for how long to play them. This can be done by sitting down with your favorite song and listening critically to the sound of the chords being played.

Are you able to pick apart when a chord is played, and when it changes sound? This is a great ear training exercise, and after doing this consistently for a while, it will get easier and easier.

If you’re unable to do that yet and you’d like to get performing on uke right away, I recommend finding a “lead sheet” to the song you are looking for. Lead sheets will usually tell you how long to play a chord at any given time before switching to the next one. And typically in songs, this will be done at a regular and even pulse.

For instance, in the song Let It Be by The Beatles, each chord is played for two beats before switching to the next:

Armed with that knowledge, you can either count two beats in your head before moving on, or start to hone your ear so that you can hear when two beats have passed without the numbers being counted in your head.

Honing Your Style and Flair

So again, beyond that, everything is style and flair. You only need to be able to feel the beat, play along with it, and switch chords at the appropriate time in order to start performing on uke. Everything else like what strum patterns to use, whether to play notes loudly or softly, or some other thing related to the genre you are playing will be added in later as you progress. There is no reason to wait for these things before trying to play with other people!

And once you start playing with other people, there are some shorthand symbols and lingo that is used in order to signal to people where to go within the form of a song.

The form of the song generally refers to the order in which you play the different parts; such as the verse, the chorus, solos, or the bridge. And if you didn’t know any better, you would think the person leading the jam is having some sort of problem instead of telling you something about where the song is going next.

When someone pats the top of their head, this means that you would play the beginning of the song. This can be done at the beginning or the end of a tune, it just simply means go back to the beginning after this “section” ends, whether that be verse, chorus, bridge, etc.

When someone raises their fist, that means that after this section you will be ending the song, so end on one last big strum of the main chord. If someone points to you as a section is ending, get ready! This symbol means that it’s your time to take a solo.

Use These Skills to Get Ready to Perform on the Uke

Armed with these tools you should be more than ready to hone your skills to start performing on the uke with others. Whether that’s joining a band, joining up with a local jam session in your area, or taking a group ukulele class; know that if you follow these steps, you will succeed at playing along.