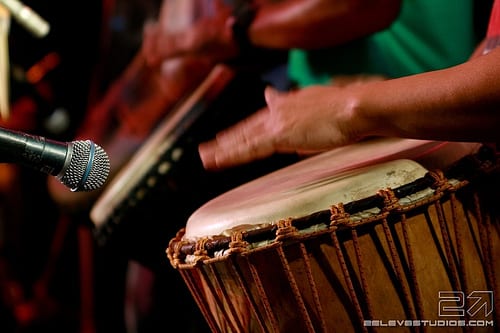 Give a kid a set of pots and pans, and what do they usually do? The natural instinct is to create different sounds, using hands, sticks or perhaps a spatula. Even if it sounds messy at first, great musicians are able to harness this idea of creating music from unconventional sources. Read on as Marietta, GA teacher Paul S. explains…

Glenn Kotche, the drummer for the band Wilco, is a strong advocate of what he calls “sound possibilities”: a dump truck at a construction site, for instance, or acoustic sounds such as metal fruit bowls and strange cymbals. Whether recorded with a microphone or produced acoustically, Kotche keeps his ears open to the sounds of the world around us. For a great example of his thoughts, check out this YouTube clip: http://www.youtube.com/watch?v=F3iGfkxy5KM

But even if you’re not a member of an internationally touring band doesn’t mean that you can’t take advantage of found sounds. I find that some of my favorite percussion instruments are those that I have stumbled upon by accident or created myself; a do-it-yourself attitude is all that is required! For example, I was in a Michael’s Craft Store a few years ago when I heard a box of steel sleigh bells calling my name. After spending a mere five bucks, I had new sounds with which to experiment. Since we percussionists don’t always need to be louder than an orchestra (“Sleigh Ride,” anyone?), I wanted to make a set of sleigh bells that were less resonant than the “traditional” sound. So I dug a hole and buried the bells underground for a few months. After I retrieved them, the dirt, moisture and oxidation had given the bells a sound unlike any I’d heard before. The rust had changed the steel and the bells now have a much drier jingle. From there, it was simple to mount them on a stick and use them in a live or recorded setting.

But why look further than your home? Never underestimate the power of pots and pans. Children have no reservations when banging on cookware with wooden spoons; don’t hesitate to experiment with your kitchen’s sounds. Just let your ears serve as your guide. I find that cast iron pot tops make incredible, long-sustaining bell sounds, similar to the bells of ride cymbals. Steel or copper bowls will sometimes produce beautiful sounds rich in overtones. It is possible to mount these objects on a regular cymbal stand using only a drill and a thick bit, but raiding your kitchen isn’t necessary. Go to a thrift store! Bring a pair of sticks with you and disregard the strange looks you receive. Once you’ve got some interesting sounds, try playing the objects with different implements. Drum sticks are great, but they’re not the only option. Why not use a whisk? Perhaps you could put a thick layer of tape on the butt end of your drumstick, or cut a super-ball in half and glue it to a thin wooden dowel. The possibilities are as infinite as your creativity. I encourage you to be curious as a drummer! Who knows what great sounds you will find if you listen closely?

You might also like…
– Do I Have to Learn Paradiddles? Exercises for Drummers
– Should Drummers Learn Music Theory?
– Booked the Gig? Here’s How to Prepare

Paul S. teaches drum, piano, music theory and percussion lessons to students of all ages in Marietta, GA. Paul’s specialties include classical, jazz and popular music styles. He joined the TakeLessons team in October 2012, with a Bachelor’s degree in Music Performance. Find out more about Paul, or search for a teacher near you!