Learning any new language can seem difficult at first. If you’re feeling apprehensive about learning Japanese, these tips from language tutor Carol Beth L. can help.

Is Japanese hard to learn? Many people say so. I believe the answer can be yes or no—or both—depending on the individual. Japanese is often said to be a logical language that does not have anywhere near the whimsical inconsistencies or notorious exceptions of languages like English or French.

English, in fact, can be very difficult for some foreigners to learn. This is a result of the inconsistencies stemming from its numerous linguistic influences from historic groups that inhabited, invaded, or came in contact with England, such as Anglo-Saxon, Welsh, Scottish, and French. For most people reading this article, however, English is probably not difficult. In fact, it’s likely to be your first language. If it’s not, you have most likely mastered it to a reasonable level. Japanese can be mastered to the same degree English can, given reasonable time and effort. So why do people say that Japanese is so hard then? Here are a few often-cited reasons:

Japanese is often considered to be one of the most different languages linguistically from English. As a result, it takes more time for English speakers to learn Japanese. Our way of thinking has been shaped by our native English language, and we must teach it to conform to a different way of organizing our thoughts.

The Japanese writing system borrows a lot from Chinese, but the characters (kanji) are not always used the same way. As English speakers, we are used to phonetic—not pictographic—language. Japanese has two syllabaries, or sets of written symbols,  hiragana for native words, and katakana for foreign words. These syllabries provide ways to write without knowing all the characters for what you are writing. The pictographic kanji and the phonetic hiragana and katakana are regularly used side by side in writing. Using more kanji, however, will help you look more educated.

In Japanese, the verb is always placed at the end of the sentence. For an English speaker who is accustomed to putting the verb right after the subject, it can take time to reorganize the parts of the sentence in his mind so that everything comes out in the right order. Japanese grammar is, nonetheless, very logical. In this respect, it’s not really so difficult as it is different. Differences usually mean added learning time for students. The same is true for most non-Japanese speakers, too, because Japanese is related to very few other languages. French, Spanish, Italian, and Portuguese speakers can learn other languages in this group very easily because all are Romance languages stemming from common Latin origins. French also strongly influenced English after the Norman Conquest of the 11th century, making all of these languages easier for English speakers, too. The only widely-recognized language thought to have common roots with Japanese is Korean.

Phonetics are not actually as difficult as people sometimes make them out to be. The R sound—really between an R and an L—is one of the most difficult for an English speaker to get exactly right, though probably not as difficult as it is for a Japanese speaker to distinguish between the English R and L. The long vowels can also take some time. For example, kawai and kawai’i have two very distinct meanings: scary and cute respectively. Not words you’d want to mix up! Yet the only phonetic difference is the long “ee” sound in kawai’i to contrast with the short “ee” in “kawai.” Note that “long” and “short” are not used in the same sense we use them with our English vowels. A long vowel in Japanese really takes more time to say; it isn’t a reference to a phonetic difference. Most Japanese syllables are quite simple: one consonant sound plus one vowel sound. Chinese pronunciation with its tones and unique sounds (zhi, chi, shi, and ri) is probably more difficult for most English speakers.

So is Japanese hard to learn? Yes and no. It will require time and willingness to think differently, but learning Japanese can be fun, and the language is logical and consistent. If you’re willing to commit your mind and your time, then you can master it. 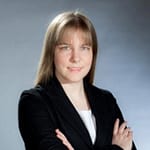 Carol Beth L. teaches French lessons in San Francisco, CA. She  also studied Japanese in high school and college.  She has her Masters in French language education from the Sorbonne University in Paris and has been teaching since 2009. Learn more about Carol Beth here!