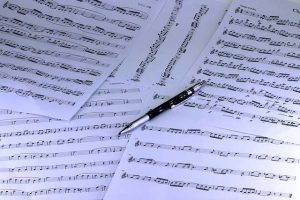 Students often ask about the difference between major and minor. These terms have two applications in music theory. One use relates to chords (harmony). A second use relates to scales (modes). Both are related.

To understand these concepts deeper, you have to first understand intervals. An interval is the space between two notes. Intervals help to define the  relationship and interaction between notes. This also includes the formation of chords.

The smallest interval in music is a half step. Half steps on the piano are keys  located next to one another. Most of the time, this will mean moving from a  white key to a black key (or vice versa). However, half steps also occur  between “B” and “C” and “E” and “F” on the white keys.

Major and minor chords are defined by a third interval between  the root (bottom or lowest pitch of a chord) and another higher pitch. But if you don’t know how to find the third, or if you often confuse a major third  with a minor third, you can count half steps as a failsafe.

Here’s how you would count half steps to find major and minor thirds:

Let’s look at some examples. First, let’s find a major third using “C” as our root. If we follow the rules spelled out above, we need to find 4 consecutive half steps.

In this example, they are as such:

For a minor third, we would count only 3 half steps:

The correct enharmonic spelling of note names plays a role in how we count  steps too. For example, flats are used in the minor third example above  because we must land on a third interval.

Usually, major and minor chords also contain a perfect fifth interval between  the root and the fifth. This makes the chord a triad. However, the fifth is  optional, and it does not define the chord. If you add the perfect fifth but take  away the third, major and minor triads will sound identical. The fifth merely  adds density to the chord. Note: This does not apply to diminished or  augmented triads, which include altered fifths.

Major or Minor – it’s One or the Other!

Major and Minor make up the two sides of the proverbial coin when it comes  to defining the key of a song or composition. Songs are either in a major key or a minor key. Sometimes more complex songs or pieces contain modulations (key changes), and we may see both major and minor keys  represented in a single work. However, major and minor keys (and their  correlating modes) cannot occur at the same time, at least in tonal  music. Each piece, or section of a piece, must be either major OR minor.  They cannot be both.

Sometimes people say that major is “sunny” or “happy,” while minor is  “dreary” or “sad.” There is some truth to this. However, there are plenty of  examples that belie this too. For example, REM’s “Everybody Hurts” is a “sad” song, yet its key is D major. Adele’s heart-rending “Someone Like You” is also major.

Conversely, the upbeat “My Favorite Things” from The Sound of Music is in  E minor. Similarly, Peggy Lee’s passionate “Fever” is also, perhaps  surprisingly, minor. There are many other examples of songs that don’t fall  into the “major is happy” or “minor is sad” categories.

Songs and Scales – They are Related

Major and minor-keyed songs are based on their corresponding scales (modes). This informs both the content of the melody and the harmony of a piece.

Further, major and minor chord progressions usually follow the primary  cadences (harmonic touchstones) of the mode they are derived from. Major keyed pieces almost always end on a major “home base” chord too. This  chord is usually called a “I,” using Roman numerals.

The reverse is true with minor-keyed songs. Occasionally, however, minor keyed classical pieces surprise the listener by suddenly ending with a major  third in the “home base” or “I” chord. This unexpected switcheroo gives the  music a sudden lift. The classical term for this is picardy third.