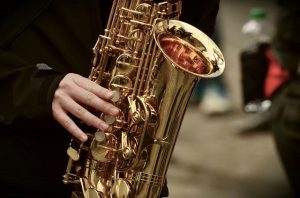 As a vocal coach, I often need to accompany my students on the piano as they practice their music. Without adequate time to practice or the necessary skills as an accompanist, this usually means that I have to fake my way through new music to the best of my ability. Fortunately, I can fairly successfully “fake it” on the piano with many pieces. This is because I know how to quickly read lead-sheet symbols, which are commonly provided with popular sheet music.

Lead-sheet symbols, or chord symbols, allow performers to understand and perform the basic structure of a song without the finer details that normal notated music provides. If all you have (or all you can afford to pay attention to at the time) is a single tune, lead-sheet symbols let you know how to support that melody in a way that makes sense musically. They let guitarists know how to play along, give jazz soloists a foundation to improvise, or let a piano player fake their way through a piece. So for this article, I want to review three basic elements of how to read them.

The most basic chord symbols tell you two things: which note a chord is built on, and what kind of chord it is supposed to be. Consider the sheet music for the opening of “Dance Monkey” as sung by Tones and I (retrieved this and my other examples from sheetmusic-free.com).

The first chord symbol has an F with a “sharp” sign and a lower case “m.” The F and the sharp sign should be read together, meaning that it is asking you to play an F-sharp chord. The lower-case “m” means that the chord quality is “minor.” So all together, the chord symbol shows the performer that they should be playing an F-sharp minor chord, or the notes F-sharp, A, and C-sharp. If you are unfamiliar with the concept of chord qualities, there are sites like openmusictheory.com that can help, or you can sign up for music theory tutoring with me.

The next chord symbol is simply the letter D. If all you see is a single letter like this, that means that the performer is supposed to play a major chord that is built on that letter. So for this example, the symbol means to play a D-major chord, or the notes D, F-sharp, and A. The third symbol in this song is another single letter, E. So for that next part the performer plays an E-major chord. The fourth example has a C-sharp and a lower-case “m,” so this chord should be another minor chord, using the notes C-sharp, E, and G-sharp.

Some lead-sheet symbols have a letter followed by a backslash and another letter. These symbols are commonly-referred to as “slash chords.” You can see an example of a slash chord in the second measure of the next example, “Say You Won’t Let Go” as sung by James Arthur.

Slash chords give you one extra important piece of information about the chord you should be playing – If you see a slash chord, the first letter tells you what kind of chord to play and the letter after the slash needs to be played below the chord. Composers use slash chords when they want to make sure that the bass line, the lowest sounds, move in a particular way. For piano players, it often means playing that note in the left hand, and the rest of the chord in the right hand. In this example, that means playing an A in the left hand and an F-major chord in the right hand.

Some chord symbols also have numbers next to them. These numbers tell the performer to add extra sounds to the chords they are playing. I point out examples of these in the last example, the opening of “My Future” by Billie Eilish.

Let us look at the second chord symbol (in the third measure) first. It reads “E-flat, 7.” The added 7 means that you play a normal E-flat major chord and add what is called the “minor seventh” or “dominant seventh.” Breaking down the different kinds of “seventh-chords” could probably be its own separate blog article, so instead, let us just say that the dominant seventh has a very particular kind of sound.

It can be found on the piano by starting at the letter name that a chord is based on, and then moving down two piano keys (white and black). Finally, play that same key up one octave, and you will arrive at the dominant seventh. In this example, we would start on E-flat, and then move down on the keyboard past D to D-flat. Move the D-flat up an octave, and you will have a distance of a minor seventh, aka dominant seventh away from the starting E-flat.

The dominant seventh is the default setting for sevenths in a lot of music, that is why a single 7 in the chord symbol is all you need to show it. If you want to have another kind of seventh added to a chord, then the chord symbol needs a qualifier. Look back at the first measure of “My Future.” That chord symbol reads “E-flat, major-7.”

The “major seventh” is a different sound than the “dominant seventh” because it covers a larger musical space. To find it, use the same process as before except you only move one piano key away from the start. In this example, it is an E-flat to D relationship instead of E-flat to D-flat in the case of the dominant seventh.

There is more to learn when it comes to reading lead-sheet symbols, but these three topics are enough to get anyone started, and covers most of what you might see, particularly in popular music. Reading chord symbols requires practice to get used to it, just like anything else, so try out sources like sheetmusic-free.com for all kinds of free practice material. Before you know it, you will be able to get through the basics of many songs without being able to fluently read regular music.