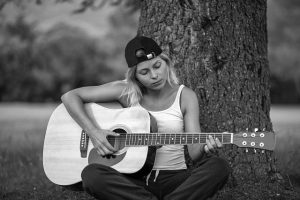 Full honesty here, I read my topic for this week and I whisper-screamed “YES!!” in my little home office. As a female singer/songwriter, I have found inspiration from many a woman, from many a genre, known, and unknown. So, sit back, relax, and enjoy my favorite article to date.

Let’s start with the queen herself, Dolly Parton.

She has written more than her fair share of hits, including ones you probably had no idea that were her creations. (Hannah Montana theme song? Yep. Dolly!)  If you’ve ever had the pleasure of seeing her in person, you’ll recall she plays more than just guitar. In fact, she plays 20, including dulcimer, pan flute, saxophone, electric and acoustic guitar, banjo, and fiddle to name a few.

Her entire life’s story is fascinating and inspiring which is why her songs can be described in the same way. She took from her humble beginnings in Sevierville, TN and wrote songs in her signature story-telling style. Turning simple everyday objects like a coat into a heartbreaking symbol of a mother’s love, and the mundane office job into a catchy hit turned movie, turned broadway musical.

Probably the most famous of all is a song she didn’t make famous but, she’s still reaping all the benefits of: “I Will Always Love You.” While she originally recorded and released the song herself, it was eventually made famous by the late Whitney Houston (who was a fantastic songwriter in her own right!)  in the movie The Bodyguard.

One of the things that has made Dolly not only one of the greatest songwriters of all time but one of the smartest business minds in the music industry is she’s never sold the rights to her songs. Meaning, she’s negotiated contracts to where she retains all of the writer’s shares and publishing shares and people pay her to re-record the song. Simply put, anytime “I Will Always Love You” or any of her songs are played anywhere, Dolly gets a check in the mail. Brilliant. To read more about her life, you can read this article from bbc.com.

Someone you may not know, but you should if you don’t: Brandi Carlile

If you are unfamiliar with the Americana genre, you may not know this name however, Brandi Carlile has been an artist since 2004. Her breakthrough song, The Story in 2008, paints a picture of a life lived, scars earned, adventures had, just to get to that one person who completes you in an emotionally compelling folk/rock ballad. It’s done with simple, straight forward lyrics, powerhouse vocals complete with perfect imperfections.

Her style hasn’t changed much since then, simply gotten better and better, earning her multiple Grammys and awards. The aim of folk and Americana songwriting is to paint a picture of everyday situations in a way you never thought to describe it. For example, in The Story, the first lines are: “All of these lines across my face / Tell you the story of who I am / So many stories of where I’ve been / And how I got to where I am”. She’s describing the wrinkles on her face. Plain and simple. Then, she goes on in the chorus: “Oh, but these stories don’t mean anything, When you’ve got no one to tell them to, it’s true, I was made for you.”

That pretty much explains itself but the way she sings it, keeping the melody simple and letting the words breathe pulls at your heartstrings, making you feel some kind of way towards the song itself. If you’re a folk, Americana, or even country artist, I would highly suggest tuning into Brandi Carlile.

An incredible R&B artist and guitar player, H.E.R. has reinvented herself to become one of the best R&B artists on the radio. As a multi-instrumentalist and smooth and powerhouse vocalist (did you see her Superbowl performance this year?) she has earned multiple awards, including Grammys for Best R&B album and Best R&B Performance, and in her early career, the respect of artists like Usher, Alicia Keys, and Rihanna.

When listening to a song, we, as listeners, enjoy rhymes and rhythms that line up because they fall into place and make sense in our heads. They’re satisfying to hear. H.E.R. has a knack for consistently rhyming her lines to create an infectious tune that makes us bob our heads along and want to hear more.

Her song “Damage” talks about a new relationship but warns the love interest that they could “do damage” if they don’t return her affections. Each verse follows a consistent AAAA rhyme scheme (meaning the end of each line contains the same rhyme) using near rhymes and consistent syllables. “If you got it, it ain’t no question No, it ain’t no room for guessin’, No more than emotionally invested (No, no), Showin’ you all my imperfections, oh”.

As a songwriter, it’s not the easiest skill to obtain, but H.E.R. has a knack for finding those near rhymes and making them work. Did I mention she’s only 23? We’ve only scratched the surface on what she can do! (Side Note: As I’ve been writing this article, I’ve been listening to H.E.R. and I can’t stop dancing!)

Brittney Spencer has just broken out in the Country music world with her song Compassion. She started as a background singer for artists such as Carrie Underwood and Christopher Cross while honing her songwriting, and then gained major traction as a songwriter with the release of her EP, Compassion. The single by the same name asks for just that, for people to have compassion for one another. The first verse says it all: “If a half-empty stomach makes you hangry, imagine life for people on the street, If a neighbor’s untamed yard can drive you crazy, Imagine seeing bombs break through their concrete, Image is something of importance, But only when you’ve got, anything to prove, Well, the world just don’t seem fair when all it’s left you, is little or nothing to lose.”

It continues on in the chorus beautifully by not criticizing people for living their lives, just simply asking to find compassion for others. Her style of writing musically, isn’t your typical country song. Her voice is soft without being quiet, her production isn’t flashy, the instrumentation is deliberate, and her lyrics are just clever (Listen to “Damn Right, You’re Wrong.) You can clearly hear her several influences including country music, and gospel. If you’re someone who likes to push genres out of their norm (I certainly do!), you should absolutely give Brittney Spencer a listen.

We have only tapped the surface…

…of female songwriters, because there are literally THOUSANDS out there for you to listen to. Next time you want to be inspired by a new songwriter, simply type in “female songwriters, *your choice of genre here* to google, and dive down that rabbit hole! Happy listening!