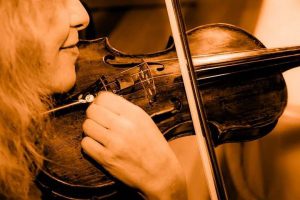 The violin is one of the most versatile instruments in the world, when it comes to all the different styles of music that can be played on it. One popular style of violin music is bluegrass violin, also commonly called bluegrass fiddle.

Bluegrass is a genre of traditional music from the United States, with roots in the Appalachian mountains. Going further back, the influences of bluegrass come directly from traditional Irish, English, and African music. The bluegrass style evolved from music made by those who arrived in the United States via colonization and the slave trade.

The violin has a very important role in the bluegrass ensemble, often leading instrumental fiddle tunes, or backing up a singer in vocal songs. In order to get a good idea of what bluegrass violin sounds like, here are some important albums to listen to:

Kenny Baker is a legendary first generation bluegrass fiddle player.  He contributed hundreds of fiddle tunes to the bluegrass repertoire.  He played in Bill Monroe’s band, “Bill Monroe and the Bluegrass Boys”, who are considered to have invented and popularized the genre.  This album features music written by Bill Monroe and Kenny Baker, and it’s great listening and learning material for aspiring fiddlers.

The Bluegrass Album Band is made up of the best of the second generation bluegrass musicians. The fiddle player on the album is Bobby Hicks. Unlike the above mentioned albums, this one is not solely focused on the fiddle, and rather just a very good and standard example of good bluegrass music.  This is a great album for listening to great fiddle backup, as well as solos.

Michael Cleaveland was considered a child prodigy, and is currently one of the most talented modern fiddlers on the scene.  He is known to play very fast and “flashy”, but also tastefully.  This album features him with his band, Flamekeeper.  It is great for listening to how fiddle and banjo interact, and for learning standard bluegrass violin tunes and songs.

Jason Carter- On The Move

Jason Carter is a modern fiddler who is influenced by many of the first and second generation bluegrass fiddlers, including Bobby Hicks, Kenny Baker, and others. He currently plays with the Del McCoury band, one of the most popular traditional bluegrass bands nowadays.  This is a solo album of his, featuring some covers and original tunes.

These are a variety of albums that represent a large part of the bluegrass violin sound, including fiddlers from different regions, generations, and backgrounds. Listening to all these albums, and others that feature the same musicians, will give a clear picture of what bluegrass music sounds like, and where the violin fits into the ensemble.

It’s a good idea to listen to this music with the purpose of figuring out what each instrument does, and why they do it.  This is a good way to gain a deeper understanding of the music and an analytical ear.

Where Did Bluegrass Violin Music Come From?

In order to learn more about the genre, it’s also important to know about the history.  Since bluegrass is a style of traditional American music, it is very heavily intertwined with the history of the United States.

The story starts when colonists from England and Ireland started to make their way to what is now the United States. These immigrants colonized the Appalachian mountains, and brought the instruments used in their traditional music, including fiddles, guitars, and accordions.

These immigrants began enslaving and bringing people to the United States from Africa. The enslaved people played an instrument that resembles the banjo.  They couldn’t bring their own instruments, but constructed similar ones with parts they found around the places they were living and working.  There were also immigrants from Italy who would have brought mandolins to their homes in the “New World”.  With all these musical traditions mixing together in the mountains, a new genre of music was formed that came to be called Old Time.

Bluegrass As We Know it Today

Over time, this music developed, and a young man named Bill Monroe mixed it with other styles, including blues and country. Bill eventually formed a band, called “Bill Monroe and the Bluegrass Boys”, which had lots of different fiddle players over the years, including Kenny Baker, Chubby Wise, Howdy Forrester, Art Wooten, and many more.  This was the start of Bluegrass music.

Bluegrass violin is a diverse style of violin, with a rich history which is always being updated and modernized.  In order to learn about it, it’s important to learn what it sounds like, analyze its role among the other instruments, and learn where it comes from. In order to learn how to play it, it takes years of practice, listening, building repertoire, and learning technique.  All the work is worth it though, because of the great community and opportunities surrounding the musical style.