Imagine a harp; it’s a string instrument with each string tuned to a set pitch, the strings plucked with fingers. Now imagine the ‘ukulele; it has four strings and a fretboard and can be either plucked or strummed to form chords and melodies. Now put them together. What have you got? The harp ‘ukulele! What exactly is it? Where did it come from? Read on to learn more.

The harp ‘ukulele combines both instruments into one by adding another neck (or two!) to an ‘ukulele and any number of strings. Some have one, some have two, and I’ve seen several with four strings. These strings are tuned to bass notes to give the ‘ukulele a more round and full sound than it is known for. The instrument enjoyed brief mainstream popularity in the 1910’s due to the popularity of the harp guitar, and the performance of Hawai’ian musicians at the 1915 Pan-Pacific Exposition in San Francisco. From there it fell out of the mainstream but has since been resurrected and given limited production.

Patented by Norwegian luthier Chris Knutsen in Port Townsend, Oregon, the first “One-Armed Guitar” appeared in 1896. Knutsen added an extra arm to the guitar to act as another resonating chamber, likely creating a warmer tone and better sound quality for the guitar. It also looked cool. He later added bass “harp” strings to this extra arm, expanding the frequency range of the instrument, and allowing the player to accompany themselves more easily. His harp guitars enjoy a cult following to this day.

The Pacific Northwest where Knutsen resided got their first taste of the ‘ukulele at the 1905 Lewis & Clark Exposition in Portland, Oregon, which historians believe Knutsen may have attended. It is known that he attended the 1909 Alaska-Yukon Pacific Exposition in 1909 in Seattle, Washington. After this, he began designing and manufacturing the harp ‘ukulele.

The earliest confirmed date of manufacture for one of his harp-‘ukes is 1913-1914, though it’s possible he started building them earlier. He wasn’t particularly organized. By the time the 1915 Expo in San Francisco came around, he was in the perfect position to cash in on the cultural craze for the Hawai’ian Islands kicked off by the event. Nowadays, they are treated as antique collectables, and cost a pretty penny if you find someone willing to part with theirs.

A little bit later, F.W. Altpeter created a “double bass ‘uke.” Even less is known about Altpeter than Knutsen, but we do know he was granted a patent in February of 1927 in Chicago, Illinois. This model features two strings on either side of the neck of the ‘ukulele, which makes it look symmetrical and beautiful. Even so, putting bass strings on either side of an ‘ukulele neck seems a little silly, and would make for some mental gymnastics when working out a musical piece. Perhaps this is why the design never caught on; only one is known to survive. 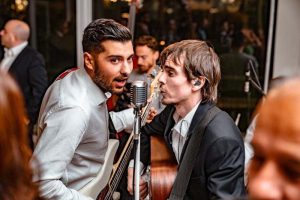 There are a few luthiers who make harp ‘ukuleles, however I’m sure you’ll find that most will only make one to order since there is such scarce demand. You can also expect a hefty price tag attached to your special creation. Here are a few I found from snooping around the Internet:

aNueNue Harp ‘Ukulele III – This modern version of the instrument has four bass strings and can be seen in this video being played by Sungha Jung. It has a full round tone and sounds as beautiful as it looks. It can be expensive and difficult to find; they do not appear to make these anymore, and the linked website claims there were only ever 12 in the United States.

Emerald Guitars Synergy ‘Uke – This sleek version of the harp ‘ukulele has four bass strings as well but is also electric with a pickup tucked in the sound hole on the top side of the instrument, underneath the bass strings. They build them to order, and the website says it takes about 5 months to construct one and get it to the buyer.

Duane Noble Harp ‘Ukulele – This is another harp ‘uke with four bass strings. Boasting rich tones and high-quality woods, this entrant to the list is finely crafted by Duane Noble, known for his harp guitars. Give him a call and see if he can make one for you! A custom instrument from a talented luthier is a treasure like no other. This page also informs us that the strings not only provide bass notes, but a natural reverb as well so you don’t have to play the strings to get a nice effect. This is caused by “sympathetic resonation,” meaning the bass strings vibrate in response to you playing the ‘uke strings. Here is an example of Corey Fujimoto demonstrating this. Take a listen; the audio is the dry signal with no reverb added to it, yet we still hear reverb! Amazing!

The harp ‘ukulele certainly is a novel and niche creation. Its history is also steeped in mystery. If you come across one at a flea market, be sure to snatch it up! These are rare and difficult to find.