The history of women’s rights and fight for equality has been a long road. It is still a long road, but thanks to female leaders of the past and present, women have a stronger say now than ever before. As we head into March – known as Women’s History Month – I invite us all to consider the female pianists who paved the way for women in this field of music. 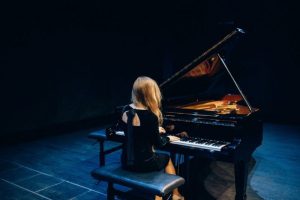 While the piano had become a household instrument by the 1800s and any gentile young lady would be expected to know how to play the piano as part of her education, being a female pianist by career was not an option. It was looked down upon for women to present themselves on stage for display, a societal convention that had even permeated opera in the centuries before.

The female pianist who first overcame these stereotypes to be known as a concert pianist in her own right was Clara Schumann. Clara Schumann (1819-1896) was a child prodigy from a musical family. Her father, Friedrich Wieck, was a professional pianist and teacher, also known to have taught Robert Schumann, who would later marry Clara.

Her father planned her music career with a strict music education early on. She made her concert debut at the age of nine and from there on concertized continuously until the end of her life. She was connected to famous composers and musicians of the time such as the violinists Niccolò Paganini and Joseph Joachim, and pianist-composers Frédéric Chopin, Franz Liszt, and Johannes Brahms.

She championed the works of her husband Robert Schumann and their friend Johannes Brahms throughout her life. She was known as a brilliant pianist who was one of the first to champion the memorization of music in recital. She was also a composer and performed many of her own works in addition to others.

As a teacher, she was the only female faculty at the new Hoch Conservatory in Frankfurt, Germany, where her fame attracted many students. She taught only advanced students and mostly female pupils, a few who went on to lead musical careers such as Adelina de Lara and Fanny Davies. Her teaching contributed to the improvement of piano playing technique of the times.

The next generation of female pianists

In addition to the Clara’s students, a few other names to know are Sophie Menter, Arabella Goddard, Teresa Carreño, and Marguerite Long.

Sophie Menter (1846-1918) was a favorite student of Franz Liszt. Her prodigious skill allowed her to create a repertoire and career unique to herself. She was known as “l’incarnation de Liszt” (the incarnation of Liszt) due to her fiery, electrifying playing style.

Arabella Goddard (1836-1922) was a child prodigy who performed for both the French Royalty and famous artists of the day such as Chopin and George Sand. She premiered Beethoven’s “Hammerklavier” Sonata for English audiences and was a champion of his late sonatas. She later became a faculty at the Royal College of Music in London, which was established in 1883.

Teresa Carreño (1853-1917) was a Venezuelan pianist, composer, and conductor, known as the “Valkyrie of the Piano” for her incredible energy and passion on-stage that seemed to bring the musical interpretations to life. She was much in demand as performer for over 50 years as an international touring artist. Her skyrocket to fame was due to the support by Louis Moreau Gottschalk, a famous virtuoso pianist from the Americas, who heard her play when she emigrated to New York with her parents.

With the increase in classical music training at established conservatories and music schools, the next generation of female leaders in piano were the famous teachers Rosina Lhévinne and Nadia Boulanger. Even though female musicians were on the rise, a performing career was still frowned upon by society expectations.

Rosina Lhévinne (1880-1976) was considered a pedagogical giant in the U.S. (along with her husband Josef), teaching at what would become the Juilliard School. She had many famous pupils, including Van Cliburn (Tchaikovsky International Piano Competition) and Garrick Ohlsson (Chopin International Piano Competition). She gave up her performing career upon marriage to allow Josef more limelight.

Across the ocean, Nadia Boulanger (1887-1979) was one of the leading pedagogues in France, with many famous composers and musicians traveling to Paris specifically to study with her. Her impressive roster includes Daniel Barenboim, Elliot Carter, Aaron Copland, Philip Glass, Darius Milhaud, Astor Piazzola, Quincy Jones, and Virgil Thomson. She was also the first woman to conduct many major orchestras, including world premieres of works by Copland and Stravinsky.

The two World Wars both launched some female pianists into their success, while damaging those of others. Two notable stories include that of Myra Hess and Clara Haskil. Myra Hess (1890-1965) had been a child prodigy and attended the Royal Academy of Music. During WWII, she organized wartime concerts in London at a time when concert halls had to be darkened at night to avoid attention of German bombers, bringing together many pianists and playing 150 of these concerts herself.

Clara Haskil (1895-1960) was accepted into the Bucharest Conservatory at the incredibly early age of 6 years old, later studying with Alfred Cortot at the Paris Conservatoire. Unfortunately around the age of 18, she began to suffer from scoliosis and had to use a body cast. That along with the onset of stage fright ruined her performance career for over 30 years. During the war, she lived impoverished with little resources and personal support. Miraculously, she was able to overcome her fear and health issues to return to the stage and the last few years of her life were the most successful.

Post-War Era and the Modern times

As we move closer to our present time, the number of female pianists increases greatly and there are many notable pianists not listed here. Alicia de Larrocha (1923-2009) is known for her extensive exploration of Spanish composers and music. Yvonne Loriod (1924-2010) is known for premiering many of Messiaen’s piano works, which are known to be technically demanding and musically abstract. Mitsuko Uchida (b. 1948) is known for her expertise in interpreting the music of Mozart and the Second Viennese School (Schoenberg and Webern). Martha Argerich (b. 1941) is a multi-faceted and legendary virtuoso whose career is still strong to this day.