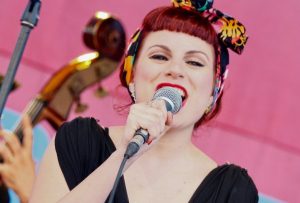 Listen, I love me a good, “gritty” rasp as much as the next person but, there is a time and a place. (Lookin’ at you, Chris Stapleton.) Yes, I said it, a vocal coach who likes to hear the enemy of healthy singing, or raspiness, every once in a while. It’s a great way to evoke emotion not just in your song but to the listener’s ear. They hear that rasp and affiliate it with passion, grit, pain, and so on!

However, there is a right way and wrong way to approach raspy singing. When you do learn and master the correct way, it is important to use it sparingly so as to keep your vocal health in line.

Starting with the basics: What is raspy singing?

Raspy singing is the sound your voice makes when your vocal folds aren’t vibrating correctly. In fact, they’re rubbing together unevenly and randomly rather than closing together and vibrating smoothly.

If you’ve been singing and you start to notice an unintentional rasp in your voice, chances are your voice is either over-exerted or your technique is off. “Controlled rasp” as we will call it is when you intentionally push more air through your vocal folds (without whispering) and lower your larynx to create that raspy or “growling” sound.

It’s important to note that raspy singing should only be done when you’re in full vocal health. You shouldn’t sing if you can avoid it if you have a cold but, you especially shouldn’t be attempting a raspy voice with a virus.

You also don’t want to sing with a raspy voice for an extended period of time. Controlled rasp should be used as more of a texture and color rather than your entire tone.

Be able to acknowledge when you are able to use the tone and when to stop. Like stated before, it’s important to be in full vocal health when singing in a raspy tone.

Have fun with it! Once you master this new skill, it will open up a whole new world of genres for you such as blues, rock, R&B, folk, Americana, and more! Raspy singing is used in such a wide variety of music, it’s fun to experiment with! Again, much like junk food, all things in moderation.

There are a few singers in this world who are given the gift of “natural rasp.” Can it be trained out of them? Yes, of course. There are many factors that lead to a singer’s natural tone, including medical and genetic. If you are not one of those people who has that natural rasp, here’s how you can start to build it, safely.

Start with a whisper on an “ah” like you’re trying to fog up a window. You should be able to hear your breath as you exhale.

Now, add tone to it, as little as possible, without it being a whisper, still on an “ah.”

Take a breath and sing an “ah” like you normally would. This time, start to go back to that “quiet ah” and give it a little push with your diaphragm and lean into it. You may feel your larynx (your Adam’s Apple) lower and a growl come out.

If you’re not trying to aim for the Chris Stapleton or Christina Aguilera growl, and more for the Billie Eilish airiness and tone then don’t lean so much into the tone. Simply give your voice a push from your diaphragm, thus pushing out more air from your lungs.

Repeat either one of these exercises until you reach your desired amount of controlled rasp. Again, do these exercises sparingly so as to not create problems such as nodules. You are actively changing your vocal folds’ natural vibration. Doing so for an extended period of time may cause serious damage to your voice. (Yes, I sound like a pharmaceutical commercial, I know, but I am also coming from a place of wanting your voice to be the best it can!)

You may be feeling that your breath support isn’t as strong as it normally is when doing these exercises and that’s because you are actively pushing more air out with a controlled rasp than with your natural, cleaner tone. Strengthening your breath support through breathing exercises can also help make the raspy tone easier to obtain.

Just as with any vocal exercise, remember to stay hydrated! Your vocal folds are muscles that need water and hydration to stay healthy. So, drink water regularly when perfecting your new tone!

Whether you were born with natural raspy tones or you simply want to add a little color and emotion to your performances, controlled rasp is an excellent tool to use sparingly. Have fun with it and remember to stay hydrated and keep your voice healthy!