Finding a singing style that suits your unique voice is like trying on shoes – what fits someone else may not work for you, even though it looks great on them. But just like with shoes, you’re not limited to just one style – so here are some tips on finding the right vocal choices for you and for the songs you want to perform.

How Do You Find Your Singing Style? 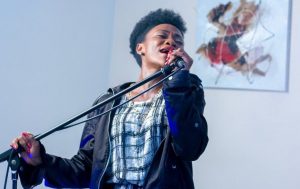 First of all, it would take as long to list every type of singing style as it would to list every type of shoe. (And now I promise, no more footwear metaphors!) But a good way to start is to look at what singers you like, what songs & range feel good in your voice, and what kind of feedback you get from others whose opinion you value (in other words, do listen to your voice teacher and musicians you respect more than to your Aunt Zelda who keeps saying, “Sweetie, you could sing circles around that Idina Menzel” even though you’re a soprano.)

Ideally there will be some overlap – for example, in my case, I was told frequently that I sounded like Carly Simon & Carole King, whose songs I love, and I’m an alto, so I know that style of gentle rock suits my voice. But I also love show tunes and vintage songs from the 1920s and 1930s – knowing my range means I will gravitate more towards Alice Faye, who was a low alto, rather than Jeanette McDonald, who was a high soprano.

What Types of Performance Opportunities Are You Seeking?

It also depends on what types of performing opportunities you are seeking. If you want to do musicals, and your local theater companies are doing primarily pop shows like Hairspray or Rent, you won’t want to focus on perfecting your Julie Andrews-style soprano. Or if your voice teacher is encouraging you to enter a classical singing contest, it won’t help to learn how to belt out “Defying Gravity.”

Again, here is where it is essential that you try to get good advice and feedback – even the most seasoned professionals continue to work with voice teachers and vocal coaches, and finding someone who really understands you and your voice is a vital resource for any singer!

Listen (to Music & to Your Teacher)

Teachers or coaches can help steer you in the right direction, but there’s a lot you can do on your own. For starters, listen! Compile as many songs in the style you’re considering as you can, which is so easy to do these days with platforms like Spotify and Pandora – once you line up a few tunes, they will suggest similar ones for you. You can sing along and see what styles, and what singers, fit comfortably with your range and your vocal type. And listen for those little details – pop songs use scooping and less precise diction, which wouldn’t fit a classical piece; for ‘golden age’ musical theater repertory, you want to sing the notes pretty much as written, but that’s not appropriate for blues.

Once you pick a song, listen to as many renditions of it as you can. So if you’re working on a smoky jazz standard for a cabaret show, find a few recordings of your tune, then see if there are other recordings by artists whose renditions you like, or who sound a little like you. The idea isn’t to imitate, but to learn (and borrow) from Ella Fitzgerald, Diana Krall, or whoever you choose.  You want to make the song your own, but also approach it in a way that honors the style of each tune.

Know that You Can Take a Detour

And it’s okay to pick a style that’s out of your normal range – but that makes it even more important to do some homework. A great example is Linda Ronstadt, the pop superstar from the 1960s and 1970s. She took a huge detour and recorded some big band albums – admirable in how she stretched herself and used her fame to boost awareness of these classic songs, and she had a beautiful voice, but if you listen carefully, she doesn’t seem quite at home, with some of her pop vowels sounding jarringly out of place.

It seems like Ronstadt assumed the songs would be easy to sing and would fit her voice, but it didn’t quite work.  However, for her next ‘detour’, she recorded several albums of the mariachi music she’d loved as a child, and this time she took some lessons and worked harder to master the different style – on these recordings, she sounds comfortable and authentic!

Frequently, popular singers take these creative detours, and the ones who studied the new styles are the most successful.  It’s not enough to have a fabulous voice (listen to the opera singer Kiri Te Kanawa singing cringe-worthy Gershwin standards; she’s trying, but she either over-sings or does exaggerated weird breathiness).

Sometimes you just need to learn what won’t work for your voice – like Ethel Merman Sings Disco. If you’re not familiar with Merman, she was the classic Broadway belter, in an era before microphones (1930s and 1940s), and her signature brassy belt could fill a Broadway theater to the last row of the balcony.  She recorded an album of disco arrangements of some of her earlier hits, and basically, she just did her usual style over the disco beat – it didn’t really work, but it’s hilarious to listen to!

Don’t Be Afraid to Experiment… You Never Know What You’ll Find.

Part of the fun of trying on different styles is broadening your range and repertory, so don’t be afraid to experiment; you may discover you have a real flair for jazz (or disco)!, and the more you learn about your new singing style, the more you’ll be able to master it and nail your next performance or audition.