Back around 2014, I decided I was going to improve at chess. I watched a few videos online about some openings, played a few dozen blitz games online, and then promptly lost interest within a week. Four years later, I decided to pick it up again and in less than a year, I had gone from 1100 to 1900 Elo rating online. Obviously, I changed how I went about my improvement! So here are the steps that I took the second time around that got me to where I am now, and some ways you can improve your chess game. 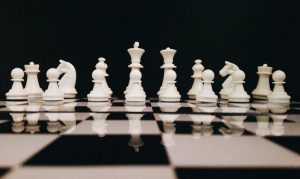 The most important thing to do when trying to improve your chess game is to play games. Learning chess without playing any games is like being a musician who never plays their instrument. Specifically, you should play long time controls; if you play blitz you won’t have time to think of complex or creative moves and, therefore, won’t have room to grow as a player. When I played three-minute blitz games, I often won by playing faster and timing out my opponent instead of playing better chess, this is not the way to improve. Chess.com and Lichess.org are both great sites to play on, as well as Chesskid.com for the youngsters.

Annotating a game is the process of writing down the moves of a game using chess notation and then making comments on the moves.

Now this was only a short game and annotating does get more labor-intensive as the game you’re annotating gets longer; however, not every move needs a comment and the comments don’t need to be as detailed as mine. The point of this exercise is to try and think the game over a second time without the pressure of a clock or your opponent glaring at you from the other side of the table. Consider keeping a notebook that you annotate games in or if you’re more techy, try annotating with Lichess.org’s study feature.

While 99% might be a bit much, Teichmann is correct that learning tactics is probably the most important thing when improving your chess game. A tactic in chess is a forcing move or series of forcing moves that lead to a gain of material or a better position. In short: tactics are how you win! So learn them and learn them well.

The easiest and cheapest way to learn tactics would be on an online tactics/puzzle trainer; Lichess.org, Chess.com, and ChessTempo.com are all great sites that have tactics trainers that will divide tactics based on common patterns. It’s important to learn the common patterns (forks, pins, skewers, etc.) so that your brain will naturally look for them in your games. If you’re looking to spend a little money, get yourself a puzzle book, a classic is Lazlo Polgar’s book Chess: 5334 Problems, Combinations And Games.

The 6th World Champion, Vasily Smyslov, was taught chess backwards; he was first shown simple endgame positions by his father and uncle before he learned anything else. This gave him a foundation to build on in more complicated positions and led to him becoming one of the greatest players of all time.

Endgames teach you the single most important skill when improving your chess game: calculation. Calculation is when you predict what your opponent might do and try to plan ahead accordingly. Endgame positions will also demonstrate simple strategic ideas that you will start to notice in more complicated middlegames. To further your endgame knowledge, consider getting Jesùs De La Villa’s book 100 Endgames You Must Know. Also, Chessable.com has free endgame courses and so does Chess.com.

Learn an Opening (Or Two)

Chess is broken down into 3 main phases: the opening, the middle game, and the endgame. The opening stage is the very beginning of the game and can cause beginners to freeze up considering all the possibilities. An important thing to do is to avoid memorizing moves without any understanding, instead aim to learn the ideas and goals of an opening as a whole.

Learning an opening and sticking with it means you will usually be starting your game from a position of strength and familiarity. When picking an opening to learn, you should generally pick an opening that teaches good opening principles—for example, The Italian Game is a strong opening, the Crab Opening is not. Chessable.com has many courses on openings that use spaced repetition to help you remember the first moves of the game.

Study the Games of the Old Masters

Finally, you can put all of these together by studying the games of the old masters. Looking through the game of a much stronger player can do wonders in terms of improving your chess game. The most instructive games tend to be from early on in chess history, as more modern games can often be too dense. Try to take away a single lesson from each game.

For example, the previously used Greco game shows us that the f-pawn should be known as the ‘forget about it’ pawn as advancing it weakens the kingside. A great site to go and find games to study is Chessgames.com. For an extra challenge, try annotating them!