Ukulele strumming patterns can help you fit right into a specific style or make you stand out like a sore thumb. There are multiple aspects to strumming in various styles, including:

To fit into a certain style, you must understand and match those aspects. Listening is key, as well as mimicking favorite songs and players. While I don’t usually teach specific ukulele strumming patterns to my students (instead I give them a framework for technique and understanding rhythm to then figure out strumming by feel), I will show you some common patterns played for each style. 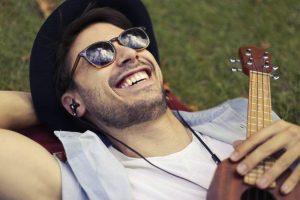 Rumba for a Spanish flare

Again, the best way to figure out strumming is to ensure you can feel the beats, the accents, and the eight-note swing, and then base your playing on a constant up and down hand motion on your strumming hand. Once you get the feel for these in the style you choose, you can figure out a pattern that sounds good by ear and by copying your favorite players.

The Most Versatile Strum Pattern for Ukulele

One of the most common strumming patterns found in a range of styles can be played over a simple 4-count. You can apply this pattern to folk music, country, bluegrass, classic rock, Island music, you name it – basically, all styles. The main difference between the styles is the speed at which you play this pattern. The pattern is as follows:

To get the feel of the eighth notes, imagine the clickety-clack of a trolloping horse. (Check out the video demonstration here) For an example of a song with this pattern, check out “Wagon Wheel” by the Old Crow Medicine Show. There is also the song “Blowing in the Wind” by Bob Dylan. Really, you can apply this pattern to almost all songs in almost any style. Practice with a constant down, up motion in your strumming hand and miss or “ghost” the strings on the beats that are not strummed – you can notice that in the demo video.

Old time and jazz-based music is a great setting for the ukulele. Its higher range helps it stick out among the other instruments. Add in the right style of strumming with a more percussive approach, and you have captured the feeling of the times. Throughout the history of jazz in America, stringed instruments like the guitar and banjo were used as part of the rhythm section to help give more drive.

Because there was no amplification back in the olden days, the string players would have to figure out how to be heard. Thus, the hard-driving, percussive style of playing was born.

No more is this evidenced than by the Manouche style of jazz made by the famous Django Reinhardt. The style of strumming for Django became known as “le pompe” for its pumping, relentless driving rhythm. While the idea behind “le pompe” is seemingly simple and straightforward, the execution of capturing just the right feeling takes a bit of practice and exposure to the style.

As with most 4 beat measures, the accent lies on the backbeats of 2 and 4. The eighth-note feeling is definitely swung, but in a harder, more choppy way than later jazz, and we generally only get a slight alluding to it at the end of a 2-bar cycle. (Check out the video demo to hear an example). The strumming pattern is as follows:

The accented beats help keep the rhythm driving by acting as guiding percussive hits along the way. The result is a sense of jumpiness very indicative of the style, which is often danced to.

One of the most important aspects to this strumming pattern is actually found in the fretting hand. Using a technique called string muting, the fretting hand only presses down the chords when strumming the beat and then quickly releases the pressure on the strings to keep from ringing.

The result is a pumping motion in the fretting hand and constantly adding pressure and then quickly releasing. Use this to recreate the styles of old and to bring in modern songs into the old style. My favorite ukulele song in this style is “Wanna Be Like You” from Disney’s The Jungle Book.

Try a Flamenco Flare with a Rumba Strum

Rumba from the Flamenco tradition, is a fun and energetic style driven by the strumming rhythm. It can incorporate some percussive hits while strumming and some other strumming hand fingers and the thumb. I will show you an easier variation with just one finger and a percussive hit to get the feeling of the rhythm. Then you can try other alternate fingers to smooth it out as you gain more experience.

Notice the percussive hit acts like a second accented beat in the measure, and the first accented beat is on the up of 2. The accent on the “&” of 2 gives this pattern a syncopated feeling. Practice slowly at first and then speed it up as you become more comfortable with the rhythm and the timing of the hit. Use this is a simple Rumba progression of Em, B7, Am, and C6. Check out a demonstration of the rhythm here.

Island-style strumming can mean slightly different things to different people. In this context, I think of the strumming in terms of the feeling of the swinging eighth-notes and the accents – those are the 2 distinct aspects that give the feeling.

The reggae strum is similar but our island strum will be a little softer and not as “skanky” as they say in reggae. For this style, think Jason Mraz and Isreal Kamakawiwo’ole and, of course, Bobby McFerrin’s famous “Don’t Worry Be Happy” song.

For the eighth-note feel, imagine coconut shells, swinging hula hips, and hammocks – it should make you want to gently rock back and forth. The accents are strong on beats 2 and 4, but equally as important, the strums are softer on beats 1 and 3. Take a listen to catch the feeling.

This pattern is more feeling than rhythm, so listen to as much Island music as possible to really capture the groove.

Strumming Your Heart Out … For a Rock Ballad

Rock ballads are typically slower paced with both the tempo and the rate of change for the chords. As such, we have a longer arc for a strumming pattern, which usually goes over 2 measures. Taken from examples, like Guns ‘n Roses’ “Patience,” to The Eagles’ “Hotel California,” this pattern is great for slower songs with more drama. Because it is slower, we can feel more of the 16th note subdivisions and put the groove on those. Hint: count out loud to help get the feeling.

Here is a demonstration of the pattern.

Strumming Patterns Are NOT Required

Ukulele strumming patterns are a good start for learning styles and playing songs., and these 5 patterns will certainly give you an insight into their respective styles. However, it is more important for a musician to feel the rhythms and express their own rhythmic patterns in their playing. Use the count, the accents, and the feel of the subdivisions to catch the groove and then express it through your playing.

When we strum, it is like playing drums – and we all “play drums” on our laps when we hear a great song, right? Or is that just me? Use your natural feelings of the beat to create your own strumming feelings and leave the patterns at home.