Songwriting is a seemingly mystical process by which some universal truth is almost subconsciously dictated through you as an empty vessel on to a blank page. It often – but not always – takes a form. It often – but not always – has a rhyme schema. And frequently – though not always – can follow a formula. Whether you’re just starting as a singer/songwriter, or you’re a veteran musician, the songs that make their way onto our hearts are not written so much as they are discovered.

Songs happen. Songs are lived. We are here to come upon them – if we are open and listening. 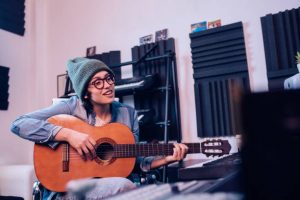 To put a formula to this sacred process runs the danger of leaving us grasping for truth. To give songwriting prompts hopefully jumpstarts a process that will run on its own after the jump, much like a car will run after a jumpstart.

However, we can look at many songs and see commonalities which run through each of them. The most human of questions are usually answered in song, namely: who, what, where, when, why, and how. So, let’s look at a song and see how these most human questions were satisfied, and how they can act as prompts for us to craft our own piece.

Let’s Look at an Example

Let us take the song Saturn by Sleeping at Last as our song of study. I hesitate to use this song because of how sacred the song is to me. I can still remember the first time I heard the song. It was the backdrop of video with Alan Watts, explaining why life is not a journey. I knew I had to find the song a listen to it repeatedly. Why? I don’t know. But let’s see how Ryan Adams demonstrates our songwriting prompts questions – and shows us that by determining  who, what, where, when, and why, we can jumpstart our songwriting process.

The song is about a lover and a loved one. Not a romantic love necessarily, but a lover being one who loves. In these lovers’ relationship, the song also tags on teacher and student of life. Who else surrounds your dying bedside but those whom you love?

Clearly these are dying words, words you would say if you could only inscribe one thing on your lovers’ heart. The dying words are in the form of a metaphor about stars and their courage before they land, never directly answering this question. This moment is a teaching, and a tender moment. Do you know that when we see a star we see its light after the star has died? What does the personification of stars mean for them? For us? What is the purpose of life, the meaning of it all? That is what this song sets out to answer, while attempting – at the same time – to be consolation to the lover.

While never explicitly saying so, because it’s not necessary, we know that these are death bed words. This could be anywhere, but as it is a plea and an epitaph, we know that the loved one is dying, and paradoxically has a finite amount of time despite the lesson being taught. We know this because we can imagine one dying as having a shortness of breath. The energy to say anything more just does not exist.

This is a complex, yet simple answer: at the time of death. But the answer to the star’s courage is that light is infinite. Can it be consolation that we go on forever? We also get a sense of time as the lover desperately tries to find a pen to write down these words. Put the pen down. Listen, because you cannot hear these words spoken again. The when of this song is shared finiteness and shared infinity, both and at the same time.

What is the point? Why these words? This is how you are to live: As if the universe was made to be seen only by your eyes. The universe and all its splendor were created but for you. By your eyes, by everyone’s eyes. It’s beautiful and rare to even exist in this huge galaxy we call home. Our mere existence is nothing short of miraculous. But our fine existence is infinite, just as the stars light. So, weep not lover. Life goes on endlessly, even after death. The song has a deep why that ties in and influences its instrumentation.

How is the meaning of life conveyed? We just read and went through the lyrics. The how is through the dying words of a loved one and through the scenario we’ve been describing.

At the end, the one being taught becomes the one dying saying these words to someone else meaning that this beauty of existence goes on forever. The infinite is ours and always has been. This is a twist unexpected yet perfectly sensible given the tone and meaning of the song.

Of Course, So Much in the Songs You Write Will Be Inferred 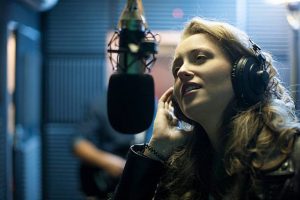 So much in this song is inferred. It’s not explicitly said that the lover dies. It does not say why stars are courageous. It does not say why the lover wants to hear it again. So much is left to be understood simply by painting the picture. I don’t have to tell you a star is courageous. You know this. I don’t have to tell you that in your singularity you share in the infinite because at the end of the day, we cannot deny how rare and beautiful it is to even exist. You know this. Remember that, as the singer/songwriter, you don’t have to necessarily spell out the details for your listeners.

Let your songwriting spark your audience’s imagination as much as it sparks your own, use these songwriting prompts to get your ideas flowing, and don’t be afraid to use some of your own!