One of the most iconic sounds in music is the sound of a ukulele strumming patterns. It automatically conjures up in one’s mind scenes of a beach in Hawaii (which happens to be the title of an amazing Ukulele song by Ziggy Marley, but we’ll get to that) with its tiki huts, hula skirts, and lei. It’s most likely what brought you to want to learn the ukulele in first place.

And this technique, strumming, is one of the first techniques you need to master in order to bring your Ukulele playing to the next level. And for the most part we tend to learn strumming by first thinking about specific “Strumming Patterns” in order to get down this back and forth coordination. In this article I will first describe to you proper ukulele strumming technique and terms, and then give you five of the most useful ukulele strumming patterns.

To play in the most traditional ukulele style you would use the index finger on your strumming hand to strum the strings down and up. When you strum down you will be hitting the strings with your nail, and your pad on the way up. The first step to making your strum patterns rock solid is to get a nice back and forth flow going with your up and down strokes. Once those feel rhythmically even then we can move on to actual ukulele strum patterns. 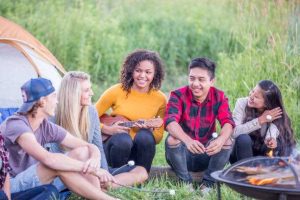 The first pattern we’ll talk about is actually the pattern I just described, but with some emphasis. The way that we typically write strum patterns is:

So the way that we would write down just a back and forth, down and up pattern would be:

This implies that each stroke is even, and that you’ll play an up stroke directly after a down each time. What makes this pattern pop, in songs like I’m Yours by Jason Mraz, is to put emphasis on certain notes within the pattern. What you want to do is accent, the term we use for making a note more pronounced than the others, the notes on beats 2 and 4.

Now this deserves some explanation concerning rhythms. This pattern is in 4/4 time, which means that we count up to four over and over throughout the song. So each down stroke (D) you see in the pattern is a different number, one through four. So this means that the second and fourth downstrokes need to be played harder than all the other strokes to make this sound like the pattern to I’m Yours.

Now we can’t get too far into a ukulele strumming pattern article without talking about reggae strumming. Reggae strumming, while it sounds simple, can be tricky to fall into without the proper explanation. A song that uses this pattern has already been mentioned, the song Beach in Hawaii by Ziggy Marley, son of Reggae great Bob Marley.

This strum is simply:

But where are the downstrokes? This pattern uses only upstrokes, but that doesn’t mean we don’t let downstrokes play a role. We want to start the pattern with a “ghost strum”, which is what I call a strum that you play that doesn’t make any noise. You need to play a downstroke motion on all main beats (1, 2, 3, 4) but make it so you make no actual contact with the strings. This will set you up for an upstroke on an upbeat. Upbeats are typically said as the word “and” (sometimes listed as “+” or “&”), so you would only be playing the “and” beats. I would recommend counting yourself in with “1, 2, 3, 4, 1” to set yourself up for that next upstroke to come directly after that last “1”. 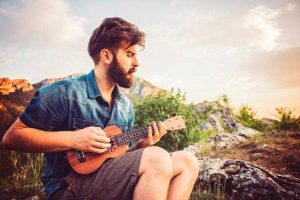 This pattern is most famously used in the song Riptide by Vance Joy. For most of my students this is the first strum pattern they learn: it’s fun and can sound good at many different speeds. The thing to be most careful about is that it is missing a down stroke, but remember, we play this beat as a “ghost strum”. So we’d play actual downstrokes on beats one and two, a ghost strum on beat three, and then an “and four and” count for the last three strokes.

This pattern is perhaps the most popular on ukulele. This is typically named the “go to” strum, and is used as a kind of a one-size-fits-all ukulele strumming pattern. One song, out of many, that uses this strumming pattern is Taylor Swift’s song Mean. Again, be careful about the ghost strum on beat three of this one.

The final pattern is in a different time signature: 6/8. This count as six beats total, so six downstrokes, and is found in songs like Hallelujah by Jeff Buckley or House of the Rising Sun by The Animals. You will play all six downstrokes but add an upstroke after beats three and six.