Just to the west of Mongolia is a land known as Tuva, where authentic singing known as Khoomei is still practiced. We in the west know it has throat singing – or overtone singing.

Khoomei originates from mountain herders as a way of communing with nature. In the sounds of throat singing, you can hear the winds pass through the mountains and plains, the babbling of the brook, and the rolling of the thunder. This comparison comes from the Tuvan’s practice animism, whereby all of nature: stones, syncopated water, cantering animals contain spirit, and in singing, the herders and mountains people become one with nature in this sense.

The sounds they made were onomatopoeic with their natural surroundings, known as sound mimesis. It should be noted here that overtone singing is not unique to Mongolia or Tuva, but can be found among the Inuit peoples, South Africa, Tibetan Buddhism, and beyond.

Bringing Out the Natural Overtones Present in Vowels

In the practice, there always exists a fundamental. And the voice, particularly the larynx, vocal tract, vocal folds, and oral cavity manipulate in such a way as to bring out the natural overtones from the overtone series present in the formant of respective vowels.

This source, or fundamental, provides the raw energy needed by the vocal tract to produce harmonics. (we experience harmonics aurally as timbre). In throat singing, a single harmonic gains strength, and can be heard along with the fundamental at an equal or greater amplitude within the singer’s formant. To achieve the sound, the singer strengthens the harmonic by adjusting the fundamental, through adjustment of the vocal tract, in line with one of the formants’ peaks, thus creating two or more audible tones.

Throat singers keep the vocal folds open for a smaller fraction of a cycle and shut longer. This abrupt closing puts greater energy into the higher harmonics. What is more, the longer phrases help maintain the resonance in the tract by reducing sound leakage back down the windpipe. By protruding the jaw slightly forward and rounding the lips, singers are able to line with a formant and dampen the other harmonics so that one is heard over the other. 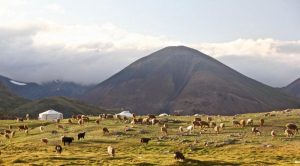 Mongolian throat singing more accurately refers – because of today’s geopolitical landscape – to the area known as Tuva, in what would be Western Mongolia. It is a present-day practice handed down where herders and people commune with nature in a sound mimesis; men and women alike. Be careful in your explorations and when searching for information on Mongolian throat singing not to to distinguish simply overtone singing with true, Tuvan throat singing, a much more nuanced and varied style with richer sounds.