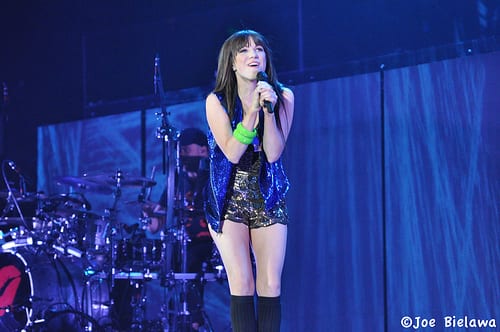 Remember Carly Rae Jepson’s summer hit “Call Me Maybe”? It seemed like it was everywhere – on every radio station, in retail stores, and stuck in our heads! Jepson certainly had control of the Top 40 radio waves for a while there, but there was also a lot more to it. Researchers explained that the tune was a prime example of an “earworm” – a song that, by definition, you just can’t get out of your head. NBCNews.com even called it “arguably the earwormiest song in recent memory.”

So once a song is stuck in your head, how do you get it out? Before, experts suggested avoiding all music and cues associated with the song, including the title of the song, the artist’s name, and any memorable lyric lines. But how realistic is that? After all, “Call Me Maybe” was playing everywhere. Hiding from Top 40 songs is much harder than you would think.

However, scientists have now determined the solution for getting these songs out of your head. The study was led by Dr. Ira Hyman, a music psychologist at Western Washington University. The cure? Cognitive activity that isn’t too easy or too challenging. Walking, driving, and other everyday activities? Too easy; the song will creep back up into your mind. Try challenging activities like Sudoku puzzles, on the other hand, and your mind might actively look for things to distract itself with (“Hey, I just met you…”). The perfect middle-ground activity, they found, was anagram puzzles!

So the next time you get a song stuck in your head, consider this cure. Readers, what do you think? Have you tried this strategy, and does it work for you? Leave a comment below!

You might also like…
– Infographic: SXSW 2013 By the Numbers
– Research Confirms Drummer’s High
– There’s a Music App for That Infographic