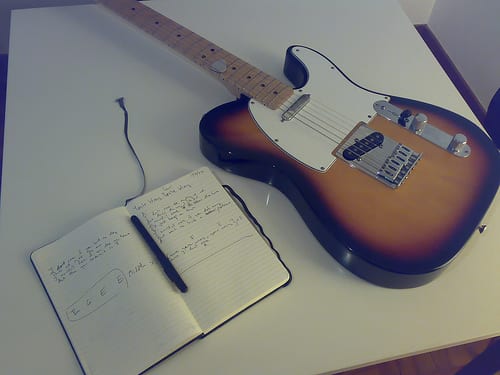 Did you read the guitar songwriting tips earlier this week? If you’ve reviewed your chord theory, it’s time to get down to business. Read on as Clearwater, FL music teacher Jeremy R. explains how to organize your song and the importance of the hook…

For me it doesn’t always start the same, nor will it ever end the same. Sometimes it’s a melody I hear in my dreams and I wake up and immediately start singing it. Sometimes it’s an alliteration of words in a conversation at lunch. Wherever you draw your inspiration from, all songs have a meaning.

Sometimes you start out not sure what you’re going to do, but you want to write a sad song with a mad ending. There are no steadfast rules. Songs can be as short or as long as you want them to be. But how do we live in this white space? The Doors once put out a song called “The End,” which is nearly 12 minutes long and includes long guitar solos and spoken poetry. John Cage’s most famous piece involved a pianist sitting down, setting a timer for 4:33 and when the timer goes off he gets up, shuts the piano lid and leaves. The piece is filled with the sounds of the environment.

Therefore, nothing that I am about to recommend to you is a steadfast rule or a law. These are just generalized ways of organization that are common in modern contemporary music.

For our first in-depth academic study, listen to the song “Hook” by Blues Traveler. “Hook” is a song about a song. It tells a story and then a broken story, and then a ton of nonsense in its verses, but what you remember is the “hook brings you back.” The hook or chorus of a song is usually the most memorable part. Granted, this isn’t a rule or law, so you don’t always need to have a hook. But most songs do. The hook is arguably the most important part of your song, so make sure it’s what you’re looking to say.

Next, let’s look at verses! Bruce Springsteen was one of the greatest verse writers to ever grace pen to paper. He could paint vivid pictures with the words he chose. He said exactly what he wanted and didn’t repeat himself much. He often pieced the story together and made it resolve at the end of the song. Rob Thomas is a more contemporary counterpart, who is very good at crafting stories within songs. When you look at overall verse length, try to keep it to roughly one minute. Time yourself singing the verse and see how long it is. If it’s too long, you can cut the story up more and take part of that to verse two.

So we have our hook and we have two or three verses. Now it’s time to put it all together. Time yourself singing the song from beginning to end. If the whole song is less than three minutes, I would suggest adding a solo over where an extra verse could be, or writing another verse. If you’re over three minutes, congratulations! I wouldn’t go over seven or eight minutes unless you’ve got a really long story to tell.

Just remember there are no wrongs or rights, and there are ABSOLUTELY NO SONGWRITING RULES! Sorry all you rule-breakers out there… you’ll have to write punk songs!

You might also like…
– Songwriting Tips from a Grammy Award-Winning Musician
– Getting Started with Composing for Films
– How to Be a Rock Star: Learn the Rules Before You Break Them