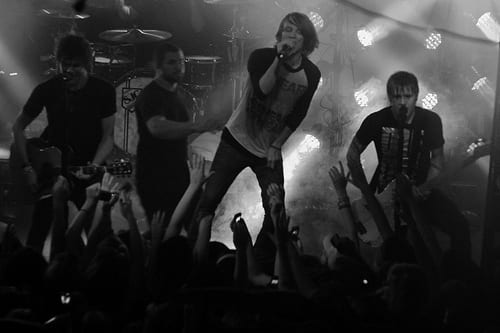 Imagine you’re in a new city, looking for somewhere to eat. You and your buddies decide that Mexican food is what you want, and you see a few options down the road. Sure, you can look at their menus, but how do you really know which restaurant is better?

Many people in this situation might turn to Yelp, the website that allows users to write reviews for everything from dentists to dollar stores. In this generation, when sharing your opinion with strangers is almost expected, word-of-mouth recommendations coming from social sites like Yelp are usually held at a much higher regard than any paid advertising.

Now, let’s flip this into the music scene. You’ve heard all about that awesome new band that’s topping all the charts. As polished as they sound on the radio, how do you know what they’re like at a live show? Do they kill it on stage, or do they leave you wondering what just happened? Is it worth your hard-earned cash, or are you better off paying a $5 cover to hear a lesser-known band at the dive bar down the street?

Enter ShowScoop, the newest social platform to join the scene. The idea: members can review live shows and music festivals they’ve attended, rating bands on things like sound quality, stage presence and crowd interaction. In addition to the concert reviews, ShowScoop also offers an exclusive community feel for its members. You can keep track of what shows you’ve been to, and also see which shows your friends have attended. And similar to Yelp’s “Elite” status, members with the most reviews may eventually gain access to private parties and VIP events.

And there you go – never be disappointed at a live show again. Or at least that’s what they’re hoping to achieve.

The website is still in its initial launch (as of today, it had a little over 100 reviews in total),  but we think it’s an interesting concept. The power of peer-to-peer reviews is undeniable – but would you really let a couple of bad reviews sway you from seeing a band? Just because they were “off” during one show, does that mean you wouldn’t give them a chance? Readers, we want to know your thoughts. Would you use – or rely on – these reviews to make your ticket-buying decisions? Leave a comment below, or stop by our Facebook page to join the discussion!

You might also like…
– Surprising Findings: Where Most Teens Listen to & Find New Music
– Getting Started with Music Recording
– gTar: Is This Grown-Up Guitar Hero Worth It?