As you learn Spanish, you’ll come across rules that are important for writing. In this article, you’ll learn all about Spanish accent marks and when to use them…

Most beginners ignore accent marks when they appear while learning Spanish. They don’t know what they mean, or know how to use them correctly. Beginners often assume that their word processor will help automatically place them when typing in Spanish and that accent marks and rules aren’t mandatory to fully understand Spanish.

This isn’t true, and ignoring them only hinders your learning. The good news is that they’re easier to learn than they seem. Understanding Spanish accent marks enables you to appreciate one of the many beautiful aspects of Spanish that makes it unique.

Why You Should Learn Spanish Accent Marks

If you understand Spanish accents, you’ll not only impress native speakers, but you’ll also know how to pronounce words precisely, and you won’t be confused when you come across a written word with an accent.

An accent mark shows you exactly how a word is supposed to be pronounced, and often times, it even shows you what that word means. It makes Spanish pronunciation and comprehension that much easier.

For comprehension, an accent mark can tell us the differences between two words that sound the same but are spelled differently. (See the “homonyms” chart below).

Accent marks are only used with five vowels (a, e, i, o, u), and they’re written from lower left to upper right on top:

Add accent marks when the word’s stress doesn’t follow Rule #2 or #3, meaning the stress doesn’t lie where it does normally. This means that when we pronounce words with an accent mark, we put the stress on the letter that is accented instead of basing our pronunciation solely on the last letter of the word.

(Rule #2 would say stress the a, but instead, the accent mark shows you to stress the second “o.”)

(Rule #2 would say stress the e, but instead, the accent mark shows you to stress the “o.”)

(Rule #3 would say stress the u, but instead, the accent mark shows you to stress the first “a.”)

(Rule #3 would say stress the i, but instead, the accent mark shows you to stress the “a.”)

Accent Marks, or Tildes, in Questions

Accent marks are also used in Spanish with direct or indirect question words: 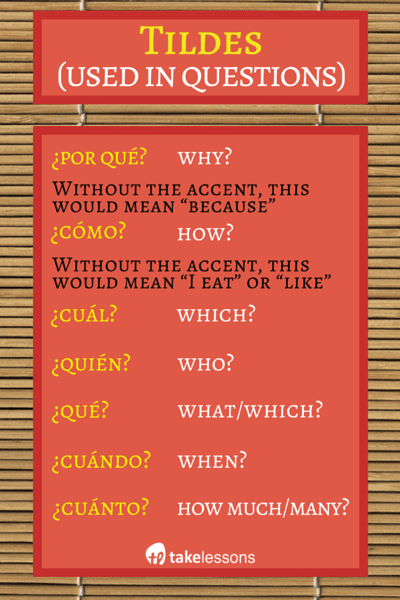 Lastly, what about homonyms in Spanish? Spanish also utilizes accent marks to distinguish between homonyms, words with the same pronunciation but that have different meanings. For example: 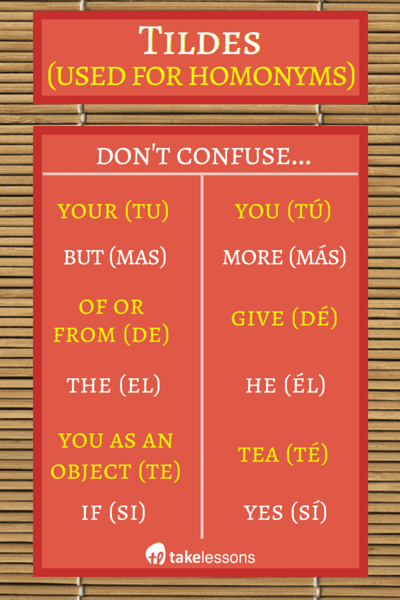 The above vocabulary will likely take some practice… but eventually it’ll become like second nature! 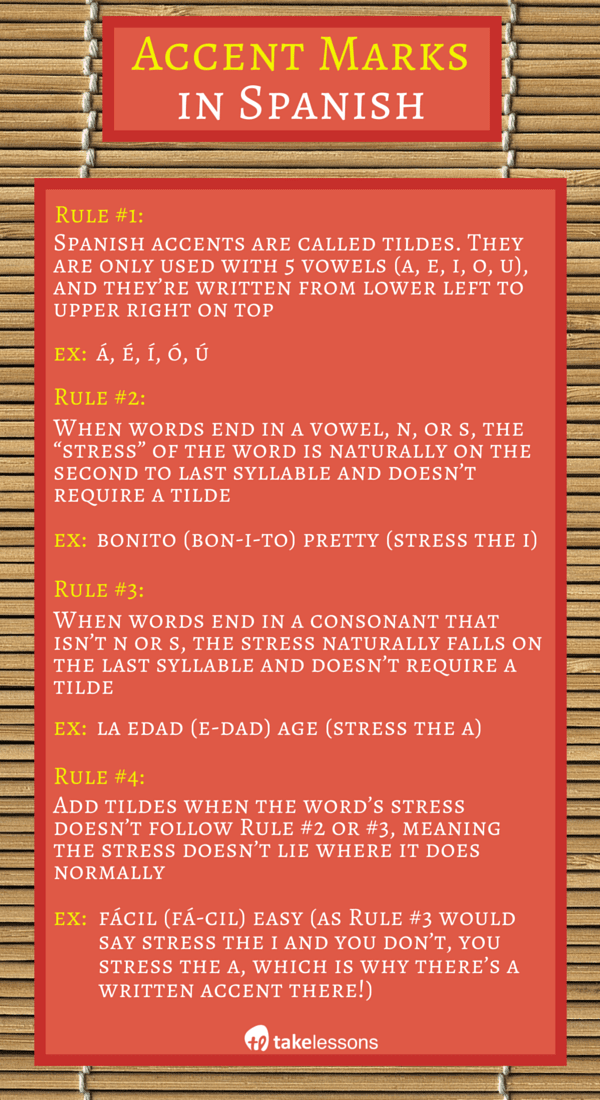 When it comes to writing an essay or paper in Spanish, there are a couple different ways to make sure you’re adding accents properly. Many writers choose to use keyboard shortcuts, like the ones you’ll see here. Keep in mind that the commands will be different from Macs to PCs.

An even better option is to download a word processor like Mellel that has multilingual functionality. Mellel allows you to write easily and effectively in the language of your choice, with over 200 different options available.

Still need help knowing when and where to use Spanish accent marks? Find a Spanish teacher online, or near you, for additional one-on-one tutoring!

Thank you . This was very helpful. I am a teacher and wanted to find a simple way to present this information to my students.

Some of the syllables are not divided correctly eg. Tom-ar and Cap-i-tal. They are suppose to be divided as To-Mar and Ca-Pi-Tal respectively. Beyond this this is a post I'd recommend to learners of Spanish diacritical marks and accent marks :-D
Comments are closed

Each week, we will uncover and break down grammar topics! Each class provides an easy way to understand explanations of grammar.
Sun 9/25 @ 6:00am PDT Learn More

Donde Esta? Learning About the World Through Spanish

In this class, we will practice reading in Spanish to build our vocabulary. Through the study of biology, history, geography, and more you will develop your ability to use context clues and gain a deeper understanding of the Spanish language. Taught by an MA in TESOL with 14+ years of formal Spanish education. Vamanos!
Sun 9/25 @ 6:00am PDT Learn More

Ready to go onto the next level? Each class provides an easy way to understand explanations of grammar usage, by comparisons with English grammar when needed and clear examples that illustrate and clarify the grammatical explanations.
Sun 9/25 @ 8:00am PDT Learn More

Some people have a good level of reading comprehension but do not know how to express themselves or understand everything when someone speaks to them. Also, there are people who understand the spoken language perfectly but have problems when it comes to speaking it themselves. Listening Comprehension can help you with that. After reaching a certain level of comprehension, you will find that you understand a wide range of topics and are able to have more in-depth conversations with native speakers. On top of that, listening to Spanish, it will help you to spot some of the mistakes you make when speaking the language while at the same time solving other grammatical problems. So come join us as we continue our road to success!
Sun 9/25 @ 11:00am PDT Learn More

Donde Esta? Learning About the World Through Spanish

In this class, we will practice reading in Spanish to build our vocabulary. Through the study of biology, history, geography, and more you will develop your ability to use context clues and gain a deeper understanding of the Spanish language. Taught by an MA in TESOL with 14+ years of formal Spanish education. Vamanos!
Sun 9/25 @ 11:15am PDT Learn More

In this class, we will study various Spanish language songs to develop our speaking fluency. Singing is a great way to review the unintuitive ways words are pronounced and how they are spoken differently as parts of sentences than in isolation. We will also learn new vocabulary along the way. Singing is not required! Listeners are always welcome.
Sun 9/25 @ 12:00pm PDT Learn More

Would you like your child to learn Spanish? In this fun class, we will learn fun words and phrases. Did I mention that we will be games and it will be loaded with coloring too?!
Sun 9/25 @ 12:00pm PDT Learn More

Conversation Practice: Talking About Yourself and Others

Get ready to start speaking Spanish with more confidence than ever in this lively group class! Join other students working towards the intermediate skill level to practice your Spanish phrases and vocabulary in real conversation. Nothing works better to improve your Spanish skills than practicing out loud with other Spanish speakers. You'll notice continual improvement in your speaking skills with this class.
Mon 9/26 @ 8:15am PDT Learn More
Learn Spanish Free Today