What is timbre? Timbre in music is also identified as “color.” It is the quality and tone of a sound which makes it unique.

Timbre is also defined as auditory senses produced by a sound wave. In other words, it refers to a sound’s characteristics that help you distinguish it from any other sound.

For instance, you can recognize the difference between hearing your father talk versus your grandmother because they each have their own distinct timbre.

Understanding timbre in music is important for all musicians, especially singers, when you want to produce a different tone or quality in a piece of music.

Different timbres are described using words like brassy, breathy, round, full, or bright. You can use different types of vocal timbre to create a sound that gives the right “feel” or emotion to your music.

It’s not just about playing or singing “with feeling.” You should know how a tone is utilized to achieve that emotion.

The sound waves produced when someone sings a note are different for each individual person because there are multiple factors that go into the production of a sound, such as breath.

The timbre of a sound depends heavily on its waveform, which varies with the number of overtones (AKA “harmonics”) that are present, their frequencies, and their relative intensities.

The illustration below shows several unique waveforms, to give you an idea of what this looks like. 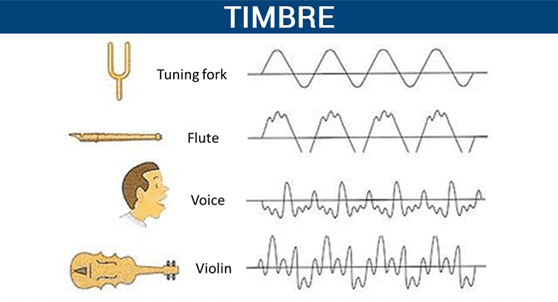 Musicians create varying timbres, based on both their instrument and the number of frequencies the instrument emits.

Each note from a musical instrument is a complex wave containing more than one frequency. The video below examines the timbre of several different instruments and explains how the way that you play an instrument affects its timbre.

One example of timbre in music is known as “attack and decay.” When someone plucks a guitar string or strikes a piano key, the sound is hit forcefully; it’s loud and then sort of dies away.

This explains how the same note can have a different timbre when played differently by another musician.

So, what factors affect timbre in music? There are multiple, depending on the instrument. For example, the way someone pushes air through an oboe will contribute to the sound frequencies that are emitted and the way it is heard, giving it a distinguished timbre.

Things like forced air, breath control, posture, and so on are all factors that affect timbre. Small differences in the frequencies are also a factor – how many you can hear, their relationship to the pitch, and how loud they are.

Timbre in the Voice

When singing, your timbre is affected by either constricting or opening different parts of the vocal tract, like the tongue and throat. Posture and breath control also play a role.

Most singers are familiar with their voice type – whether it’s soprano, alto, tenor, or bass – and these classifications are related to timbre as well. Understanding which sound waves are high, low, and mid-level can help you identify your voice type.

Your speaking voice even has its own timbre. The unique soundwaves you create when speaking are what allow you to be recognized by others. Common examples of timbre in the voice are sounds that are piercing, resonant, light, flat, mellow, dark, or warm.

One example is Celine Dion. Her voice is often categorized as “silky,” whereas someone like Ella Fitzgerald has more of a “smoky” timbre.

Vibrato is another way to identify timbre in a singing voice. It provides color to a lengthy note that is held, changing its frequency and tone.

Now that you understand the implications of timbre, how can you apply them to your own music? One of the best ways to improve upon your timbre as a singer is to work with a vocal coach – someone who has a deep understanding of timbre and its use.

A voice teacher can work exclusively with you to help you identify your distinct quality and tone. They’ll also show you how to adjust it to get the sound and pitch you desire, especially when working on a particular song that requires a specific emotion or feeling.

Because there is no one else like you in the world, learn to appreciate and take pride in your unique timbre. Whether you’re a singer or musician, your timbre sets you apart and helps distinguish you from other artists!