One of the most important aspects when learning how to play the violin is understanding scales. Learning scales will give you a solid foundation as you begin to explore new pieces of music.

Simply put, a violin scale is a series of notes, ordered by frequency or pitch, that span an octave (a consecutive set of eight notes.) For instance, to play a G scale, start by playing the lowest G on your violin (open G string.) Then, ascend up in pitch and play the notes in consecutive order until you reach the next G on your instrument (third finger on the D string.) Next, descend down the scale and play each note again, but move backwards until you return to the lowest G (open G string) on your violin.

Each scale is accompanied by a set of naturals, sharps, and flats which determine what type of scale it is. There are many different types of scales: major, natural minor, harmonic minor, etc, but as a beginner, the first type of scale to focus on and master is the major scale.

What Makes a Scale Major?

There is an easy way to determine which notes go into a major scale, and if you can memorize this rule, you’ll be able to figure out any major scale based on these two principles:

Once you’ve mastered many of the major scales and have advanced into an intermediate level player, you can delve into other types of scales such as the natural minor. Each type of scale has its own set of principles that determine which notes are used in the scale.

How to Play The G Major Scale on a Violin

The G Major Scale is the easiest scale to learn for beginners, so let’s start there.

Follow the principles above and identify your fingers with these numbers:

For the G major scale, use the following finger pattern:

G string: 2 and 3 touching (half steps) with all other fingers spaced apart (whole steps). 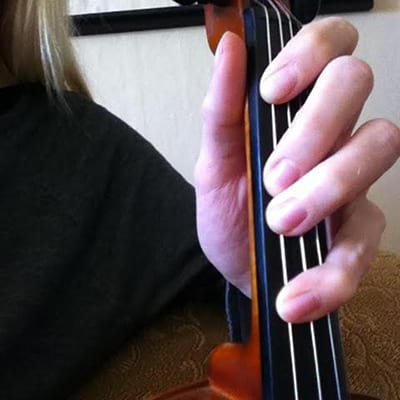 D string: 2 and 3 touching (half step) with all other fingers spaced apart (whole steps) 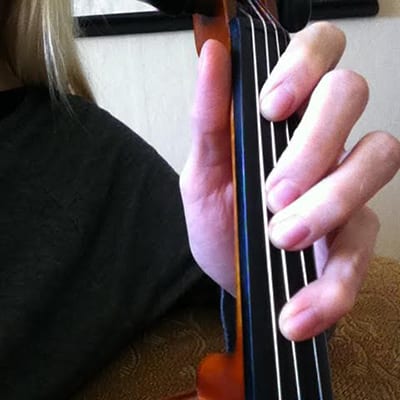 If you want to go into a two-octave scale and make the exercise a little longer and more challenging (highly recommended), allow the scale to span from the lowest G (Open G string) to the next G (3rd finger on the D string), and then expand and play all the notes leading up to the next G (second finger on the E string). This makes the scale twice as long.

Start over with the counting of the third and seventh notes, and continue the following finger pattern:

A string: 1 and 2 touching (half step) with all other fingers spaced apart (whole steps). 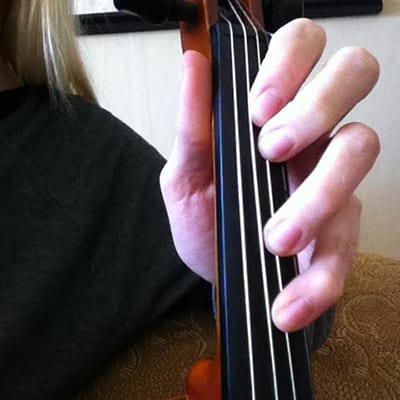 E string: 1 and 2 touching (half step) with all other fingers spaced apart (whole steps). 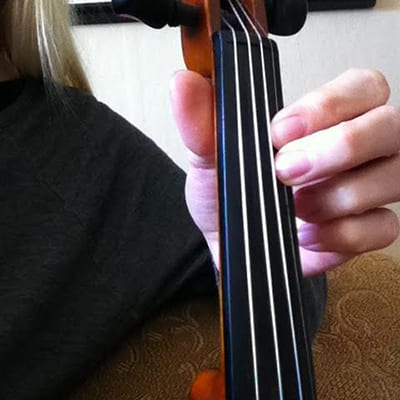 Here is a helpful warm-up routine that uses  the two-octave G major scale you just learned. Practice this routine to turn on your musical mind, get your fingers moving, and get  your bow arm flowing before each practice session. This warm up will also help you focus on your intonation and form,  and will explore different areas of the bow.

Follow the outline below as you play your two-octave G major scale:

This video will walk you through this violin scale warm up. Once you get comfortable with the warm up, try playing along with me in the video.

Take some time to grasp the section of the warm up leading up to the eighth notes. Depending on how long you’ve been playing violin, you may need to practice it for a few weeks.

Once you’re ready, try playing along with the 16th-note routine outlined in this video:

Now that you’ve learned the G scale and have an excellent warm up routine to go with it, take some time to get comfortable: practice and perfect it! For the next few weeks, play through your warm-up exercise each time you practice.

Learn to play this warm-up proficiently (all notes in tune and you can work smoothly and seamlessly from half notes to 16th notes) before you move on to another scale.

Work your way up gradually and play through your eighth notes and 16th notes slowly, until you can add speed without taking away from the overall quality of your sound and intonation. When you first start learning the scale, you may need to work through the warm up multiple times during your practice sessions.

Once you’ve mastered the two-octave G major scale, try moving on to the A major, the D major, and the C major. Using the scales as your cornerstone, you will become familiar with the different keys and will be able to approach songs and pieces of music with confidence and ease.