Every language has its own intricacies that take time and practice to master. In this article, we’ll discuss the distinction between the formal and informal use of the word ‘you’ in Spanish.

But first, here’s a quick summary of the difference between tú and usted.

Usted vs. Tú – What’s the Difference?

Tú in Spanish is ‘you’ in English — but what about usted in English? In English, there’s not a great translation for usted. So what does usted mean in Spanish?

In English, when we want to convey respect to someone, we use formal and polite language, such as ‘sir’ and ‘madam,’ and refer to people in authority positions with their titles, such as ‘doctor,’ or ‘professor,’ followed by their last name (e.g. Dr. Smith).

Spanish-speakers adhere to similar parameters when speaking to members of status or authority, but there’s also another common way to convey respect without calling someone by their professional titles. This is what usted in Spanish is all about.

When to Use Usted

Spanish is a language that highly values communicating respect and deferring to authority, therefore it makes a distinction that does not exist in English. Spanish-speakers use another word, usted, instead of tú, to address people of status or authority, the elderly, sometimes someone older than you, and often someone you just met, in order to convey respect to them. In romantic Spanish movies and novels, lovers will always refer to each other using usted to convey respect and appreciation.

Usted vs. Tú in the Real World

As your Spanish improves and you speak to people of all the different 24 Latin American countries, you’ll see that the use of usted varies considerably, not only from country to country, but from region to region within the same country.

By tuning in and observing each relationship, you can be more informed about whether to use tú or usted. As you travel to destinations that speak Spanish, you’ll see the practical uses of these formalities yourself. When I lived in Costa Rica, I was surprised to notice that friends often refer to each other using usted, even if they have a very close and informal relationship.

I know many people who always address their parents using usted. This often signifies a more formal relationship between parent and child. That said, this also widely varies. For example, my ex-girlfriend was very close to her mother and spoke to her using tú, always. In fact, her mother told me that she would be offended if her daughter spoke to her using usted, because it would make her feel not only old, but also distant to her daughter. On the other hand, many other Spanish-speaking mothers would invariably feel offended by their son or daughter if they did not address them in usted.

Another caveat is that in most of Central America and South America, Spanish-speakers use vos instead of tú, but this doesn’t matter as much, as they will always understand you in tú. A Spanish tutor can help you learn more about vos if you are interested.

Got it? Here’s a handy graphic to reference: 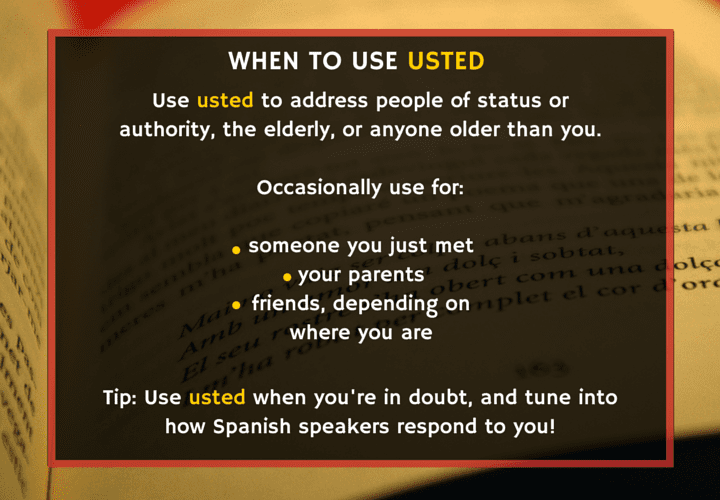 The good news is that Spanish-speakers will be so happy to hear you speak Spanish that they most likely won’t be offended if you fail to use the more appropriate one. The key here is not to worry much about it, as this can interrupt you from practicing. My best tip? Use usted in Spanish when you’re in doubt, and tune into how Spanish speakers respond to you! As always, a Spanish tutor can help you if you’re confused!

Post Author: Jason N.
Jason N. tutors in English and Spanish in Athens, GA. He majored in Spanish at UC Davis, lived in Mexico for 3 years where he completed a Master’s degree in Counseling, and studied Spanish Literature and Psychology at the University of Costa Rica. Learn more about Jason here!