The past tense Spanish conjugation is necessary for describing situations and events that have already happened. Preterite endings are one of the basic building blocks of Spanish that are fundamental to any conversation. Once you learn these conjugations, you’ll be able to talk about so much more with friends and family!

What Are the 5 Past Tenses in Spanish? 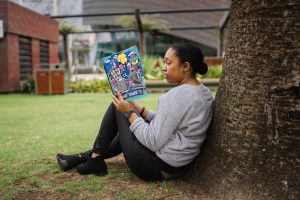 Depending on who you talk to and how much experience each Spanish speaker has, there are anywhere between three and five different past tenses in Spanish.

The big ones include:

Here’s a video to tell you a bit more about some Spanish verbs:

Why Learn the Preterite Endings? 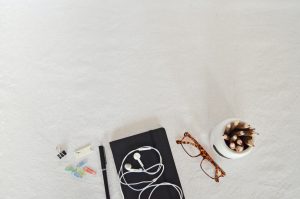 If you’ve learned the basics of verb conjugation in the present tense, you’ve probably realized how limited you are without knowing the past tense versions of the verbs. Trying to describe only what’s happening in the immediate present, without being able to explain what happened even five seconds ago, is nearly impossible! This reveals how important it is to learn the preterite tense or the Spanish past tense conjugations.

In this post, we’re going to take your verb conjugation skills to a higher level. This involves learning Spanish preterite conjugations so that you aren’t restricted to only describing actions that are happening in the here-and-now.

When is Preterite Spanish Past Tense Conjugation Necessary? 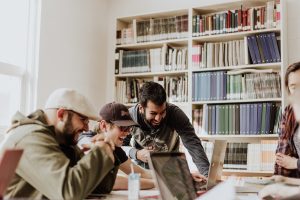 The preterite tense is used to talk about actions that were completed in the past. Usually, it is meant to discuss specific beginnings and ends as well as things that took place on specific dates or days or at specific times.

This Spanish verb tense can also be used to discuss past events that took place in a sequence, such as when you are listing various items that occurred in the past.

How to Conjugate Past Tense in Spanish 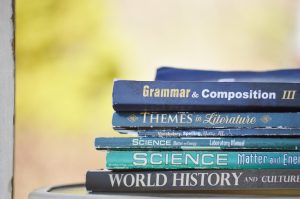 The Spanish preterite tense is a way to express the past, and it breaks down verbs into five different endings. Keep reading to learn how to change a verb into its past tense form by using preterite endings.

Here is an example using the Spanish verb mirar (to watch). First, shave off the -ar ending. Then…

SEE ALSO: 46 Spanish Adjectives to Describe All Your Friends

Now let’s use comer (to eat), as an example. First, shave off the -er ending. Next…

How to Conjugate -IR Verbs in the Spanish Preterite

Ready for some Spanish preterite practice? Fill out the following Spanish conjugation chart past tense:

There are 12 core verbs in Spanish that have irregular past tense conjugations in the preterite tense. Yes, that means that you’ll need to commit each irregular verb conjugation to memory. Fortunately, their main endings are similar to what we’ve already learned in this post: –é, –iste, -ó, –imos, –isteis, –ieron/*eron. Below are the 12 verbs, also known as “the dirty dozen.” 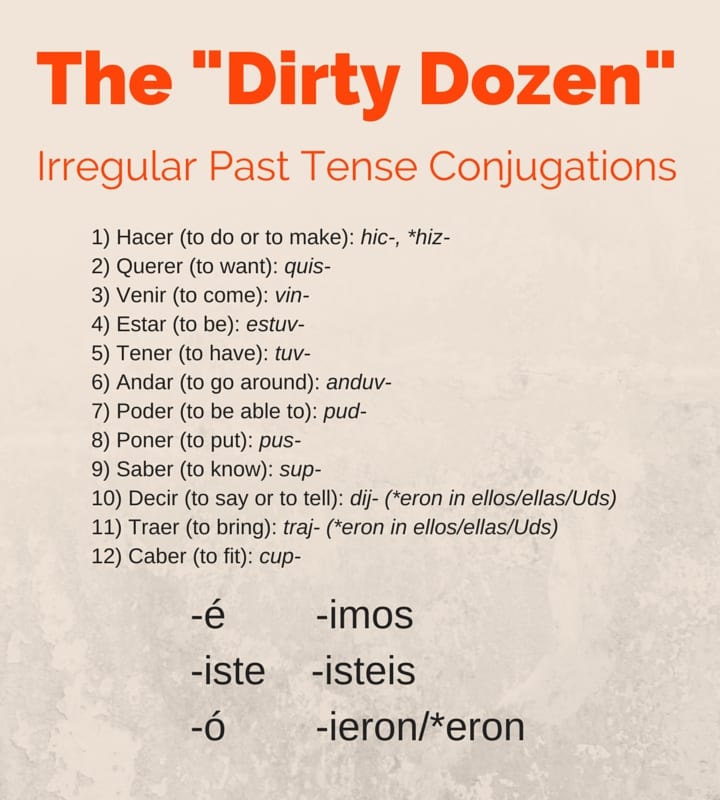 Let’s conjugate estar as an example: 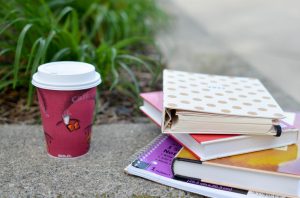 Finally, don’t forget the accent marks! Accent marks, also known as tildes in Spanish, are necessary to distinguish between two words with the same letters. In English, we tend not to care about these, but learning Spanish past tense conjugation can be more challenging if you don’t pay attention to the details.

Now that you know the preterite tense in Spanish, you’re one step closer to becoming fluent. With both present and past tense verb conjugations under your belt, the future tense will be no problem! You can return to this guide whenever you need a refresher on Spanish past tense conjugations and preterite endings.

While resources such as this one are important for getting down the nuts and bolts of Spanish, working with a Spanish tutor is a sure-fire way to maximize learning conjugating including the er ir preterite endings. Outside of total immersion in a Spanish-speaking country, personalized lessons are the best way to get the conversational practice you need to become fluent.

Online Spanish classes are also a great way to work on your skills and make new friends. The convenience of an online classroom allows you to build communication skills, no matter where you are! Before you know it, you’ll be using verbs with preterite endings in everyday Spanish conversations.

Remember, the formula for learning a language is simple: The more you speak, study, and listen to Spanish, the better your conversational skills will become. Buena suerte!

Post Author: Jason N.
Jason N. tutors in English and Spanish in Fairfax, CA. He majored in Spanish at UC Davis, lived in Mexico for 3 years where he completed a Master’s degree in Counseling, and studied Spanish Literature and Psychology at the University of Costa Rica. Learn more about Jason here!