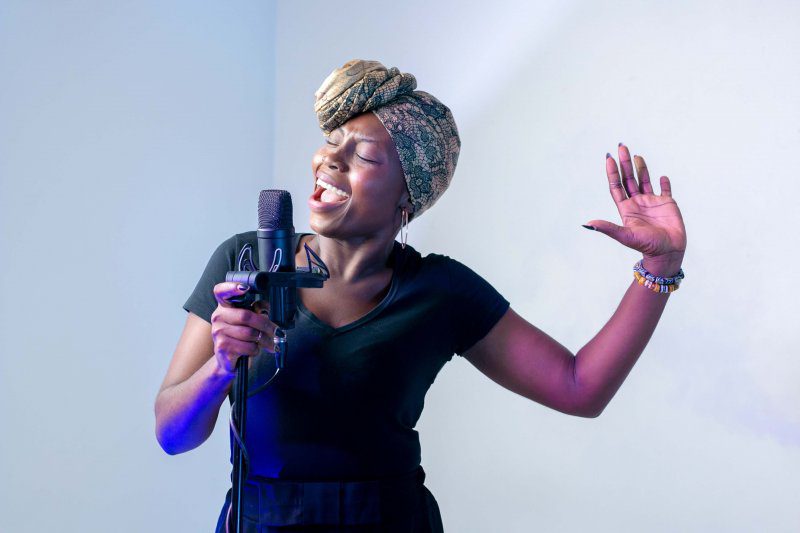 If you’ve ever felt confused by unfamiliar singing terms, you’re not alone. As with every specialized field, vocal professionals tend to throw around a lot of jargon or terminology that many people aren’t familiar with.

If you’re interested in expanding your musical skills, this singing glossary will help you better understand music instructions and words used within singing communities. Let’s get started!

You’ll find some of the most common singing vocabulary terms in this alphabetized list, including choir-related words and their definitions.

1. A Cappella: The meaning “of choir” in Italian. This term has been adopted to refer to singing without accompaniment.

2. Alto: A lower female voice within the choral setting.

3. Articulators: The body parts used to form words; usually refers to the lips, teeth, and tip of the tongue.

4. Aspirate: A diction term referring to a sound that produces an audible puff of air, such as the letter P in English.

5. Baritone: A male voice type between tenor and bass.

7. Breathy: A vocal sound that is not clear, while instead sounding airy and fuzzy. A breathy sound can be caused by many factors, including inadequate breath support.

8. Chest voice: The lower vocal register in which most people talk; resonates in the chest.

12. Covering: A vocal technique wherein the singer rounds the lips slightly when singing high notes to achieve a specific sound.

13. Dental: A diction technique referring to sounds that occur when the tongue is right behind the top front teeth. The Italian or Spanish D sound is a good example.

14. Diaphragm: The large muscle of respiration that lies beneath the lungs, which flattens and lowers during inhalation. This is one of the most common singing terms used in lessons or classes when discussing proper breathing techniques.

15. Diction: The way components of words, including consonants and vowels, are formed and pronounced. For classical singers, this generally includes the study of foreign language diction.

16. Diphthong: A diction term referring to the phenomenon of one vowel gradually changing into another vowel, creating two vowels within a syllable. This happens a lot in English (e.g. in the word “ray”) but happens less in other languages.

18. Extended technique: Any vocal technique outside of what is normally and classically taught; this includes whistle tone, inhaled phonation, throat singing, and many other techniques.

20. Flat: When a pitch is slightly lower than desired.

22. Glottal fry: The croaky, low register that some people speak in due to lack of breath support; it often occurs at the ends of sentences.

23. Glottal stop: The sound created when a person presses their vocal folds together before beginning a vocal sound. Manifested at the beginning of many words that start with vowels in English, including “umbrella.”

24. Head voice: The upper vocal register in which women and countertenors primarily sing in classical music.

25. Intercostals: The muscles in between the rib cage that lift the ribs out and up during breathing.

26. Larynx: The structure in the throat that contains the vocal folds.

27. Low breath: The use of the diaphragm and intercostals to breathe without moving the shoulders, neck, or upper chest. This type of breathing is desirable in singing.

29. Messa di voce: A dynamic technique involving starting a note with a crescendo (quiet to loud) followed by a decrescendo (loud to quiet).

New to singing? Learn some tips for beginners here:

31. Onset: The beginning of the vocal sound.

32. Passaggio: An Italian term translating to “passage,” this refers to transitional areas in the voice where the singer must take extra care to sing well. These occur in different spots according to the individual and voice type.

33. Phonation: The creation of a vocal sound.

34. Registers: Parts of the voice that are differentiated by vocal quality, and sometimes range, such as chest voice, head voice, and falsetto – each of these singing terms can be found in this singing glossary.

35. Resonance: This is another sound quality term, such as “tone” that refers specifically to how round or warm the sound is, which has more to do with overtones. It can also refer to the way a sound interacts with a room, such as a cathedral.

36. Sharp: When a pitch is slightly higher than desired.

37. Soft palate: The soft muscular structure at the back of the mouth that, when lifted, separates the nasal cavity from the rest of the respiratory system and therefore stops singers from singing out of their noses.

39. Squillo: Another sound quality term, this refers to the edgy, clear tone some singers have, particularly in their upper registers.

42. Tone: The quality of a voice; usually described with adjectives such as “raspy” and “clear.”

43. Timbre: Similar to tone, this refers to the quality of a vocal sound.

44. Trill: A technique in which a singer quickly moves between two adjacent notes.

45. Unvoiced: A diction term referring to consonants that don’t involve vocal sound, such as S and T.

46. Vibrato: The natural oscillation between pitches (even when singing a held note) present in many singing voices.

47. Vocal cords/vocal folds: These mucus membrane cords, nestled in the larynx, vibrate together when air passes between them, producing vocal sounds.

48. Voiced: The opposite of “unvoiced,” this is a diction term referring to consonants that require vocal sound, such as B and Z.

49. Whistle tone: The highest vocal register, located above head voice and made famous by Mariah Carey.

50. Wobble: A phenomenon that occurs when the distance between the two pitches present in vibrato becomes too wide, causing an unstable sound.

The more you expose yourself to the world of singing, the more you’ll catch on to singing terms and definitions. And, of course, old-school flashcards are always a go-to strategy for learning new words!

Consider taking lessons for more help with mastering this singing glossary and other skills to become an outstanding singer. Working with a professional music teacher is always a great idea because it can help you get even more comfortable with all this new vocabulary and master your singing goals.

If you’d like to learn more, sign up for singing lessons or try some free online classes today!

Post Author: Elaina R. Elaina is a singer and voice teacher from Fort Wayne, IN, where she teaches at the Purdue School of Music and in her private studio. She received her Master of Music from the University of Michigan. Learn more about Elaina here!