“Art is the closest we can come to understanding how a stranger really feels.” – Roger Ebert

When it comes to movies about musicians, we generally see the same pattern in each story: an unknown artist struggles with their personal demons as they try to make a name for themselves, and they ultimately reach stardom at the expense of their relationships or mental health.

While most of these movies fit a cookie-cutter pattern, they also showcase the unique skills and tactics that each artist uses to become successful.

Below is a list of 10 movies about musicians that include a brief summary of each film, as well as each artists’ special formula for rising to the top. These movies were selected based on Rotten Tomatoes’ Audience Score, meaning we picked the top 10 movies based on tens of thousands of audience votes.

Are you ready to take an inside look? Let’s check them out!

“Walk the Line” is the story of Johnny Cash’s rise to fame. It gives a glimpse of both the triumphs and heartaches that come from striving for fame. Johnny had a troubled relationship with his father, and playing music was his way of finding solace. Unfortunately, he turned to drugs for the same reason.

The movie demonstrates how Johnny went from one failed relationship to another, eventually conquering his addiction to drugs, and ultimately finding a way to use his music to inspire and bless people (namely prisoners) who related to him. 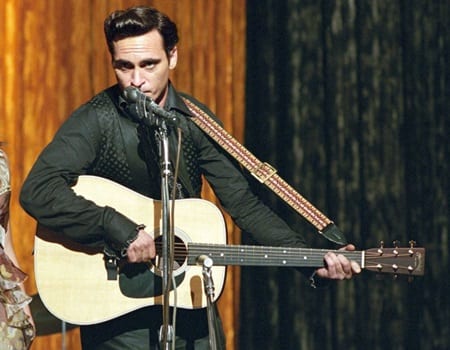 As demonstrated in the film, Johnny Cash learned how to make the I, IV, V pattern work for him. His simple chord structure, under well-crafted melodies, put his songs in the minds of listeners for generations to come. While Johnny Cash songs aren’t structurally complex, the melodies are catchy and reminiscent of older folk idioms that continue to inspire and challenge players today.

Many movies discuss the dangers of using drugs to fuel creativity, and “Ray” is no exception. Jamie Foxx portrays the late, great Ray Charles in this biopic about his life. In the movie, we see Ray’s rise to fame and his struggle (and ultimate victory) over a heroin addiction. 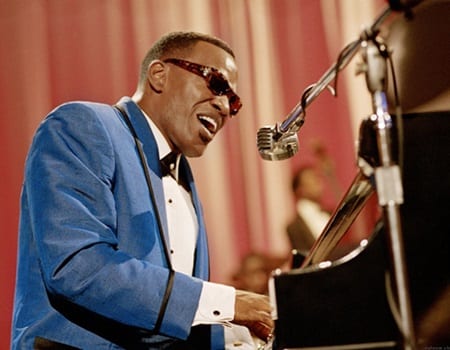 Foxx’s portrayal of Ray Charles is one of the most accurate depictions of a popular musician moviegoers will see. We see a great deal about the process of making a great recording, and how producing a good record is often a team effort.

Ray has a great band, awesome producers (like the legendary Ahmet Ertegun), and great backup singers (though they’re often at the center of many of his issues). Ray’s success shows us that it’s important to work well with others, and that serving the music should come before serving yourself.

“Love and Mercy” describes the life of Beach Boy bass player, songwriter, producer, and vocalist, Brian Wilson. The movie shows Brian slowly descend into madness during the recording of the “SMiLE” album.

He spent years in a drug-induced fog, until the controversial Dr. Eugene Landy helped “rescue” him from his addictions. But it really took Brian’s love for his wife, Melinda, to rescue him from the clutches of the overbearing Dr. Landy. 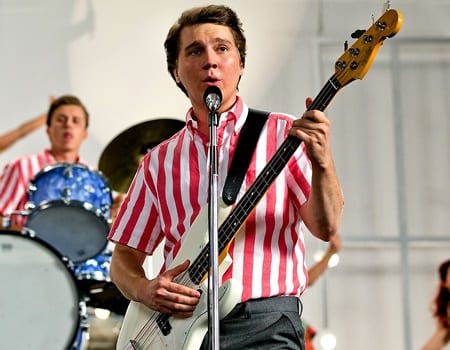 Surprise, surprise! This is a film that, yet again, shows the dangers of using drugs to self-medicate, and how they quickened Wilson’s mental descent. But this film also demonstrates true musical genius when it comes to the amazing melodies and harmonies that Wilson chooses to explore in his music.

The true nature of great melodies is demonstrated in the scenes that show Wilson composing. The movie also shows how some of Brian’s melodies are almost lost by the verbal abuse from his demanding father, Murray. Yet, the powerful melodies endure and inspire us today, which goes to show you that a great melody is practically immortal!

“Coal Miner’s Daughter” tells the story of country singer, Loretta Lynn, and her rise to stardom from the absolute depths of poverty. Her musical endeavors are supported by her husband, her children, and her manager, Norm Burley. Burley is shown throughout the movie tirelessly working to promote Lynn’s music. 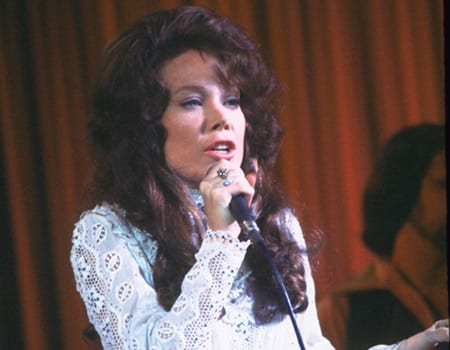 One of the key takeaways from this movie, aside from the tremendous amount of hard work that Loretta puts into her act, is the amount of effort her family and manager put into it as well. What we see as a successful “solo” act is actually the result of many people working together to bring her music to the world.

This is another important lesson that young musicians should know: No matter how good you are as a musician, you can’t get anywhere without the support of quality people. This movie teaches us that when you get to the top, be careful not to step on the people who helped you make it.

This movie is about the events that led to the classic Christian hymn, “Amazing Grace,” and the ending of slavery in England. The movie depicts the work of William Wilberforce, an attorney who strove to end the slave trade in England. One of Wilberforce’s friends and supporters is John Newton, former slave-trader turned churchman.

Newton inspires Wilberforce with courage and spiritual strength to stand up against an age-old tradition (slavery) that both men see as pure evil. Newton describes the events that caused him to have a religious conversion, which he sees as giving him a second chance in life. These events inspire the words to the beloved hymn, Amazing Grace. 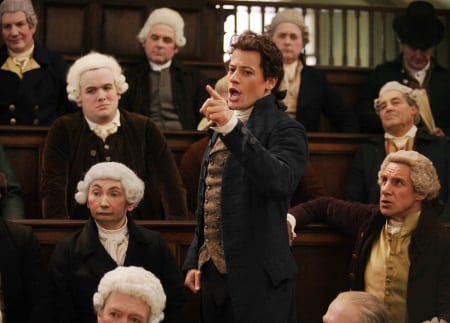 This movie teaches many great lessons that young musicians can learn from, but one that stands out is the power of a lyric. Amazing Grace’s lyrics show that faith and a new start can truly cause change in both individuals and society as a whole.

John Newton was a scoundrel, but after nearly dying at sea, he became a Christian. Instead of enslaving his fellow man, he spent the rest of his life working to end slavery. His powerful testimony has been passed down in the form of a hymn and has inspired people from all walks of life to continue to work towards helping people instead of harming them.

Amazing Grace shows the value of songwriting and how a truly inspiring song can continue to impact the lives of people for hundreds of years afterwards.

“The Glenn Miller Story” tells the story of big band era (1930s-1940s) band leader, Glenn Miller. Not only was Miller the leader of a famous band, most famous for the song “In the Mood,” but he also served in the Army Air Corps during WWII. His stint in the Air Corps was brief, however, when his plane disappeared over the English Channel in 1944. 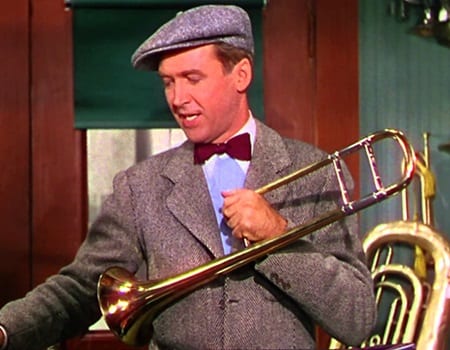 This movie shows a top notch musician (he played cornet, mandolin and trombone) and band leader who felt a higher calling than just entertainment. He chose to give up a lucrative career as a band leader, at the height of his fame, in order to help stand up against the tyranny of Nazi Germany. And though it ultimately cost him his life, he died for something he believed in, which is a rare thing in the music business these days.

The takeaway for modern musicians: use your music to accomplish great things, and not just to entertain for entertainment’s sake.

“La Bamba” is the story of Ritchie Valens, one of the first Hispanic rock stars in the world. The movie follows his rise to stardom, showcasing his rocky relationships with his family and his girlfriend, Donna. Valens’ career was tragically cut short because of a plane crash that also killed another musician on our list, Buddy Holly. 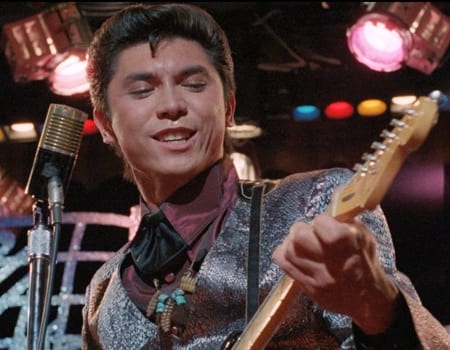 Ritchie Valens was one of the first rock musicians to combine traditional Mexican scales over top of rock rhythms and chord progressions. We see in this movie that talent took Valens a long way, along with his creation of a new genre that combined traditional rock with a new style.

La Bamba was a great song because it took the newly developed idiom of rock and slapped a folk tune and lyrics onto the new style. His style was certainly enduring — people love La Bamba even to this day!

“The Buddy Holly Story” tells the tale of early Rock n’ Roll guitar legend, Buddy Holly, and his band, the Crickets. In their brief career, they had hit after hit of great tunes that continue to influence musicians to this day. 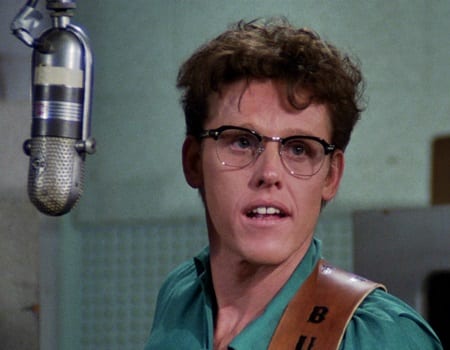 Buddy Holly is one of those musicians that, even if you’ve never heard of him, you’ve been influenced by him. Even though he died in the 1950s, musicians for decades to come were heavily influenced by his music (e.g. James Taylor, The Ramones, Don McLean, Tom Petty, the Cars, and many other famous musicians who were kids in the 50s and early 60s).

Buddy Holly’s music shows that a great lyric, melody, and chord progression will last forever. Not only were his melodies well-crafted and infectious, but his punctuated singing style was unique at the time and set him apart from other singers.

“Bound for Glory” describes the events surrounding the life and times of folk legend, Woody Guthrie. When the harrowing Dust Bowl hit Oklahoma in the 1930s, Guthrie left his wife to migrate to Southern California. From there, his music career began. 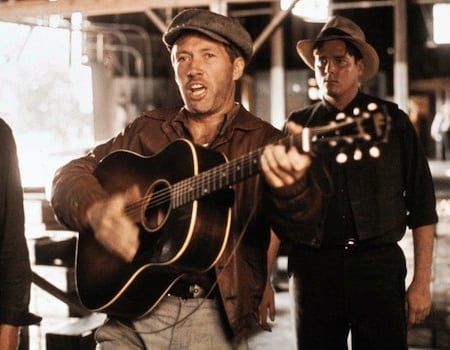 Guthrie was one of the most influential figures surrounding the folk movement of the 1960s. Even if you haven’t heard of him, you’ve undoubtedly heard of Bob Dylan, Joan Baez, Peter, Paul and Mary, or Simon and Garfunkel; they were all heavily influenced by Woody Guthrie.

Guthrie’s simple melodies, such as “This Land Is Your Land,” captured a generation of singers who loved to perform his tunes. His rambling lifestyle gave him a great amount of material to write about, as well as reflect on a tumultuous period of American History, prior to World War II. Woody Guthrie’s life and music demonstrates the importance of the songwriter as a historical record-keeper.

“The Benny Goodman Story” is not supposed to be the most accurate version of the big band leader’s life, but it does capture the great music that Benny Goodman produced. The actual details seemed to have been adjusted by Goodman, who was still alive while the movie was being made (and who played most of the clarinet solos that were recorded for the movie).

Most of the movie centers around his romance with his wife, Alice Hammond, sister of John Hammond, the guy who discovered Bob Dylan years later. 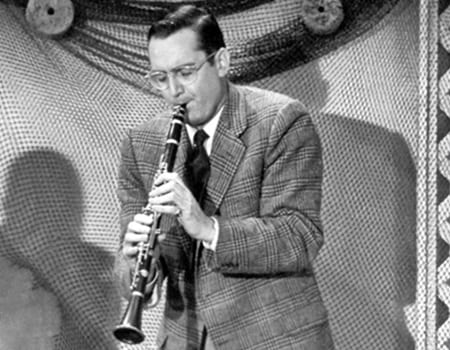 This movie is inspirational to young musicians because it shows that you should continue to strive to develop your art and bring your gift to the world, despite the obstacles that might get in your way. Benny Goodman was wise in his choice of side musicians — one of his sidemen was the great jazz drummer, Gene Krupa. Picking great musicians to work with will challenge any musician to strive for greatness.

Here are some other movies about musicians that are worth checking out too. Click them to watch the trailers:

What are your favorite movies about musicians? Comment below with your thoughts!

Post Author: Willy M.
Willy M. teaches guitar, ukulele, and mandolin lessons in Winston Salem, NC. He’s the author of the Dead Man’s Tuning series of mandolin songbooks, and is a former member of the American Federation of Musicians. Willy has been teaching for 20 years, and his students have ranged in age from young children to folks in their 80s. Learn more about Willy here!