What is Japanese writing called? Romaji simply means “Roman characters.” You will typically use romaji when you type out Japanese sentences using a keyboard.

“Romaji is the representation of Japanese sounds using the western, 26-letter alphabet,” says Donald Ash, creator of TheJapanGuy.com. “Romaji puts Japanese into a format that most Westerners can read and understand.”

Although romaji is one way to write Japanese syllables, it’s not a completely functional system.

“First of all, there are ways in which the Japanese sound system is different from English,” says Tofugu writer Linda Lombardi. “Second, there’s more than one way to write even some English sounds in English.”

Romaji isn’t used as often as kanji, katakana, and hiragana, but it’s still a good idea to be familiar with it when you’re learning to speak Japanese.

How to Use Romaji for Beginners

Let’s take a look at romaji, and the the standard Japanese spelling syllables.

Hiragana is the basic writing system that is commonly used in Japan. Hiragana uses 46 letters, so there are 46 romaji variations to represent all hiragana. (See the chart below, read from right to left). 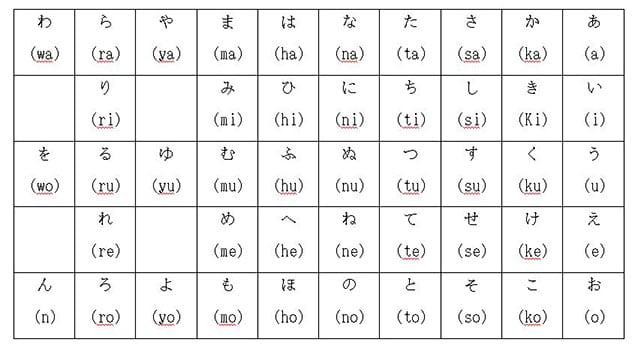 Japanese syllables, however, have more variations than 46 because hiragana letters can be combined to describe variations of sounds.

Japanese syllables consist of dakuon (impure sounds) and han-dakuon (half-impure sounds). Dakuon sounds occur in the  か (ka), さ (sa), た (ta), and は (ha) rows. The consonants for each row k, s, t, and h should be changed to: g, z, d, and b. See the chart below for examples.

Notice that “zi,” and “zu” are used twice for different letters.

Han-dakuon only occur on the “h” consonant row, which changes the sound to a “p.” In Japanese writing, dakuon is described by simply adding two dots right next to the original letters. Han-dakuon uses a small circle instead of dots.

Here are some extra tips to keep in mind about romaji:

Yôon (twisted sound) is formed by combining hiragana. You have already been introduced to the  や (ya), ゆ (yu), and よ (yo) letters in chart 1.

When these three letters follow other letters, [except for the “あ” vowel row, or わ (wa), を (wo), and ん (n)], it’s going to create distinctively different sounds. This conjugation happens to dakuon and han-dakuon sounds as well. See the chart below:

When や, ゆ, and よ are conjugated with other letters, the size of those three letters has to be smaller. If you write the letters in the same size, it’s not considered a conjugation. It’s just two syllables happening successively.

For example, “きや” is read and written as “kiya” instead of “kya” – one syllable sound. ちゃや which means “tea shop,” is written as “tyaya” in romaji.

Tyôon means “long sound.” It often happens in Japanese when two vowels are written successively. Since all Japanese syllables have a vowel, the vowel in the first syllable can be connected with another vowel directly. When this happens, it creates the feeling of a longer sound.

Now let’s focus on the first two syllables of the word, ちょう. The vowel “o” in “tyo” is connected with the vowel “u.” This “ou” sound is considered a “longer sound.”

In official romaji writing, this is supposed to be written so as “tyôu” with a circumflex (a mark placed over a vowel to indicate a contraction or change in length or tone). This longer sound is a very important part of Japanese pronunciation.

You can see this in two common Japanese last names: おおの (Ôno) and おの (ono). These two names are similar but distinctively different.

When you see two Os, you may be tempted to say “oo” as in the word “ooze.” Using a circumflex can help to eliminate this confusion.

Of course, there are exceptions to these rules. For example, when the vowels “e” and “i” are combined, you can’t use a circumflex. So romaji writing for the term “movie,” えいが, should be written as “eiga.” Just write each syllable rather than “êga,” even though this is still one of the longer sounds.

On the other hand, if two Es are combined, you still have to follow the circumflex rule, even though the pronunciation for “ei” and “ee” are the same. This might sound confusing but with enough practice, anyone can master it!

Sokuon means urging sound. I’d describe this as a skipping or jumping sound. These kinds of words are written with a small “tu” in hiragana (いった (went) and やった (did).

Just like yôon, there is a smaller letter in between. In romaji, you should write the two examples as “itta” and “yatta.”

Most of time, romaji writing works when you type on a keyboard. It doesn’t always work perfectly, however – describing Japanese syllables with the alphabet sometimes requires adjustments.

For instance, じ、ず、and ぢ、づ are the same in romaji: “zi, zu.” When you need to type ぢ and づ on the keyboard, you can actually use “di” and “du” because ぢ and づ belong to the だ (da) row in the first chart we shared.

New Japanese syllables have also been added since foreign words and new terms were imported. These new syllables combine vowels and consonants. These syllables are still controversial, and most of them are not even officially acknowledged, even though you can see them everywhere in Japan.

As you can see, romaji is a very unique component of the Japanese language. If you’re having trouble understanding these concepts, seek the help of a Japanese teacher who can break down kanji to romaji into small segments to make it easier for you. Good luck and enjoy learning Japanese!

Post Author: Kaoru N.
Kaoru N. teaches Japanese and guitar lessons in Brighton, MA. Originally from Tokyo, he graduated from Berklee College of Music with a dual major and is available for local or online lessons. Learn more about Kaoru here!