When learning to speak Japanese, you’ll come across suffixes used to address people called “honorifics.” Japanese honorifics are an important way to convey respect, formality, and friendship to those you interact with.

Both formal and informal honorifics are common in Japanese, which is why every speaker needs to get the basic suffixes down. To an English speaker, the concept of honorifics may seem new, but the fact is, we already use terms, such as Miss, Mr., and Dr. as prefixes.

But instead of being prefixes, Japanese honorifics are simply a collection of suffixes that get tacked onto the end of names, titles, and other labels. There are dozens of Japanese honorifics, but since not all of them are common, we’re going to focus on the honorifics that you’re more likely to use.

By choosing the right Japanese name suffixes when you speak to coworkers, friends, or family, you can make your phrases sound much more natural (and of course, avoid offending anyone).

If you have some experience with Japanese, you may have noticed that lots of Japanese titles start with “o.” An “o” at the beginning of a Japanese title is usually an honorific prefix.

Removing the “o” makes the title more colloquial, and in some cases, rude.

For example, the word for mother, with Japanese honorifics, is oka-san. Without the prefix, it becomes ka-san, which is more like “mom” than “mother.”

Keep this in mind as you learn about Japanese honorific suffixes.

What is the Japanese sama meaning in English?

The most formal honorific suffix is -sama, and it’s used for God (kami-sama) and royalty (ohime-sama).

You can also use -sama to flatter people or to be sarcastic. For instance, if you attach the suffix to the slang male term for “I” (ore) to create ore-sama, this basically means “my royal self.”

Although these formal Japanese honorifics are not often used in conversation (except for sarcasm’s sake), you will commonly hear it in movies, shows, and song lyrics.

What does san mean in Japanese?

The most common formal honorific is -san, and it translates (approximately) to Ms. and Mr..

The Japanese san suffix is used among peers and in public settings, like offices or schools (unlike in the United States, coworkers and fellow students usually refer to each other formally). It’s also used for acquaintances.

When in doubt, use the Japanese san suffix. It’s the safest way to address someone with respect, without going overboard.

This is an endearing female honorific. While it’s most commonly used for children, it’s also used fairly widely among family and friends.

All of the women in my family refer to each other as –chan, even my grandma (oba-chan).

You can also use –chan for males; one of my second cousins, Tatsumi, has always been Tat-chan instead of Tat-kun, probably because it just sounds better.

This suffix reminds me of the diminutive –chen in German; lieb means love, but liebchen, which technically means little love, actually means darling.

You can use -chan the same way, to add a sense of cuteness to names and titles.

This is the male equivalent of –chan; it’s used for kids and between peers and friends.

While all of the women in my family refer to each other as –chan, we don’t usually use the –kun suffix (or any suffix at all) for grown men in the family. It could be interpreted as a little too “cutesy.”

This suffix is more cutesy than –chan and –kun.

It’s OK to call an adult male –kun, but it’s definitely not OK to call him –bō, which is reserved for little boys. It’s a derivative of obbochama, which means something like “little lord.”

In general, the Japanese refer to their older family members with honorifics instead of names. It’s very similar to how, in the U.S., we refer to older individuals with titles (Mom, Dad, Grandma), and those younger than us by name.

Nowadays, it’s possible to refer to elders with informal title prefixes and suffixes without being rude. I’ve included acceptable iterations in the chart below. There are other titles, but it’s best to avoid them if you don’t want to accidentally call your Grandpa something like “Pops.” 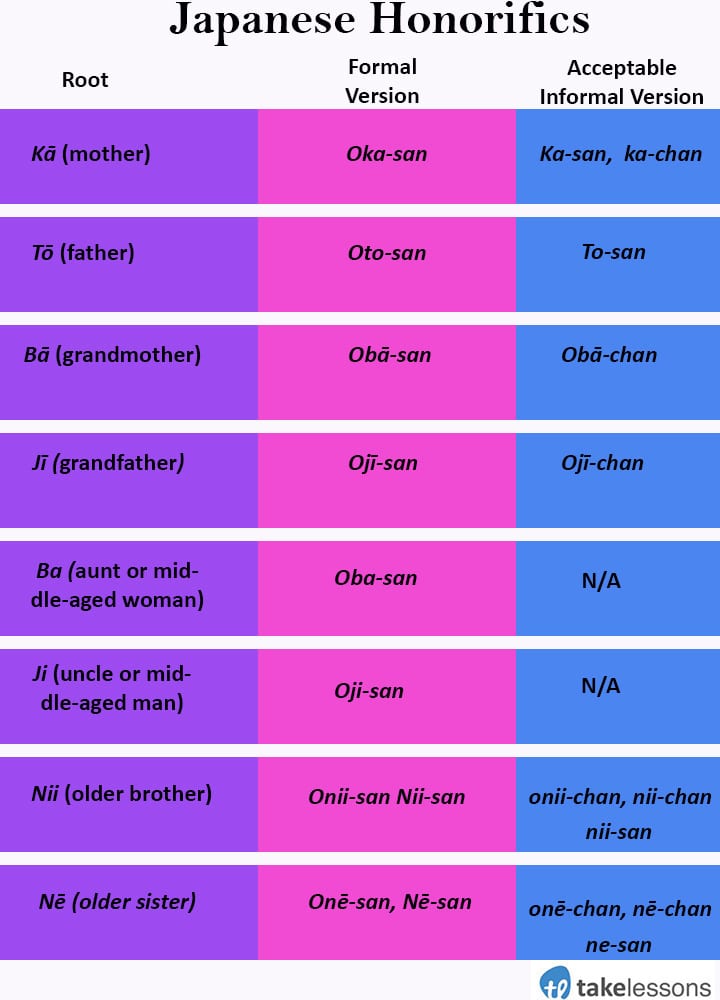 A few Japanese honorifics can be used as stand-alone titles as well as suffixes. Here are two examples.

There are also occupation-related Japanese honorifics, which are based on the job title of a person. These can relate to the trade someone is in or their rank within a given profession. For example, a master carpenter’s suffix could be –tōryō, and a company president’s could be –shachō. Within one’s own company, these Japanese honorifics can become titles in themselves, such as shachō-san.

There are several instances when you should not use Japanese honorifics. These include when talking about yourself. You would not give yourself a honorific suffix when referring to yourself, especially when talking to others or introducing yourself to someone else.

You also would not use Japanese honorifics if you were talking to your parents or grandparents or someone considered a close friend. These people are considered part of your family or inner circle and it is not required to use these terms when speaking with them.

There’s no doubt that it takes sufficient time and practice to learn how to speak Japanese. This study time pays off in a major way, as you deepen your connection with the beautiful culture of Japan and make more friends who speak the language. Outside of total immersion, the best way to maximize your Japanese language potential is through private lessons or group classes.

Whether you’re looking to master Japanese honorifics or any of the other elements of the language, you can find helpful group Japanese classes for free at TakeLessons Live. These classes help you work on your speaking skills in a fun and accessible way!

A classic saying for Nihongo beginners goes like this: “When in doubt, stick with the Japanese san suffix, and call your teacher ‘Sensei.’” This rule should carry you along until you’ve got the common Japanese honorifics down!