Verbs and nouns are vital to form a sentence, but if you want to add some color, you also need adjectives. Here, Ann Arbor, MI teacher Elaina R. shows you how to use Japanese adjectives…

The stove is hot.

There are only two main types of Japanese adjectives, and they act very similar to English adjectives.

These adjectives end with (you guessed it) the letter “i”.

You can use them exactly like adjectives in English:

“Na” – adjectives end with pretty much anything except for “i,” for example, hen is a Japanese adjective that means “weird”.

How are “na” – adjectives constructed differently? You have to add – na after the adjective to connect it to the rest of the sentence:

Using adjectives in present tense is very easy in Japanese. For exclamations, you can just use the simple conjugations that we learned above.

Sometimes, just one word will suffice:

When you’re not so overwhelmed with emotion that you need exclamations, use a normal sentence.

All you have to do is tack the right ending onto the noun.

Predicative adjectives go at the end of the sentence:

Creating a sentence like this in Japanese is pretty easy. All you have to do is add the verb “is,” which in this case is “ga” (が）.

Sorry, Not An Adjective

Are you wondering how to say “I’m hungry” or “I’m thirsty”? In Japanese, we say “my stomach is empty” rather than “I’m hungry.” There’s no single adjective that means “hungry,” and the same goes for “thirsty.”

Remember, too, that Japanese sentences don’t require a subject. So the same sentence can mean a lot of different things, which is very convenient for Japanese language learners.

Adjectives lend lots of color and personality to speech. By using adjectives in Japanese, you can take your language skills to the next level.

Memorize some common adjectives and ask your Japanese teacher for extra help, if you need it. Before you know it, you’ll be an expert on Japanese adjectives! 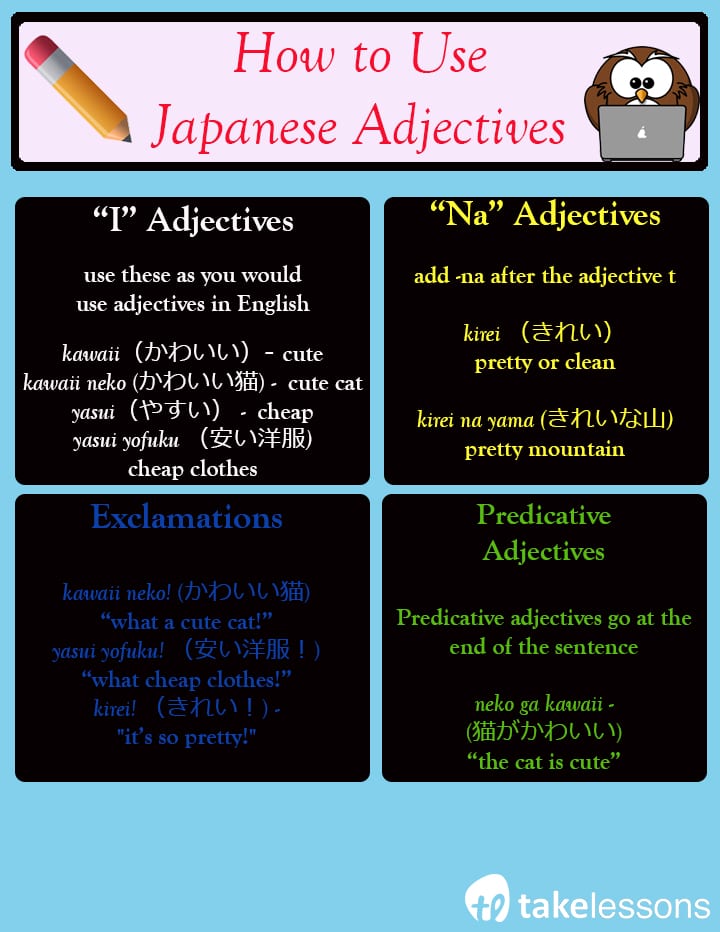