Learning Italian can be difficult, not to mention overwhelming for new students. Many students are afraid of tackling Italian grammar, as it can be complex and confusing at first.

If you take the time to learn Italian grammar, however, you’re much more likely to understand what you’re actually saying, hearing, reading, and writing.

Below, we break down the five most difficult Italian grammar rules to make it easier for you to understand.

If the noun ends in -i that means it’s masculine, but plural and nouns ending in -e are feminine, but plural. See examples below.

Knowing how to create singular and plural nouns can be difficult. While there are a few tricks to remembering the rules, it’s really all about memorizing the endings. See examples below.

Nouns ending in singular -o switch to plural -i

Nouns ending in singular -a switch to plural -e

Nouns ending in singular -e switch to -i

There are two main forms of the definite article in the singular, il (masculine) and la (feminine) and two alternate forms. l’ for any noun starting with a vowel, and –lo, for any masculine noun starting with s- plus a consonant, p-s, or -z. See examples below:

Masculine noun starting with a vowel

Feminine noun starting with a vowel

Masculine noun starting with a -s plus a consonant

I is used to describe plural masculine

4. Indefinite Articles “A, An” Describing Nouns

Masculine nouns use “Un” before a vowel or consonant.

Feminine nouns use “Una” before consonant.

Feminine nouns use “Un” before vowel

5. Italian Pronouns to Use When Describing People 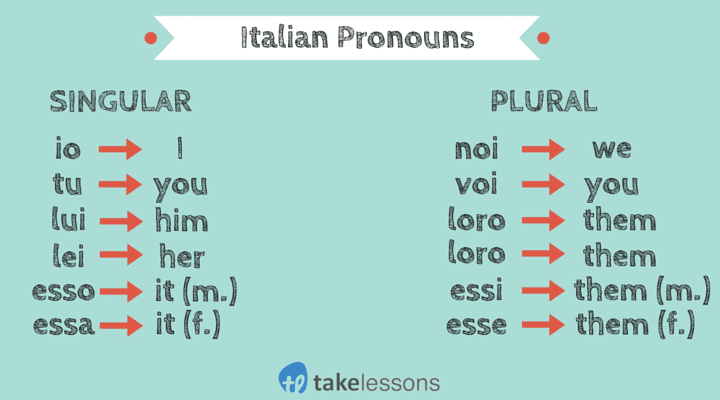 To gain a better understanding of the Italian language, it’s important to master these five grammar rules. Use flash cards, write them down, put them in a song, use visuals, anything that will help you memorize them.

Here are some additional Italian grammar articles that can help supplement your studies:

Post Author: Liz T.
Liz T. teaches singing, acting, music and Italian lessons in Brooklyn, NY. She is a graduate of the Berklee College of Music with a B.M. in vocal performance and has a graduate certificate in arts administration from New York University. Learn more about Liz here!

5 thoughts on “5 Most Difficult Italian Grammar Rules Made Simple”