When it comes to building a solid Italian grammar foundation, gender and number are two very important concepts one must learn. Unfortunately, they are also very troublesome for beginner students. Below Italian teacher, Nadia B. gives a quick and easy introduction to the two concepts…

Ready to explore Italian grammar? For students, gender and number are often the most challenging concepts to understand, since they are used very differently in Italian than in English. However, with a little explanation and practice, you will be using them with ease in no time. So, let’s get started!

There are exceptions to the above-mentioned Italian grammar rule. For example, nouns that denote inanimate objects are randomly assigned a gender. It is best to continually practice these words in order to memorize them and their gender. See examples below.

Also, don’t be fooled by nouns that are commonly shortened, as their long form reveals their true gender. See examples below. 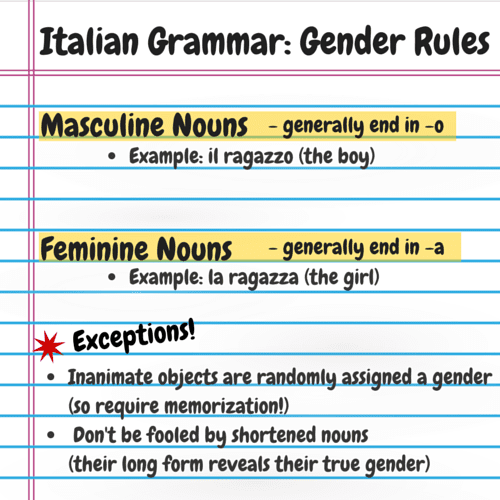 Once you’ve learned how to identify whether a noun is masculine or feminine, another important component to learning Italian grammar is how number affects nouns.

However, what happens when the ending is a little different to begin with? If it’s a feminine singular noun or adjective that ends in -ca or -ga, we want to preserve the hard sound, therefore, the plural then ends in -che or -ghe. See examples below:

Feminine singular nouns that end in -cia or -gia drop the -i in the plural and thus the ending becomes -ce or -ge. This is to preserve the same sound and syllabication that occurs in the singular. See examples below.

The only exception to this rule is in the case of la camicia (the shirt) which retains its -i in the plural le camicie (the shirts).

If the stress lands on the -i in the -cia or -gia ending, though, then the noun retains the -i in the plural, with the ending -cie or -gie. See examples below.

There are a few exceptions, though, like words originally from Greek and other ones that simply don’t follow the rule.

Here are some common words that are exceptions:

One last ending that changes from singular to plural is that of masculine nouns and adjectives ending in -go. These nouns change to -ghi in the plural. 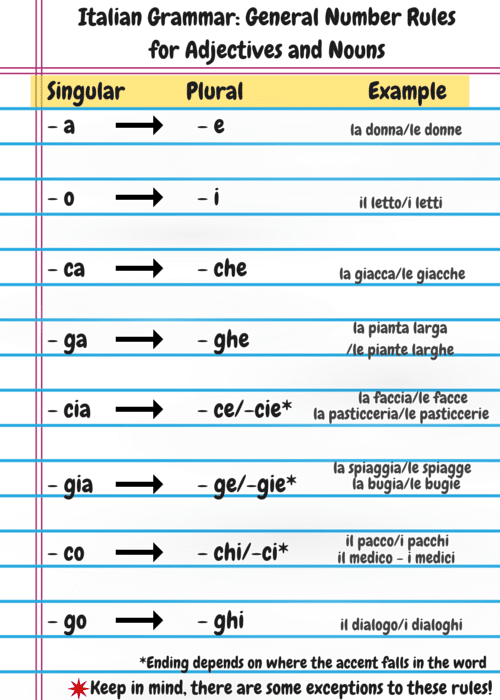 While there are many different Italian grammar rules to remember, they are not as difficult to learn as they may seem. In fact, after seeing gender and number usage in context and using them yourself, you will soon be able to distinguish between all the possibilities.

Work closely with your Italian tutor to come up with some fun exercises for you to better learn these complex Italian grammar rules.

Photo by Son of Groucho