Want your son or daughter to learn Japanese, but not sure if he or she is ready? Here, Montgomery, TX language teacher Emily G. explains how you can determine if your child is ready to begin Japanese lessons…

Are you considering teaching your child Japanese?

You might be wondering if your child is ready for the challenge and can learn Japanese successfully. There are a few things to consider when making that decision. In this post, we’ll take a look at some of the factors that go into deciding whether or not to start learning a new language at an early age.

Language learning can be a fun and rewarding experience for children of any age, but it’s important to consider all the factors involved before starting any kind of lessons.

For parents who are thinking about teaching their children Japanese, here are a few things to keep in mind.

Is it Hard to Learn Japanese?

Japanese learning is not particularly difficult – that’s true for both children and for adults. That’s because:

Of course, like learning any language, it does take some time and effort to learn Japanese. Working with a Japanese language teacher is your best avenue at success – check out the video below to find out more about the benefits of Japanese lessons for kids of any age:

How Should I Begin to Learn Japanese? A Guide for Parents

Even though I teach several languages, Japanese lessons are my favorite lessons. I love to see parents encourage their children to learn Japanese, however, this doesn’t happen too often, and I can understand why. Between the writing systems and the pronunciation, Japanese can be intimidating for a beginner. Many parents may think their son or daughter is too young to learn Japanese. I’m here to tell you why your child is ready to learn Japanese, now!

1. Children Learn at a Rapid Pace

One of the first things you will notice about spoken Japanese is that it’s really fast!  Japanese clips along at a rate that some studies show is faster than Spanish. You may think that this is too much for your son or daughter to handle, but it’s not too hard for children, at all.

Children learn language at their own natural pace, regardless of the nature of the language. If you’ve ever tried to rush a nine year old, you know it doesn’t work. With Japanese lessons, a child can work gradually, at his or her own pace, rather than tackling everything at once.

Additionally, children are full of energy, so they can easily adapt to a fast-paced language. In fact, studies have confirmed that children are able to learn things very quickly, which means it may be beneficial to begin language studies at a young age.

Finally, let’s consider what a child can gain from learning Japanese. When you learn to speak a fast language, your brain is forced to think and function faster. It’s essentially the same concept as timed Sudoku, Speed Chess, or a speed round in a memory game.

2. Children Can Learn Respect Through Language

The Japanese language has a specific honorifics system that dictates how someone should speak and behave. Honorifics are words like “Sir” and “Ma’am,” or “Mr.” and “Mrs.” At first, honorifics can be very confusing to new learners. A beginning Japanese speaker may not know which honorific to use when or with whom. The benefit though, is that through Japanese lessons, a student begins to pay more attention to personal relationships. The honorifics system can be seen here, when describing members of the family in Japanese.

By studying Japanese, your child will learn how to address others with respect, and how to speak to people using proper etiquette. When a child learns Japanese, he or she is forced to see relationships in a new light. This is a huge benefit for young students.

3. The Writing Systems are Based on Pictures and Symbols

In Western cultures, writing is similar to a math equation; you have a set of letters, and you add them together in the correct combination to form a word. Kanji is different. When you use a kanji character, you’re drawing a representation of an idea.

Associations are one of the primary ways children learn. This is why we use picture books to teach kids new words, and it’s why so many children love to draw and color. Japanese writing can be difficult, but it encourages artistic development and analogical thinking in a child.

Is Japanese Hard for Kids to Learn?

Japanese is a unique language that has many features that make it different from other languages.

For instance, Japanese has a complex writing system that includes both Kanji and Hiragana. In addition, Japanese grammar can be challenging for English speakers to learn.

However, these difficulties can actually be an advantage for young learners.

Children who are exposed to multiple languages at a young age often have an easier time picking up new languages.

In addition, the challenge of learning Japanese can help to stimulate a child’s brain development. As a result, while Japanese may not be the easiest language for kids to learn, it can still be a valuable and rewarding experience.

How Long Does it Take a Child to Learn Japanese?

There is no definitive answer to this question, as the rate at which a child learns Japanese can vary significantly depending on a number of different factors.

For example, a child’s native language can play a role in how quickly he or she picks up new vocabulary and grammatical structures.

Children who speak languages with lots of cognates (words that share similar meaning and/or letters) may find it easier to learn Japanese, as these similarities will help them transition more easily from their first language to Japanese.

In addition, some children simply show more interest in learning new languages than others, which can make the process go faster or slower.

Ultimately, it is impossible to say exactly how long it takes for a child to master Japanese, but with consistent practice and patience, he or she can become fluent over time.

How Can I Teach My Kids Japanese?

If you want to know how to learn Japanese, especially for kids, the good news is that there are many different approaches that you can take to educate your kids about the Japanese language and culture.

One option is to enroll them in a local immersion school or language program, where they will be immersed in Japanese from an early age and have plenty of opportunities to practice their skills.

Alternatively, you can try incorporating Japanese elements into your family’s everyday life by exposing your kids to music, books, TV shows, and other forms of media.

Other methods of learning Japanese include:

You can even learn Japanese free by checking out these websites!

Whether through institutional education or more informal methods, there are plenty of ways that you can help your children learn about one of the world’s most intriguing languages and cultures.

So is Japanese hard to learn for kids? Not necessarily!

Japanese is a great language to learn and your child can be successful with the right tools. With these tips, you can help make the process fun and engaging for your child. You may also want to try seeking out a tutor or class to provide additional support.

Remember, it takes time and practice to become proficient in any language, so don’t get discouraged if your child doesn’t seem to be making progress overnight. Stick with it and soon you will see amazing results!

These are only three example sof how kids can learn Japanese easily, but I hope you can see how learning Japanese is very feasible and beneficial to a child. Learning Japanese encourages a child to expand his or her learning, and helps him or her develop in new ways.

Want to get your son or daughter started today? Find a Japanese tutor near you! 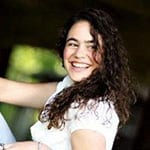 Post Author:
Emily G.
Emily G. teaches Japanese, Latin, and Greek lessons in Montgomery, TX. She earned her Bachelor’s degree in Classics from Texas A&M University and later went on to receive her Master’s Degree in Ancient History from the University of Nottingham. She has been teaching since 2009. Learn more about Emily here!

Photo by {bathe in light}