Are you interested in learning how to write poetry? A great exercise to try is taking an already-written piece, and deconstructing it. Below, Tucson tutor Lourdes C. explains the method…

If you’re a word crafter and you’ve found your words growing thin and inadequate, maybe even trite and boring, try this original constructivist approach from an applied linguistics perspective to see if you can’t get the impact back into your work and cure writer’s block. The method operates on the principle that language is socially constructed, and that these constructions, often taken for granted, can actually obstruct creative original language.

Begin with any poem you’ve written and subject it to this crucible to galvanize it back to life. The method is analogous to brick-laying and is named and described accordingly.

First, look at a poem, yours or someone else’s, and identify the “bricks” in it. Bricks are words with multiple meanings, words that have two functions (function both as a noun and a verb, for instance as in ‘Can you run a mile?’ – verb, and ‘I got a run in my stocking’ – noun), and words and/or phrases that are especially descriptive and evocative of sensory perception. Here is an example of a rough draft of a poem that was revised according to this method, called “Sprinter”.

“I run with foot-falls like tom-toms, sweat sloughing off in rivulets, sky-eyed, micro-seconds are like hours, tendons screaming, ‘The sky is falling! The sky is falling!’ The earth is a drum-head stretched eternally taut beneath the batons of a sprinter’s feet.”

Pair bricks together in original ways for greatest impact and rebuild from there, adding in associated ideas and phrases, omitting the weaker words, and keeping the most concrete descriptors. This yielded, ‘Tom-tom foot-falls, sweat sloughs off in fiery rivulets, burning palms, sky-eyed against the wind, grinding pain, mercury wings fly, heaven-bound.”

Arrange pairs and phrases without articles, pronouns, adverbs, or extraneous language (no, ‘the’, ‘an’, ‘this’, ‘that’, personal pronouns, ‘quickly’, ‘fast’, ‘well’, etc.). Omit words or add new word pairs and phrases as they come to you. In this case, the greatest impact came from eliminating all connecting words. Choices should always be dictated by impact. The final revision:

As is, this brick-poem captures the essence of running so hard and so fast toward an unattainable goal despite pain and physical limitations that the runner is flying. But if you want to develop your poem further, you would add in only the grammar and syntax (the “mortar”) necessary to make complete thoughts or phrases. For example, the poem above could be extended metaphorically to other aspects and concepts of life, such as a rat-race, unrequited love or unswerving commitment to a passion, anything that requires “eyes on the prize”. In this method, each such mortared section is referred to as a “mold” and the entire work is a “mosaic inlay”. Read these mosaic inlays to friends and critics and have them judge the new work for impact and originality. Then you can revise accordingly, but now you know how to create impact. Best of all, your work will be truly original and distinct, recognizable as yours and yours alone. This could yield a particular market advantage if you’re actively publishing.

Notable Observations and a Challenge

This method resembles something developed by the Old Norse skalds (poets) called ‘kennings’. A basic kenning was created by substituting one component of an object for the object itself, and then pairing it with an associated element. ‘Kenning’ means ‘to know’, and in poetry and sagas such as Beowulf, kennings were used to name something indirectly but descriptively. In order to understand the kenning, one had to know how the two elements of the pairing were associated. Whales use the sea to travel and seals bathe in the sea; thus, sea became ‘whale- road’ and ‘seal-bath’, among other things. Even if readers no longer know the precise meaning of the components of a kenning, the vital impact and essence is retained. For instance, more than an eon after it was first used, the kenning ‘wound-wolf’ or, ‘wolf of wounds’ still describes something that causes bloody injury to others. Originally, in fact, it was the common kenning for ‘sword’. Truly universal interpretation is completely attainable if familiar conventions are deconstructed. As the adage says, “In order to make new rules, you must first learn the old ones – so you can break them properly.” So as you learn how to write poetry, try this on as a challenge: take any poem and rewrite it using only kennings you create. Even with brand new words, the poem’s essential meaning will be preserved, only now it will impact the reader like a “bag of bricks”. 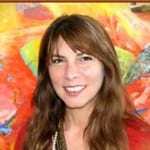 Lourdes C. teaches various music subjects and tutors in Tucson, AZ. Her doctorate is in Applied Linguistics and American Indian Studies. She has been an instructor and tutor for over 20 years for academics, research methods, languages and literature, and music as well. Book in-person or online lessons with Lourdes here!