When you’re learning guitar it’s important to learn a little bit about the instrument’s origins. From the early designs to amplification and the story of rock “n” roll, here’s a look back at guitar history from Denver, CO instructor Kirk R…

The old origins of the guitar are rarely talked about. Many people believe that it’s a newly-invented instrument for folk and pop music, however, there were guitars and similar instruments long before familiar instruments like the piano or violin.

Most people believe the guitar evolved from the lute, which was used by troubadours during the renaissance. The lute had four strings which you had to pluck.  Though there were fretted and plucked instruments like the lute around much earlier, it’s safe to say that the guitar, in some fashion, was popular by 1500.

The big difference is that all of the strings were paired, much like on a modern 12-string guitar. Here’s an engraving from 1510 that shows us the existence of these instruments. 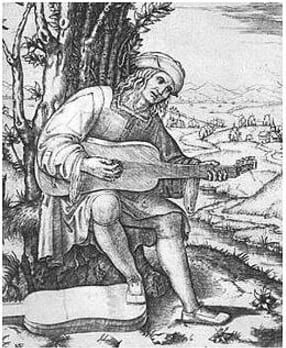 The first major development in the guitar was moving from double-strung (and sometimes even triple- strung) instruments to guitars with only one string per note. It took hundreds of years of playing the double- and triple-strung guitars before the single strings caught on.

Even then, it was only the highest string that was a single at first. The previous tunings for multi-strung guitars were wildly inconsistent and wouldn’t always work for different pieces.

Imagine having to re-string your guitar mid-set! Because of this, the single-string trend caught on and quickly took over after the early 1800s.

A New Design and Steel Strings

Sometime in the 1840s, now famous guitar maker Christian Martin (does Martin Guitars sound familiar?) invented a new way of bracing guitars. The X-brace was stronger and easier to produce than previous designs.

Some found the stiffly-braced tops overly quiet, which resulted in the first production of guitars with metal strings. This was previously next to impossible, as the older designs couldn’t stand up to the tension of metal strings.

Despite the common misconception, Les Paul did not invent the first electric guitar. George Beauchamp and Adolph Rickenbacker (whose company still bears his name) invented what they called the “Frying Pan” in 1931, about a decade before Les Paul’s prototype.

While there were previous attempts to electrically amplify the guitar, it was not until Beauchamp and Rickenbacker created their magnetic pickup that it became a reality. Beauchamp was a Hawaiian Steel guitarist, which is the genre that truly prompted the creation of the electric guitar. The guitar was a more prominent melodic instrument in Hawaiian style guitar than in many other genres, and it was becoming increasingly difficult to hear over the growing bands.

Here’s how we might have heard it played for the very first time:

In 1951, Jackie Brenston, Ike Turner, and the Delta Cats were on their way to record when the guitarist’s amp fell from the roof of the car. (Tip for you future touring band members: rent a big van!)

The speaker cone inside the amp tore from the impact, completely destroying the loud, clean sound. Not willing to give up, and not having money to get a new amp, the band rolled with the new sound and created the first guitar distortion.

The result is this history-making recording of “Rocket 88”.

About five years later, the band Rock ‘n’ Roll Trio made a similar discovery that they could achieve the same tone through loosening electronic components in their amps.

Computers, Internet, and the Guitar Network

I debated including a number things in this section. In the last 60 years, so many things have changed the guitar and the way that it’s played. There are all sorts of computerized effects that began popping up shortly after distortion.

Jimmy Page popularized the idea of bowing an electric guitar. Players like Yngwie Malmsteen took electric guitar virtuosity to a whole new level. But all of these seemed like small steps to me. If I had to pick one thing that has had the biggest impact on guitar playing in the last 60 years, I would bet that you’re using it right now as you read this post!

Most of you reading this have probably not seen Led Zeppelin perform live. You probably weren’t around when the first effects processors were invented. How is it that you get to see videos of Led Zeppelin concerts or hear the first commercial electric guitar model? I think that the internet has helped more guitarists to learn from masters (and less-than-masters) from all over the world than ever before.

Sites like Ultimate-Guitar.com make it easy to see transcriptions from other guitarists of almost any song you might want to learn (not to mention see various versions, transpose, and a host of other tools). YouTube allows us to watch performances or up-close lessons that we would never otherwise have a chance to see, and right here at TakeLessons, you can sign up for live, one-on-one lessons (plus free live online classes for a limited time).

The internet continues to rewrite guitar history, and creates endless opportunities for new players to learn and grow. You can search for artists who inspire you, learn new techniques, connect with other guitarists, and so much more!

So now that you know some important aspects of guitar history, it’s time to write your own story. Get started today with a guitar teacher near you!

Post Author:
Kirk R.
Kirk is a classical, bass, and acoustic guitar instructor in Denver, CO. He earned a bachelor’s of music in Guitar performance at The College-Conservatory of Music in Cincinnati and he is currently pursuing a masters degree in performance.  Learn more about Kirk here!

6 thoughts on “A Look Back: 6 Major Milestones in Guitar History [Infographic]”