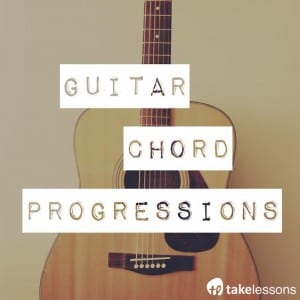 Did you know there are a handful of common guitar chord progressions that are repeatedly used throughout hundreds of songs?

If you’ve spent much time on YouTube, you might be familiar with the Axis of Awesome. In their popular video, the Axis of Awesome performs a compilation of around 50 songs in under six minutes, all while using the same guitar chord progression.

The video is very entertaining as it creatively reveals a secret that professional musicians have known for decades.

Although most popular songs are based on just a handful of guitar chord progressions, sometimes the chords are modified (adding a 7th or 9th for example).

They can also be played in a different order, or using different instruments and grooves. So to the untrained ear it may be hard to detect the same underlying chord structure.

Once you understand how the most common guitar chord progressions work, it will open the door for you to play thousands of songs easily. Let’s start by learning about some of the most basic guitar chords.

If you’re just getting started on the guitar, you’ll want to learn a few basic chords first. The chord charts below show five of the most common open chords. Open chords are chords where some of the strings are played “open”, without holding down any of the frets.

To read the chord charts, imagine that the top line of the chart is the nut, where the neck of the guitar meets the headstock. Each of the six vertical lines represent a guitar string, with the low E string at the far left and high E at the far right.

Each horizontal line represents a different fret on the fretboard. The numbers along the bottom of the chart let you know which finger on your left hand should fret each string. Your left hand fingers are numbered one through four, starting with your index finger.

Now, strum from the A string down. The X at the top of the diagram indicates that you should not strum the low E string.

A chord progression is a pattern of usually three or four chords that is repeated throughout a song. Some songs use a couple different guitar chord progressions, switching back and forth for the verse and the chorus.

You might find other songs that use a single chord progression the whole way through. 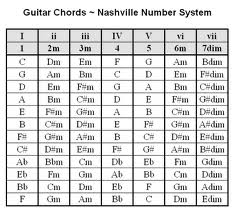 The Nashville system encourages musicians to focus more on the relationships between notes rather than the notes themselves. This is particularly helpful if you are playing with a singer or another musician and they ask you to change the key you are playing.

Rather than scrambling to transpose the song, using your familiarity with the relationships between guitar notes, you can quickly and easily switch keys.

The I-IV-V chord progression forms the foundations of countless classic songs and contemporary favorites. According to Ultimate Guitar, the I-IV-V progression, with slight variations, can be used to play the following songs:

Want to learn to play all the songs from the Axis of Awesome video we shared about? Just get familiar with the I-V-vi-IV chord progression and you will have all 50 songs (and many more) in the bag!

You can play all the songs from the video using the chord progression C-G-Am-F, plus:

These progressions are commonly seen in jazz standards, though they do creep into pop songs from time to time. Using an ii-V-I progression, such as Dm-G-C, you can play songs ranging from the jazz favorite “Autumn Leaves” to Justin Bieber’s “Boyfriend.”

Now that you are familiar with the most common guitar chord progressions, memorizing the chord patterns and practicing will help you get to the point where you can easily learn hundreds of songs.

If you’re just starting out on the guitar, changing from one chord to another quickly and smoothly might be challenging for you.

Choose a chord progression and practice strumming each chord slowly and evenly for four counts. Try to keep your transitions on tempo with the pace you are playing.

Once you feel comfortable changing chords, try playing one song in a few different keys. As you play, sing or hum along to hear the difference. 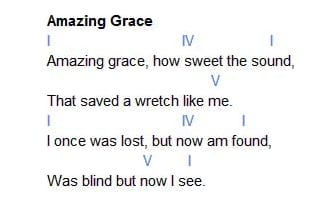 Try playing “Amazing Grace” as pictured above in the key of C and then move it to the key of G. Changing keys helps you to hear the relationships between notes, which makes it easier for you to develop your ear.

Write Songs of Your Own

Another great way to apply these guitar chord progressions is in writing your own songs. Don’t feel like you have to use only these chords. Instead, use them as a starting point to explore your musical vision.

If you’re just beginning to write your own music, it helps to know which chords will sound good together. Try taking one of the tried and true chord progressions you’ve just learned and put your own spin on it by adding or subbing a new chord, or playing it with a funky rhythm.

For more help with guitar, private lessons with a qualified instructor are the best way to sharpen your skills. The right teacher will give you the personal attention you need to make your dreams a reality.

TakeLessons guitar teachers are qualified, pre-screened, and can help you understand more about guitar chord progressions. Search for your perfect guitar teacher today!