Have you noticed repeated beginnings or endings in French words? French tutor Tyler S. breaks down the most common French prefixes and suffixes you need to know…

Why Prefixes and Suffixes?

Have you ever wondered why languages have historically developed what grammarians call “prefixes” and “suffixes”? Why do almost all languages demonstrate these two types of word alteration when there are other ways to express the same changes of meaning? The answer is simple: prefixes and suffixes save us time and energy when using language.

Although you may know someone who possesses the super human power of relentlessly babbling on for hours, people typically aim to be informative and concise in language. By adapting over time to use prefixes and suffixes instead of multi-word phrases, language has evolved to conserve time and energy when used as a communicative tool. For example, it takes far less brainpower to attach the prefix “a-“ to the beginning of “typical” to form the word “atypical” than it does to express the equivalent meaning in the multi-word phrase “the opposite of typical”.

In all languages around the world, words are composed of individual “building blocks” that combine to modify and create meaningful expressions. The first step is to be able to identify if a given French word falls into the noun category, the adjective category, or the verb category. This is vital to learn because in French vocabulary words have rules for which suffixes or prefixes can combine with each of the three categories.

For example, the suffix -able in English may only attach to some verbs such as the verb “do”. We combine the two to get do + able = doable. You cannot merely attach -able to any word in English, and the same rule applies in French. In many ways, English and French are close relatives because their usage of prefixes and suffixes are historically linked.

Now that you understand how word formation in French plays by the rules of a word’s grammatical category (noun, adjective, or verb), here are some concrete examples to study. Below are two tables that list prefixes or suffixes in the far left column. The next column listed as “Root Type” provides the type of word the prefix/suffix can combine with (noun, adjective, or verb). The middle white column is the approximate English meaning that the prefix/suffix attributes to the root word, and this column is then followed by examples in French that include the given suffix/prefix. 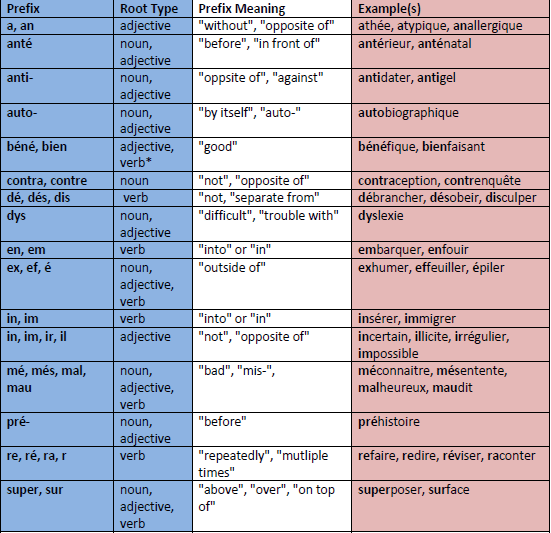 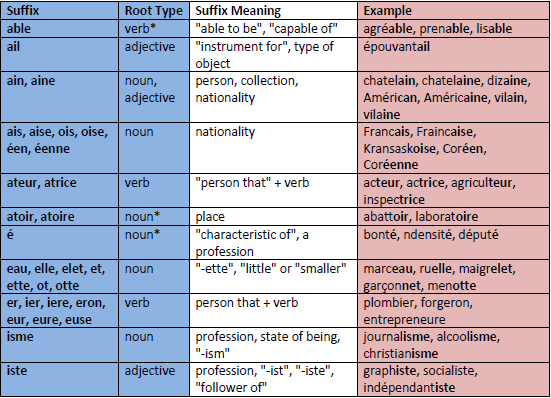 By studying these two tables, you will greatly improve your vocabulary skills and your fluency for the French language. For a more exhaustive list of prefixes and suffixes, please reference the following links:

For more help learning French, try studying with a private tutor. Tutors are available to work with you online or in-person depending on locations and availability. Find your French tutor now! 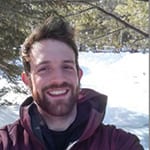