French pronunciation is full of little tricks that trip beginners up. Tutor Annie A. shares her tips for pronouncing the letter T…

Try reading the following French words aloud: tarte, partons, portions, democratie, septieme, mangeaient, amitie, and vert. Do you pronounce all the T’s in the same way? Do you pronounce them at all?

There are no simple answers, and you will run into many questions about the letter T as you practice proper French pronunciation. There are many different rules that govern whether you hear a T sound, an S sound, or nothing at all. And as with many other things in the French language, there are always exceptions to those rules.

First of all, the French pronounce the letter T slightly differently than English-speakers do. In French, your tongue rests against the tip of your upper front teeth, whereas in English your tongue stays behind your teeth. This tongue position results in a softer and smoother T in French.

When to Pronounce the Letter T

Always pronounce T when it comes at the beginning of a word.

You will also always pronounce double-T’s.

Th- is pronounced just like T because the H is silent.

T is also pronounced when it is at the end of a word and followed by E.

In many nouns and adjectives, words ending with -te denote the feminine form.

In cases where ti- is followed by another vowel, it is pronounced as the sound “sy.”

Exceptions to the Rule

However, as always, there are exceptions to the ti- rule.

When ti- is followed by a vowel but preceded by S, you will pronounce the letter T.

You also pronounce T in all forms of verbs ending in -tions and -tiez.

T is pronounced in all forms of verbs and nouns derived from the verb tenir, even the forms in which ti- is followed by another vowel.

T is also pronounced in ordinal adjectives ending in -tieme.

And in feminine past participles of verbs ending in -tir.

Pronounce your T’s in nouns and adjectives ending in -tiers or -tiere.

There are still other exceptions to the ti- rule. For example, pronounce the T in the following words:

Liaisons or Linking Sounds in French

The practice of linking a word ending in a consonant with the following word beginning with a vowel is compulsory in some cases. Often, liasons will cause you to pronounce T’s that would otherwise be silent.

When an adjective ending in T precedes a noun that starts with a vowel, the T will be pronounced, joining the two words together.

T is also pronounced when a word starting with a vowel follows est.

Third person verbs, singular or plural, ending in T link with the following word starting with a vowel.

When is T Silent or, as the French Say, Muet?

When T is the last letter of a word, it is silent.

However, there are a few words that are exceptions to this rule. Always pronounce the T at the end of the following words:

The T in et is always silent. Never make a liaison with et.

When a verb ends in -ent, the -ent is not pronounced.

When a verb ends in -ait or -aient, the T remains silent.

When a word ends in -at, the T is silent.

With so many rules and exceptions it seems a daunting task to learn French pronunciation, but it is not so. You can get used to the correct pronunciation by studying with a qualified teacher and practicing every day. Listen to as much spoken French as you can, keep working hard, and someday those tricky T’s will come naturally to you!

Master French pronunciation with the help of a private tutor. Tutors are available to work with you online via Skype or in-person depending on locations and availability. Search for your French tutor now! 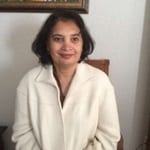 Annie A. is a French instructor whose lessons are conducted exclusively online. Teaching for the past 12 years, she found her passion for the language while studying in Paris as a teenager. Learn more about Annie here!

One thought on “French Pronunciation Guide: When to Pronounce the Letter T”