Performing a monologue is much different from acting as part of an ensemble! Make sure you’re ahead of the pack with these tips from New York City actor and teaching artist Jasmine B…

We all want to be that actor that everyone wants to work with. I’ve been in quite a few ensembles (one I’ve had the pleasure of being in for four years!) and have found some keys to working well with others and producing quality work. Here are a few simple ways to improve your ensemble acting and become that kind of quintessential artist in your rehearsal process!

1. Give Specific and Positive Feedback

A voice teacher of mine and coach to the stars constantly reminds us to “Celebrate before you flagellate!” which basically translates to “Give yourself a pat on the back before you punish yourself for whatever you think you did wrong.” This not only applies to the way you talk to yourself about your work, it definitely includes the way you talk to your castmates and collaborators about their work and the work in the room, period. As artists, we can be pretty sensitive about the product we put into the room, especially if we’re in process. A little acknowledgement can go a long way.

Also, if someone is feeling down about their process, don’t hesitate to be there for them. Try to eliminate director-bashing or production-slamming in this process, as it’s only a cheap way of making someone feel better. Be specific and kind in your support, and let them know you care and are proud of the work they are doing.

2. Ask Questions Instead of Attacking

If you have a criticism or a problem with another actor or collaborator in the room, it’s best to approach the problem directly, with an indirect phrase. For example, say an actor keeps forgetting his or her lines in a crucial part of the play. It may be pretty frustrating (useful, nonetheless – remember everything can be used!), but there is a way of helping both your partner and yourself.

When it comes to ensemble acting, putting the problem on yourself is a great way of coming to your partner’s rescue and motivating them to put more effort into the work. If you accuse them of not knowing their lines or being there for YOU, it will more than likely cause them to do the exact opposite of what you want to happen. If you’re feeling stuck in a scene, suggest some outside improv or an activity to loosen BOTH of you up. Never blame anything on your partner – you’re in it together, so you should solve it together.

3. Try Anything Once (Within Reason)

It happens more often than you think: a director or collaborator asks you to try something that you don’t think your character would do, given the circumstances, time period, personal prejudices, etc. Try it anyway. If it doesn’t work, it will be obvious to everyone.

This, of course, does include anything that you puts you or your collaborators in physical, emotional, mental, or any other kind of harm. Be safe and look out for each other!

Recently, I saw a Broadway production starring a major movie star. It was actually pretty fantastic – the production was full of wonderful actors, great direction, a fantastic script, and it seemed like the ensemble really fit together and enjoyed being with each other. At the end of the play, they all took a bow together – even the movie star in the leading role. He wanted to be with his company instead of apart from them. What a concept! So simple, yet it said so much. Here was a man who had millions of dollars at his disposal, and could have done whatever he wanted on that stage, and instead he chose to be a member of an ensemble. He chose to let the audience acknowledge the work instead of work the audience. In short, put the work and the ensemble effort first. The art isn’t about you; you are serving the story.

5. Being Early is Arriving on Time

We all love those actors who come to rehearsal warmed up and ready to work. They don’t have to warm up into the role or get used to the day while they’re in process with you – they are ready and willing to do the work as soon as it’s time to. They get to the space early, they warm up, and they’re ready. And even if they can’t get to the space itself before rehearsal, they’ve found a way to warm up at home, while in transit, or somewhere in between. You can be one of those actors too. Come early to be right on time. This is also helpful in daily life –there is nothing more kind than being where you said you were going to meet someone exactly when you said you were going to meet them.

Happy rehearsing, and good luck with your ensemble acting! 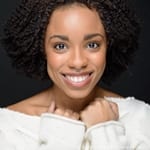 Jasmine B. teaches speaking voice, stage performance, and acting in New York City. She studied acting from a young age, graduating from the Cobb County Center for Excellence in the Performing Arts, and Wright State University’s Professional Actor Training Program. She currently serves as an educational outreach fellow for the Juilliard School.  Learn more about Jasmine here!